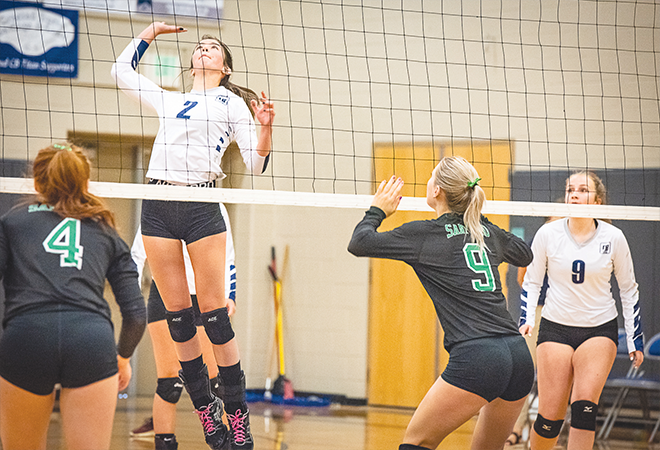 With a new coach comes a new way to play the game and new positions, but as far as coach Erin Goggins can tell, her Crested Butte Titans volleyball team is taking to the changes and starting to get their feet underneath them.

They opened the season last week with matches against Norwood and Caprock Academy and while they dropped both, Goggins attributes the losses to two major factors.

“I think some of it was first-match jitters,” says Goggins. “They definitely had some kinks and some of that was my new rotations and having them play in new positions.”

The Titans returned to workouts for the week and then headed back into competition play on Friday, August 30 with a little more experience under their belts with the new systems. Their progression was immediately evident as they took down Centennial in four games and then beat Mountain Valley Moffat in three.

The Titans then had a major test on Saturday, August 31 when they hosted perennial league powerhouse Sanford. While the Titans stepped up their game for the challenge, they still fell in straight sets.

“The girls definitely played up but Sanford exposed some of our weaknesses,” says Goggins. “I’d call it a learning match. Those weaknesses won’t be a problem anymore. The girls are ready to fix them.”

Goggins has three seasoned veterans who are in new positions this year and already learning the ropes and she has a solid corps of seniors helping to lead the way.

“I have a lot of strong seniors stepping up in their leadership roles,” says Goggins. “They’re adapting and showing their strengths now.”

The volleyball team hits the road this Friday, September 6 to face Custer County and then will play in a tournament in Gunnison on Saturday, with matches at 9 a.m., 11 a.m. and 1 p.m.

“I’m looking forward to trying out different rotations and trying some girls in new positions,” says Goggins, “making sure everyone can play where they are needed. They’re ready to get more play in and I’m excited to see what they have in them.”