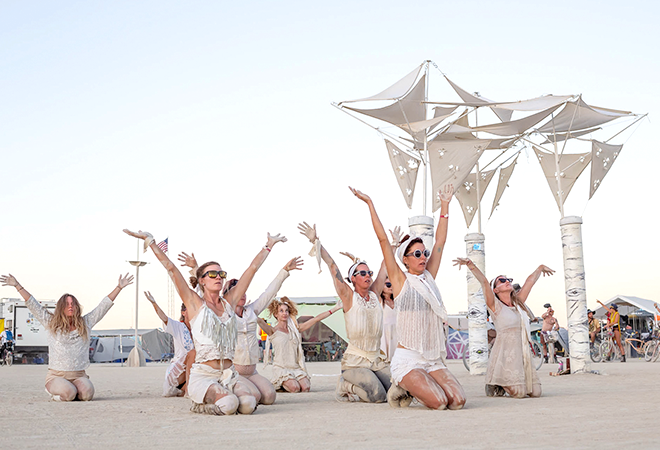 See Trees on the playa

Aspen trees; a familiar view for us here in Crested Butte, as we eagerly await their changing colors in the coming weeks and dream of weaving around their trunks in untouched powder this winter. Not something you’d expect to see out on the barren playa flats of the Nevada desert. But local artist Heather Bischoff brought just that to the Black Rock Desert this summer with her latest art project, See Trees.

Black Rock City, Nevada exists for only nine days of the year during a little festival we know as Burning Man. A gathering of artists, performers and all creatives in-between, approximately 70,000 people flock to the Black Rock Playa every August to build up a temporary city and dismantle it a week later without a trace left behind. And among all the merriment and festivities that ensue, Burning Man inspires art and people from all walks of life to achieve the nearly impossible: to thrive in an extremely harsh environment in the middle of nowhere. Something, many would argue, that aspen trees have also achieved in the harsh, remote environment of our little Colorado mountain town.

Bischoff created See Trees with the intention of bringing it to Burning Man, as an interactive art sculpture that invites one to examine their relationship with nature in modern society and see “what the trees see.” The installation of aspen trees includes peepholes to different scenes, or realms, hidden in each tree trunk. A group of eight Crested Butte artists contributed mixed media images, dioramas and videos to 15 unique scenes. The trees are all connected with a canopy to represent the branches and leaves, as well as the interconnected network of a natural aspen grove.

Leading up to Burning Man, Bischoff built and featured See Trees at various Crested Butte events throughout the summer, including Bridges of the Butte and the Crested Butte Arts Festival. “This process has been 10 months in the making,” she said. “Burning Man was the finale of my initial vision. We had a lot of opportunities with the local shows leading up to troubleshoot and make design revisions that set me up for ease and success on the Playa.”

On setting it up in the desert, “I was just focused on building it strong enough to endure the elements out there,” Bischoff said. “It’s such a sterile, hostile environment with no vegetation. I was most nervous about the winds out there. It’s nasty what they can do to your camp, your art, your bike, your body … We had to rig the canopies as tight as possible. In general, I was super-psyched on how it performed. Nothing broke!”

Most of the artists who contributed to the realms also attended and a group of Crested Buttians helped with the installation out there. “The crew was fantastic,” Bischoff said. “It was important for me to keep it human-centric. I wanted to build it with people rather than equipment. We were pretty dialed and had a good division of specialties.”

The experience also took Bischoff’s artist hat to a new level. “In a way it put me in a brand new role as logistics manager, streamlining and communicating and delegating tasks,” she said. “That was really transformational in my experience as an artist. It’s bigger than me now—I can’t do it alone!”

The Burning Man organization assigned See Trees to a main plaza of the city that saw lots of traffic. Bischoff met many admirers of the piece. “You get the face-to-face feedback and it’s really sincere,” she said. “Out there we’re all in this experience and the art is so immersive and interactive. If you spend 10 minutes in one place, someone is going to come by and you get to engage with them. It was so inspiring and exciting to me and why it’s worth going to these lengths of harsh environments and driving halfway across the country. That is the ultimate reward for me.”

Bischoff also collaborated with Sasha Chudacoff of the Crested Butte School of Dance to add a movement/performance component to See Trees for Burning Man. Chudacoff created a 45-minute presentation of dance scores for See Trees, which was performed by an all-female group during sunset one evening. “It took a lot of teamwork and collaboration to make that work,” said Chudacoff. “Observers were generally quite captivated by what we were doing. I think people were very grateful; they didn’t want us to stop. And by the end, people who had been watching wanted to jump in.”

Chudacoff had originally encouraged Bischoff to take her art to the festival this year, and Bischoff explained that See Trees wouldn’t be what it is today without Chudacoff’s partnership. On her inspiration for the dance scores, Chudacoff explained, “I thought Heather’s concept was very potent and timely with our environmental crisis right now. I’m really into how the state of the earth is impacting us as humans. How as humans can we develop a kinesthetic entity for what nature is going through? Luckily, in Crested Butte we don’t have to be concerned because nature is very accessible. But generally the human relationship to nature is really disassociated to a lot of people.”

On working with Bischoff, Chudacoff said, “I get really excited to collaborate with artists who are not always coming from the dance side of things and vice versa. We got a lot out of co-creating together; Heather’s process was much more collaborative and involved a network of people, almost like a spider web.” Or an aspen grove.

The performance was a highlight of the week for Bischoff. “I felt so honored to participate in that. I felt really viscerally connected to the trees and this sense of home. We were down in the Playa dust picking up the earth and fully connected to it and it was so refreshing. Maybe that’s part of our spirit that we bring from this mountain town—we all work hard and can appreciate playing in the dirt and breaking a sweat and being attached to the earth.”

Bischoff observes a lot of parallels between Burning Man and Crested Butte, two places that seem to foster a special sense of community unlike any other. “A big reason I landed in Crested Butte is that I felt it held a lot of values that people live out on the Playa,” she said on moving here in 2013 right after her first trip to Burning Man. “After every Burn I aspire to bring the Playa home with me.”

Within Crested Butte, there’s a cornerstone community of about 25 to 30 people who attend and create art for Burning Man every year. “That’s significant, that connection feels very culturally rooted,” said Bischoff. “The type of community we hold and the values we live by here translate to what draw people in at Burning Man.” And anyone in town will tell you, legend has it that Burning Man was inspired by our very own Vinotok celebration, when the festival’s founders witnessed the burning of the Grump and bonfire ritual here in Crested Butte.

Now decompressing after a big summer for See Trees, Bischoff plans to continue the project and is looking for additional fundraising outlets to grow the grove. “The trees are still very much in their infancy,” she explained. “What happened on the Playa is a prototype. I want to grow the project in multiples, I envision 20 of what I made for Burning Man.”

Inspired by Chudacoff’s movement contribution to the piece, Bischoff wants See Trees to become more than just an interactive sculpture, but also a venue. “I love collaborating with her,” added Chudacoff. “I’d love to continue to develop the work that we created on the Playa.”

Bischoff wants See Trees to continue to be a platform for environmental consciousness and has several events in the pipeline, including the Crested Butte Iron Pour on October 5 and Mr. Jingles Bash on October 12. She is also considering organizing a semi-annual Crested Butte event to display the trees. To learn more about See Trees, to get involved or to help fundraise the project, visit the See Trees Instagram page @see.trees or go to www.bishproductions.org/see-trees.