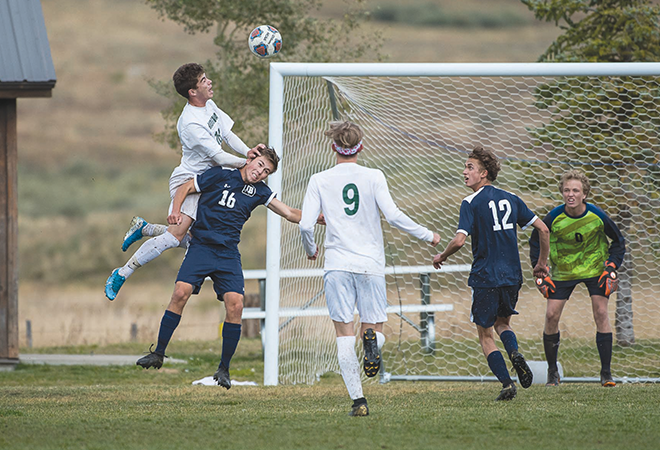 After starting out a stout six-game test winning two and losing two, the Crested Butte Titans soccer team finished on a positive note to improve to 6-2-1 overall.

They met another tough opponent on Tuesday, September 17 when they hosted the Ridgway Demons and, while they ended up with a 3-3 draw, the team proved they’ve got some intangibles that can pay off as the season continues.

Ridgway struck early in the game as they converted on a set play two minutes into regulation but Crested Butte responded just three minutes later as Nathan Miller pushed wide from his position to carry the ball to the corner and fire a cross into the 18-yard box. Both strikers Dagan Schwartz and Gabi Marmolejo were crashing the area and after Schwartz got a tip on the ball, Marmolejo stepped to the loose ball and poked it through.

The Demons continued to set the tone and pace for the game in the first half though, as heavy pressure on the Titan midfield offered up several attacks for Ridgway. Crested Butte’s back three remained composed and in control in the defensive third, but a long ball from near midfield caught Titan keeper Alex Eldridge out of position and bounced high into the back of the Titans’ net for a 2-1 Ridgway lead at halftime.

“There was some nervousness and they didn’t believe in the ability to play with Ridgway,” says coach Bob Piccaro. “They were hesitant and reactive instead of the opposite.”

A different Titans team took the field for the second half. After playing most of the first half chasing the Demons and scrambling on defense, Crested Butte upped their game to establish more presence throughout the pitch.

The effort paid off just three minutes into the second half when Schwartz ran onto a through ball on the flank to play a cross and Marmolejo slipped in to push the ball through, tying the game once again 2-2.

The celebration was short-lived though, as Ridgway retook the lead once again three minutes later, continuing to test the resolve of the Crested Butte team. The Titans remained composed through it all though, and while a couple of close-in chances missed the target and Ridgway’s keeper came up with some great saves, the Titans refused to panic.

They finally tied the game back up in the 65th minute when Carlos Franco played a long ball up to Marmolejo and he turned on one defender and fired a shot from 45 yards out over the keeper to tie the game 3-3.

The two teams continued to battle through both overtimes but neither managed to score the Golden Goal, leaving them with a 3-3 draw.

“When they actually believe how good they can be, they play well,” says Piccaro. “They showed resilience, didn’t cave when they fell behind and started believing in themselves.”

Three days later the Titans headed into the lion’s den in Telluride to face the Miners for another classic ski town throw-down. Each team brings their effort and intensity up a notch for the game and Friday, September 20 was no different.

The Miners looked to break down the Titans’ defense with numerous long balls to their strikers but Owen Berv, Finn Smith and Eric Lain remained spot-on in the shape and winning a majority of the balls out of the air. Meantime, midfielders Kye Matlock and Nathan Miller worked hard to scoop up loose balls and try to find openings in the Miners’ defense. Telluride’s effort matched Crested Butte’s and the teams were locked in a 0-0 tie until the 36th minute, when Marmolejo followed on a shot by Chris Myers to break the seal for a 1-0 Titans lead at the break.

“They set the tone from the start of the game, winning 50/50 balls, reacting well to the flow of the game and conscious about winning second balls on such a small field,” says Piccaro.

The Titans struck early in the second half to take a 2-0 lead when Franco slipped a pass wide to Josias Navarette running through. Navarette collected the pass and crossed it into the box, where Marmolejo beat the Miner defense to the ball to poke it past the Telluride goalie.

Three minutes later the Titans tacked on a third goal as Marmolejo drove a free kick low and on frame, causing problems for the Telluride keeper. The ball bounced loose and a scrum ensued that ended with the ball trickling over the line for a 3-0 Titans lead.

The tide turned for a brief time midway through the second half when a red card left the Titans playing a man down and Telluride converted on a penalty kick. But the Titans’ resolve proved the difference as they held on to seal the 3-1 win.

“Our bench is showing that they are strong and we were able to get players in to remain fresh,” says Piccaro. “We were working as a unit, controlling the space and we held our positioning well. Even with just one guy up top we still had a presence on offense.”

The Titans return to the road on Friday, September 27 when they head to Alamosa to face the Mean Moose. They will return that evening to then host their annual Homecoming game against Pagosa Springs on Saturday, September 28. Kick off for the varsity is at 11 a.m., with the JV slated to play at 1 p.m.