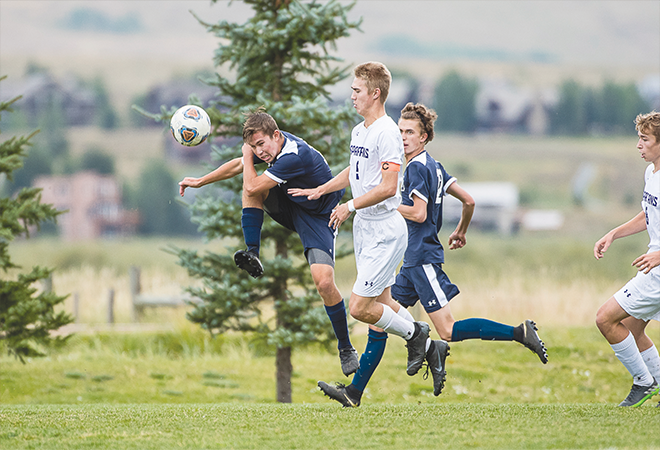 “More positives to take out of it than negatives”

Every year the Crested Butte Titans draw non-league opponent Salida early in the season for a good test of where they stand as a team. Some years, they fold and lose by a lot. Others, they remain in the hunt until the game gets away from them late. Only once in the past 15 years have they beaten Salida.

On Tuesday, September 10 the Titans turned themselves inside out, trading off surges in play through all 80 minutes but ultimately fell 1-0 to Salida.

Crested Butte opened the game tentative and unsure of their abilities as Salida dictated play in the midfield, looking for seams in the Titans defense. Fortunately, the back line of Owen Berv, Finn Smith and Eric Lain were on point both in one-on-one situations and in positioning to turn the Salida attack away.

“There was a lot of running around and a lot of defense,” says senior captain Chris Myers. “I think we played a little intimidated.”

Then, 10 minutes into the game the Titans got a great chance on goal as Gaby Marmolejo slipped free but was denied the back of the net. Still, the glimmer of hope shifted the momentum in Crested Butte’s favor.

“I think when Gaby got through for a shot that gave us a lot of confidence,” says Myers.

Among the Titans’ overall solid play, Salida did get two clear looks on net but both shots banged off the post and the teams were locked in a 0-0 tie at the half.

“We started to play our game, using our flanks and running down balls and working as a team,” says Myers.

Crested Butte came out flat again at the start of the second half and while midfielders Nathan Miller and Kye Matlock did what they could to support the back three more, Salida kept pressing. The effort of Salida eventually paid off 15 minutes into the second half as they converted on a set piece to punch a loose ball inside the six-yard box past keeper Alex Eldridge and take a 1-0 lead.

In past years that often provided the straw that would break the Titans’ back but this squad refused to fold. While some slight panic ensued with their style of play, they remained focused mentality and grinded through the next 15 minutes.

“We seemed pretty composed but started booting the ball some,” says Myers. “We kept looking wide though.”

The Titans had their chances and players came off of the bench to provide quality minutes to keep Crested Butte in the hunt. Salida’s defense covered their bases when the Titans entered the attacking third and were able to turn away most opportunities until the final minute when a run up the flank offered a chance on net, but Salida’s keeper made the save to seal their 1-0 win.

“More positives to take out of it than negatives,” says Myers. “We had some chances and stayed composed and, so far, had one of our best games of the season.”

The Titans will hit the road at the end of the week as they head to Delta on Thursday for another tough match against a quality 3A program. They will follow that with an overnighter to the Cortez area and then will host Ridgway at Rainbow field on Tuesday, September 17 at 4 p.m.