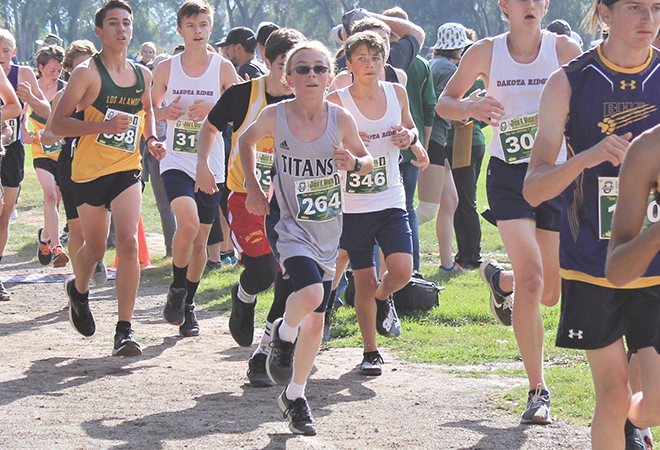 The Crested Butte Titans cross-country team headed into unfamiliar territory last weekend but it seemed to work out for them as a handful of Titan runners set new personal best times for the five-kilometer distance and look to build on that at a meet in Gunnison this weekend.

The coaching staff mixed things up this year by opting out of their usual trip to Delta to take the team to Alamosa, and what they found was an incredible experience.

“It did not disappoint, it was awesome,” says coach Shari Sullivan-Marshall. “It was the largest cross-country meet we’ve ever experienced in Colorado, including the state meet.”

The race was in conjunction with an Adams State collegiate race drawing numerous collegiate programs. In addition, the high school race brought in programs from throughout Colorado and even out of state.

“There were schools from everywhere,” says Sullivan-Marshall.

The boys’ race had more than 400 runners in it and the girls’ race had close to 300 athletes, resulting in a flesh mass of humanity out on the course. While the Crested Butte team was one of, if not the, smallest program there with just six runners, the Titan runners made the most of the situation.

“They all ran really well,” says Sullivan-Marshall. “We had three personal best times on the day.”

Porter Washburn reached a huge benchmark for developing cross-country athletes as he used the crowd and the fast course to set a new personal best time, breaking the 20-minute barrier.

“That’s big,” says Sullivan-Marshall. “Once they break 20 minutes they run under 20 minutes from then on, typically.”

Jude Eaton had quite the day as well. Eaton was the fourth runner out of the Titans just a week ago but he rose to the challenge in Alamosa to be the second Titan across the line.

Yvon Michel is still fighting through a lingering illness but shaved 10 minutes off his time the previous week and Cormac Billick got a little swallowed up by the massive field but still found his rhythm to cross the finish line within a minute of his previous personal best.

“All of them got faster in the last mile and that’s what you want to see,” says Sullivan-Marshall. “Mile two always seems like a grind but they were able to pick up the pace in the third mile as they just focused on picking off people.”

Sam Merck and Stella Reinhardt got a little nervy with the massive crowd of runners but managed to shake it off throughout the race and put in some quality efforts on the day.

“They got a little lost in the crowd and pulled into the frantic start but both ran really strong,” says Sullivan-Marshall.

This weekend will be the only time to catch the Titans cross-country team in action close by as they toe the line in Gunnison on Saturday, September 14. The racecourse is behind the Gunnison middle school with the boys starting at 11:15 a.m. and the girls at 1:45 p.m.

“We should have our full squad running and we tend to run really well in Gunnison,” says Sullivan-Marshall. “I’m psyched we’re going from a race in Alamosa to a race in Gunnison. That’s two of the faster courses this season in a row.”