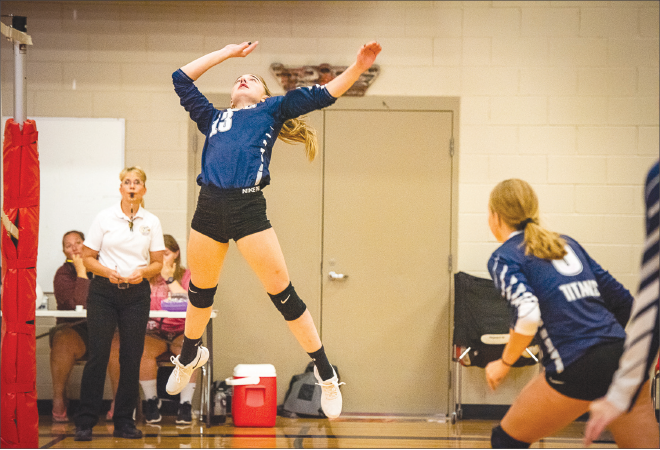 Injuries over the course of two days had the Crested Butte Titans volleyball team scrambling with line-ups and calling on younger players to step up into varsity roles and veteran players stepping into new positions. The chaos resulted in five losses but the team did battle in every game of each match, rising to the challenge as best they could.

“The girls had to step up and I was impressed,” says coach Erin Goggins.

They opened the weekend on the road to face Custer County on Friday, September 6 with numbers already somewhat depleted. After battling to a tough 29-27 loss in the first game of the match, the Titans were hit with their first major injury when a key middle had to step out and the team found it tough to recover, eventually losing the next two games and the match.

“The girls were scrambled,” says Goggins. “It was hard to come back from losing that tight game and then losing one of our top players.”

Crested Butte returned home that evening and woke up early the next day on Saturday to head to Gunnison for a tournament. They started it off against Dove Creek, dropping the first two games to lose the match. They rebooted for their second match of the day against Mancos as injuries continued to pile up and Goggins continued to call on her players to work outside of their comfort zone.

“We were pulling together last-minute line-ups,” says Goggins.

The team did find some success in their next match as they returned to the floor early that afternoon to face Olathe. After losing the first game, the Titans rebounded to win the second game 25-20 but fell in the third to lose the match.

“The scores weren’t a reflection of how we were playing—we played really well,” says Goggins.

By the fourth match of the day, the Titans were missing three key starters to injury as they closed out the tournament with a match against Norwood. After losing the first game they won the second one to force a third and deciding game. They battled back and forth all game but ultimately fell 17-15.

Audrey Griffin set the entire day and had 35 assists and 40 serves in play, while Sylvie Newman stepped into a new position for the day after other players’ injuries, playing middle to tally nine kills. Sydney Stoneberg led the team with 11 kills and Marlowe Desmarais added in 10 kills. Madison Pankey had multiple digs as the libero for the day while Georgia Lange and Stoneberg tied for most aces at four for the day.

“We had some close games but just couldn’t finish for the win,” says Goggins. “We were playing well, we just needed to finish. At the end of the day I was really proud with how they rallied.”

Goggins now awaits the official injury update as players seek medical attention. Some may be able to return sooner rather than later, while others may be missing a significant time. As a result, Goggins and her team will continue shuffling as they face South Park, Center and Del Norte this week.

“This week is triage week—there’s a lot of stuff that is out of our control,” says Goggins. “Right now it’s all about finding consistency amid a lot of injuries. They have a good mentality about it and some girls have really stepped up when needed by their team.”