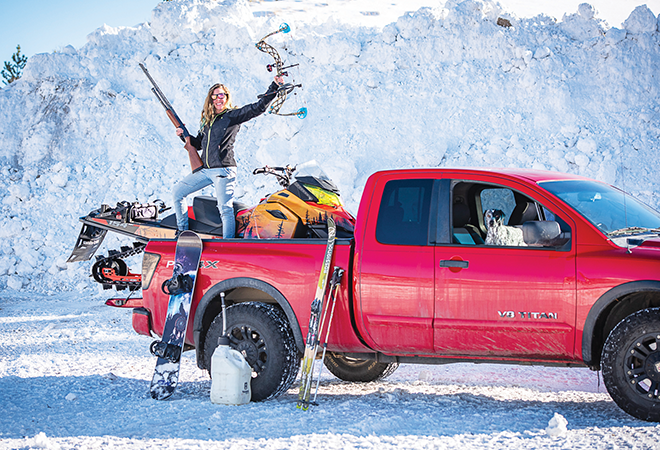 Andrea Rybarz proudly claims that she grew up in a trailer next to the dunes—the Silver Lake Sand Dunes in the small western Michigan town of Hart. “Mom and Dad are not rednecks,” she grins, “but I probably am. I’ve never owned a truck that didn’t have a lift on it.” Many a day was spent driving on the dunes with her big truck.

Her family has owned and operated Heart Pizza in their little town since 1981. Her mom is basically running the restaurant while her father is getting ready to retire as a computer programmer.

Andrea’s dad was an avid outdoorsman and she grew up cross country skiing and riding snowmobiles, as she recalls, “We get a lot of snow there with the lake effect, more than other areas in the state.” When summer finally arrived, her father would take her fishing and hunting. “My dad got me my first bow when I was eight years old. I’ve been rabbit and deer hunting my whole life on our 40 acres. I try to go hunting with my dad every year.”

She’s still quite the archery huntress, and this year, Andrea was awarded a big horn sheep tag here. “It took me 14 years to get the permit. I went solo. I had friends helping me about four days out of three-and-a-half weeks.” As a conservationist, Andrea feels that all the herds in Colorado need to be managed far better. “The Department of Wildlife [DOW] gave out four big horn licenses but there were only eight rams in a herd of maybe 30. I feel that all of the herds in Colorado are being ill managed and they’re overselling tags because it’s an opportunity state. They want you to come here and hunt but when you don’t put restrictions on it, the herds don’t have a chance to grow. Young animals are being killed prematurely.”

She did not get her sheep. Instead, Andrea became the prey. Having set up a game camera, Andrea quickly realized there weren’t sheep in her unit near Mt. Ouray because there was an enormous mountain lion living in the area.

“I was up there alone at 13,000 feet, without my handgun, and about to hike back to my truck down through a mile and a half of scree and another mile and a half of trail when I heard something in the rocks next to me,” Andrea says.

When she turned, a big cat was coming towards her from 20 feet away. “It stopped. I took three steps back and it came towards me again. It was coming in hot. It was so close I could see every whisker. I knew that I had to be ready to shoot. It seemed that it was not going to let me go, so I took a shot.”

Her arrow missed the cat by one inch. It jumped back but turned and came right back at her. She had only two arrows left. She grabbed her knife. “I got as big and loud and scary as I could be. The cat was behind a low cedar tree and I started breaking the branches off of a downed dead tree, picked it up and started dragging it down the mountain, being as loud as I could. The tree was breaking and popping and making all kinds of noises. I thought, just don’t fall.”

The cat disappeared, but Andrea looked over her shoulder the entire three miles back to her vehicle. “I got back to the truck and figured I should take a few days off hunting. And then I thought, nah, I’ll drive to the other end of the unit. The next morning, I found all the sheep two mountain ranges over. These are native sheep. The Almont sheep are transplant sheep. They’re bred differently. All those sheep you see in Almont were put there by the DOW.”

As for the big cat, she warns, “There are mountain lions living all around our valley now. People need to be aware.”

Back when Andrea was in high school, she was a hard worker from the age of 12 when she began in the family pizza shop. But she confesses, “There were a few years there that I was probably more concerned with partying and socializing.”

However, she graduated in the top tenth in her class of 1999 and by college, claims to have gotten all the partying out of her system. She attended the Illinois Institute of Art in Chicago, earning a BA in fashion design in just three years because she wanted to get out of the area as fast as possible. “I hated Chicago. I hated the big city and the crime. I was poor, and living in Chicago as a poor person is not fun. I had some scholarships but I paid for college myself.”

After college she moved home to run the family business and started her own fashion line, designing and creating clothing for boutiques. In January 2007, she decided to move to Boulder to be closer to her sister. “I lasted there one month and then decided that Boulder was not my people.” She moved to Denver, primarily for work. “I had a whole bunch of crazy jobs. I was bartending and doing visual displays at the Cherry Creek Macy’s, which was three floors of horrible holiday mayhem. I did that for a year before realizing I was only getting paid $10 an hour to carry 50-pound mannequins around and listen to holiday music, essentially a nightmare horror movie.” At the same time, she was also learning to make fur coats for a furrier.

At one point, she was working at Moe’s BBQ and Bowling Alley in Denver. She had worked in bowling alleys and bowled in a league since she was a child. “I was a bartender-bowling technician,” she says, a job title one does not hear often. “I’d be making a cocktail one minute and cracking on machines in the back the next. I met John Bukaty [a former Crested Butte artist] and a couple other guys who lived or had lived in Crested Butte.”

Bukaty was moving to New Orleans and suggested that Andrea should move into his place in Crested Butte South. She essentially moved to Crested Butte site-unseen during the winter of 2009. “I moved here mostly to go hunting and fishing. I wanted to be in the outdoors.” She landed a job at Crested Butte Mountain Resort working in Adventure Services, selling services such as snowshoe outings, snowmobile tours, hot air balloon rides and dog sledding. “But I realized that bartending will always be better money,” she says of tending bar at Kochevar’s and the Brown Lab, and points out that this year marks her 20th year of bartending, although she only works happy hours now and not late shifts.

“I have had a ton of fun bartending in my life but recently the late nights have been really difficult. People are depressed, suicidal and it’s just not fun. I don’t know if it’s a generational thing or what. You see the struggles that the community faces. Why are people always crying at the bar? They’re depressed, they’re emotionally unstable and you’re there serving them alcohol,” she says and feels that bartenders are not qualified to deal with emotionally unstable people.

“During the holidays there are a lot of people without their families here and you feel a bit of pressure to make everybody feel wanted. I want to make sure everybody is having fun. I take a lot of pride in that but sometimes there’s nothing you can do. I’m an extremely strict server. I have no problem cutting people off and asking them to leave. It’s a lot of pressure being a bartender. It’s emotionally and physically draining. You’re everyone’s psychiatrist. The struggle is real some days. For anyone who thinks bartending is an easy job, it’s not. You’ve got to be tough.”

Andrea still sews and does alterations. “I don’t advertise because I can’t keep up. I’m doing it at least 15 hours a week while also tending bar at Kochevar’s and the Brown Lab on the mountain. “I’m not in love with sewing but I’m really good at it,” she smiles. “I made the Flauschink crowns and scepters twice and made the new capes.” Andrea made the red velvet curtains gracing Kochevar’s windows as well. “I’ve tried to stay involved in the community as much as I can,” she says.

The huntress is also choreographing a couple of dances in Move the Butte for this February’s performances. “‘I’m really excited about this. I’ve been dancing my whole life. I’ve had dancing lessons and gymnastics from my childhood and taught jazz dance classes after high school.” This is her fifth year with Move the Butte and for the 2020 show she’s created an all-male dance with a dozen guys working it. “It’s gonna be so awesome. I like to push the envelope and make people feel a little uncomfortable. I’m always doing something borderline inappropriate in dance,” she laughs.

“Just like everybody else, I’ve thought about leaving Crested Butte a million times but I have figured it out here and my quality of life is good. I do something outside every single day, I get to be in nature every day, “ says the multi-faceted bartendress-huntress.”I’m just trying to live life to the fullest.”