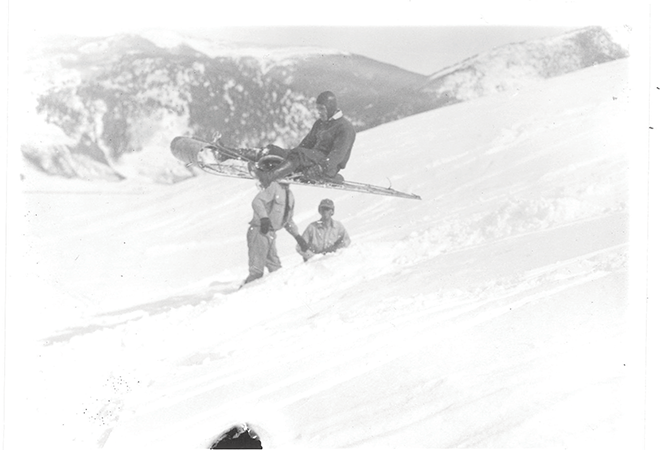 A couple of decades before ski areas with lifts existed in the Gunnison Country, Quick’s Hill was the place for winter sports. On the west side of Highway 135 and almost directly across from Cement Creek, seven miles south of Crested Butte, the hill was part of a ranch owned by Joel and Nila Quick, who bought it in 1912. The hill had a southeast exposure and a 400-foot vertical rise.

In the 1920s and 1930s the Western State Hiking and Outing Club, led by Western State College faculty members Clarence “Rocky” Rockwell and Abe Capron along with other locals, skied there on weekends and holidays. Twenty to 25 club members rode a WSC bus to Quick’s Hill, usually followed by four or five cars carrying locals. The skiers parked vehicles on the side of the highway and then walked up the hill. Some of the group skied and others tobogganed down the hill. Jumps were built out of snow and skiers and tobogganers sailed 30 or 40 feet down the hill, often 10 feet in the air. The WSC students also played “Crack the Whip” on skis, a rather exciting and tricky exercise.

All of the skiers either went straight down the hill or used the Telemark Turn because at that time the heel came up on the primitive bindings used. Bruce Palmer, a WSC grad of the late 1920s and one of the finest skiers in the Rockies, taught everyone the Telemark Turn. Some of the best skiers on Quick’s Hill included Bruce Palmer, Wes McDermont, Chuck Sweitzer and Karl and Veryl Easterly. At lunchtime the top skiers would walk an hour and a half or so on the flank of Red Mountain using “seal skin climbers” and then ski six to eight inches of powder down to the bottom.

Mr. and Mrs. Quick loved having young people ski and toboggan on their hill and always had hot chocolate, coffee and cinnamon rolls for the young people. During summertime, a number of the WSC club members would work for the Quicks on the ranch. In 1932 the Quicks sold the ranch to Joe Echer for $2,300 but continued to live on the ranch and lease it.

One of the great skiers in Gunnison Country history, if not the greatest, was Karl Easterly. Born on a ranch on Ohio Creek in December 1919, Easterly was only eight years old when he and brother Veryl began riding the WSC bus to ski on Quicks Hill. He and his instructor Bruce Palmer became the best skiers on the hill. In 1935 at the age of 15 and only a Gunnison High School ninth grader, Karl built a small jump with an incline on a steep section of Quick’s Hill and began doing backflips off the jump. It was an amazing feat, considering the primitive boots plus skis with no heel attachment. Karl Easterly would go on to national fame, appearing in TV shows and the movies. But that will be a later story.

Quick’s Hill retired as a ski area after the winter of 1939/40 when the Pioneer Ski area opened three miles up Cement Creek with the first chairlift in Colorado. Quick’s Hill passed into history as a ski area but in the fading light of yesteryear we can almost see tobogganers and skiers coming down the hill, Karl Easterly in the air and Mr. and Mrs. Quick at the bottom of the hill with hot chocolate, coffee and cinnamon rolls—great memories of the past.