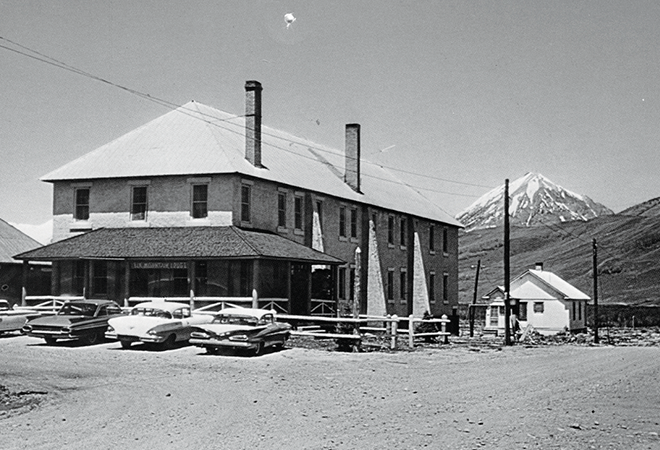 Crested Butte in the early 20th century bore only faint resemblance to the town we know today. Back then coal mining was the dominant industry for a population made up primarily of Croatian, Italian and Slavic immigrants. Indeed, the Colorado Fuel and Iron Company’s aptly named Big Mine, which opened in 1902, was the third largest coal extraction site in the state, with roughly 400 miners producing 1,000 tons of coal per day. It wasn’t until 1961 that the ski area opened. The local mountain biking scene didn’t take off until the early ’80s.

But there is one constant between then and now. Erected by the CF&I Company in 1919, and still standing steadfast at the corner of Second Street and Gothic Avenue, the Elk Mountain Lodge is celebrating its 100th anniversary this year. Among the best and most historic Crested Butte hotels of today, the building was constructed of locally pressed cinderblocks made of cinders from the mine slag piles, and initially served as boarding house for up to 65 miners.

Then like now, the lodge was a warm and welcoming place, its occupants often gathering for friendly banter on the front porch’s bench seats after enjoying their evening meal, which was typically served family-style in oversized ceramic bowls.

In those early years, the Elk Mountain Lodge also served as Crested Butte’s communications hub, as it was home to the only public telephone at that end of town. Anyone in the building’s vicinity who needed to make a call placed it from there, and incoming calls were routed to the lodge.

As mining operations began to wane in the early 1950s (Big Mine closed in 1952), CF&I began to liquidate its Crested Butte assets, including the Elk Mountain Lodge, which was sold to a local businessman, who converted it to a hotel. And so it went for the ensuing half century, the historic lodge passing from one owner to the next, undergoing various changes along the way.

In the mid-’70s, Donita’s Cantina occupied the front of the building (which is how the liquor license was acquired). Hotel guests would enter through the rear entrance. After the Mexican restaurant moved to its location on Elk Avenue, a Chinese eatery moved into the lodge. But that arrangement was short-lived and soon the hotel took over the entire building. More change arrived in the early 1980s, when a third floor was added, private bathrooms were installed in all guest rooms, and a sunroom was constructed.

The Elk Mountain Lodge’s latest chapter began in the late 1990s with the arrival of Mike Nolan, who started out working the front desk, then moved up to manager, and finally bought the business outright in December 2000. All told, Mike lived in the lodge for seven years before moving across town with his wife, Amy, to start a family. Today, they have three children, sons Eli and Ty and daughter Finley.

In the following years, the lodge has flourished under the Nolans’ caring stewardship, as they’ve managed to walk the delicate line between preserving the building’s historic charm while also upgrading it to a modern Crested Butte lodging experience. Recent improvements include installation of a new roof with more efficient insulation, and refurbishment of the original Douglas fir lobby floor, which had been covered in carpet the previous 60 years. They also upgraded to luxury beds and bedding, and installed modern TVs and bathroom fixtures in all of the lodge’s 19 individually decorated rooms, including those on the third floor, which feature balconies with spectacular views of town and the surrounding mountains. It’s also worth noting that, unlike many hotels, you can actually open the Elk Mountain Lodge windows, allowing the fresh mountain air to flow in.

When it’s time to venture into town—or go skiing, hiking, fly fishing or mountain biking—the Elk Mountain Lodge’s location can’t be beat. It’s an easy two-block stroll to Crested Butte’s main shopping and eating district on Elk Avenue, which is also where you catch the free shuttle bus to the ski area. Two additional blocks put you at the Crested Butte Nordic Center, which rents gear and maintains more than 30 miles of cross-country ski and snowshoe trails. Walk or ride a few blocks the other direction and you can hook into the Lower Loop trail, which winds its way out the Slate River drainage and has some of the valley’s best views. Indeed, most guests who fly in for their Crested Butte vacation don’t bother renting a car because everything is so close and convenient.

The end result is best described as high-end European-style lodging. Elk Mountain Lodge guests rest and rejuvenate in their cozy and comfortable rooms, but spend the best part of their days either exploring outdoors or soaking in the lodge’s large indoor hot tub, eating fresh home-cooked meals or chatting with friends old and new in the lobby lounge, which has a piano, library, board games and a full bar that’s open until 9 p.m. daily.

It all adds up to the perfect Crested Butte lodging experience for adventurous individuals, couples, families or small hiking, biking or ski groups who want to spend quality time together just like those hard-working miners did on the Elk Mountain Lodge’s front porch a century ago.