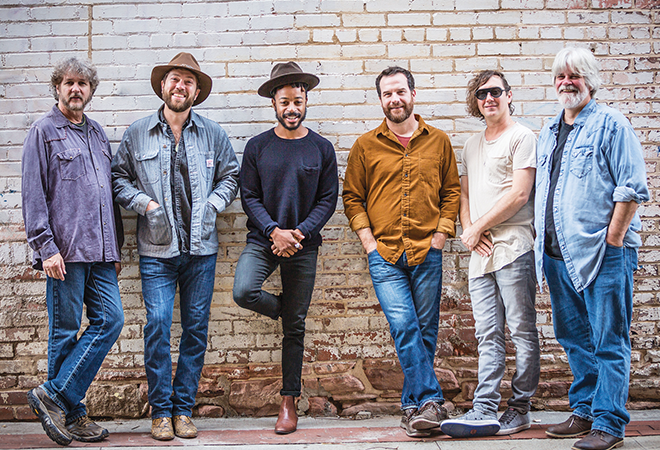 The old adage is that you can’t trust anyone over 30, but as Leftover Salmon turns three decades old this New Year’s, you can trust that their music continues to evolve into an exciting show that never gets old.

Although they were born of the Boulder area, Crested Butte is where the combined band members of Salmon Heads and Left Hand String Band merged at the Eldo one auspicious, if not debaucherous, New Year’s Eve.

Legend has it that the band formed in 1989 when members of Vince Herman’s Salmon Heads joined forces with Drew Emmitt’s Left Hand String Band to play that show at the Eldo because a couple of the members of the Salmon Heads couldn’t make the drive from Boulder, so they recruited members of the Left Hand String Band for the gig. That original lineup included, in addition to Emmitt and Herman, Glenn Keefe on bass, Jerry Cacavagnaro on accordion and harp and David Dorian on drums. Shortly afterwards, Mark Vann was added as the original banjo picker. Their current line-up is founding members Drew Emmitt (mandolin) and Vince Herman (guitar), with Andy Thorn (banjo), Greg Garrison (bass), Alwyn Robinson (drums) and Erik Deutsch (keyboards).

Local man in the Crested Butte hood, Drew Emmitt recalls that when the band first started there weren’t many doing this genre of what’s now called jamgrass. “The genre didn’t even have a name really,” he says from his tour bus heading from a show in Atlanta to another in Knoxville. “The Grateful Dead were ending and this new thing was starting with these jam bands and now there are hundreds in the genre. There weren’t a lot of bands getting out on the road, so we were part of those bands who were doing that.”

Their music has been described as a combination of bluegrass, rock, country and Cajun/Zydeco. It’s been said that in their early stages, their unique blend of music was the genesis of the term, “jamgrass.”

After that initial show at the Eldo, the band was in Crested Butte so often that people thought they were part of the neighborhood and Emmitt confirms that. “Crested Butte was a big part of our formative years and we played there so much that people thought we lived there. So I figured I should just move here,” he said. Which he did in 2000. After 30 years, Emmitt says that the band had no idea they’d still be going strong three decades later. “We had no idea what we were doing. We were just having fun and wanted a band we could play ski towns with,” he laughs. And of course, living in Crested Butte, he still skis.

Since its inception, the band has been known for breaking the boundaries of bluegrass by combining traditional sounds with non-traditional instrumentation. They’ve recently released their latest album, Something Higher (2018), as well as a new book written for them—Leftover Salmon: Thirty Years of Festival! by Tim Newby and published in 2019. Leftover has played to audiences across the world and on large stages, also performing at Red Rocks more than a dozen times with sold-out shows.

Both Emmitt and Herman have spawned offspring who are following in the musical footsteps of their fathers. Herman’s two sons—Silas, who plays mandolin, and Colin, who plays bass—have both played on stage together but are mostly exceptionally talented freelance musicians. Eli Emmitt and his sister, Willa, have grown up in Crested Butte and have been jamming together since they were young children. They’ve played various local venues in Crested Butte and elsewhere and sometimes sit in with their father on larger stages. Both kids can hold their own with the big names as musicians and songwriters. Eli currently attends Ft. Lewis College in Durango, where he’s a guitarist in a jazz band and a local funk R&B band, and in the chamber choir for the college. As a songwriter whose depth of writing is well beyond her young years, Willa, whose unique vocal styling sets her apart from countless current female singers, was recently in Nashville to record her music with band members of Lucius and recently attended the Cancun Strings and Soul Festival with her dad, as Leftover Salmon plays there annually.

“It’s significant that we’re playing in Crested Butte for our 30th,” Emmitt says of the celebratory milestone anniversary. “We’re really excited to be playing the new Crested Butte Center for the Arts and for the hometown crowd where it all started for us. It’s going to be quite a night.”