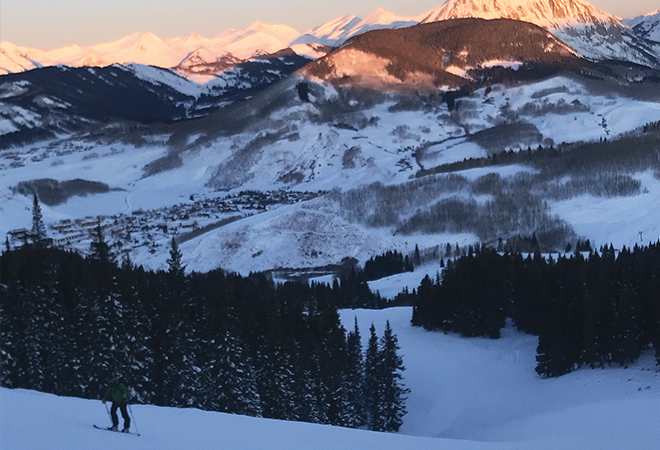 “A society grows great when old men plant trees whose shade they know they shall never sit in.”

After 12 years of Catholic school I am all too familiar with the “Forgive me father for I have sinned…” mantra. And so I must again confess that I cannot be considered a climate change mitigator. Frankly, it is hard for anyone living here to fall into that category. There’s a lot of climate sinning at 9,000 feet in a winter resort economy.

The science seems pretty clear that humans are contributing to the impacts of climate change on this planet through carbon dioxide emissions. Taking action to stem the flow of CO2 is needed and moving away from fossil fuels to renewable energy is a key element, so kudos for all the efforts throughout the valley to move toward more solar and less gas and coal. But I also believe one has to be honest about one’s situation, and to live here where almost everything from the Italian granite for the kitchen counter to a January apple from South America is shipped in and where lots of heat is probably needed in most homes, goes against pretty much all climate mitigation standards.

While talking about the problem with other believers is fine, I would encourage local time, effort and money go to not only feeling good about cutting emissions by riding the bus but doing something else simple and super effective like planting trees. We’ll get to that in a second but first: Reality.

Forgive me father for I have flown (most recently to Europe and back). I’m pretty sure I’m not the only one taking a plane in and out of here this winter and planes are near the top of the list for climate sinning. So catching the new wave of “flight shaming” would be more than somewhat hypocritical.

While taking steps to mitigate our climate impacts, let’s not fool our pious selves. We live in a community that while declaring a “climate emergency” closes a blind eye to one of the biggest sins of climate change: air travel. We in fact have chosen an economy that relies in large part on attracting airlines to the point where we tax ourselves to subsidize air flights into our valley. Some of that same tax goes to the public bus system in the valley, so that offsets some of the guilt but not the CO2.

Google air travel and climate change and see what comes up:

“Although aviation is a relatively small industry, it has a disproportionately large impact on the climate system.”

“Around the world, aviation emits about 860 million metric tons of carbon dioxide every year…”

“The United Nations aviation body forecasts that airplane emissions of carbon dioxide, a major greenhouse gas, will reach just over 900 million metric tons in 2018, and then triple by 2050.”

“A one-way flight across the Atlantic from New York City to London emits one ton of carbon dioxide per passenger. There are upward of 2,500 flights over the North Atlantic every day.”

“Compared to other modes of transport, such as driving or taking the train, travelling by air has a greater climate impact per passenger kilometer.”

Forgive me father. Individual action is noble so if you choose to no longer take a jet somewhere, good for you. I personally feel the doors that open through that travel portal are valuable and I am skeptical that my not flying will solve the climate crisis. But communal investment in massive change is likely to help find solutions that might save the human occupied planet. Government investment in renewable energy instead of fossil fuels matters. Using large solar arrays for power instead of more gas lines will make a difference. Spending big money available through government funding on research is smart. It will take a lot of time and money to develop carbon-neutral synthetic hydrocarbons to fuel airplanes and cars and that takes a communal investment through the government. That scale of investment makes more sense than shutting off the benefits of travel.

A most compelling climate action plan right now is—planting trees. Research indicates that of the 39 billion tons of CO2 that humans emit into the atmosphere each year, 28 percent is removed on land, mostly by forests. So plant more trees.

The Amazon is the world’s largest remaining tropical forest and stores up to 140 billion tons of carbon. Releasing this through continued deforestation would significantly accelerate climate change. So stop cutting down trees and plant more trees.

Scientists agree that planting billions of trees across the globe is a cheap and effective way of sucking CO2 out of the atmosphere. According to The Guardian newspaper, “As trees grow, they absorb and store the carbon dioxide emissions that are driving global heating. New research estimates that a worldwide planting program could (eventually) remove two-thirds of all the emissions from human activities that remain in the atmosphere today, a figure the scientists describe as ‘mind-blowing.’” So plant more trees.

It is still important to reverse the current trends of greenhouse gas emissions, especially since such massive forest restoration would take 40 to 80 years to have the full effect of removing 200 billion tons of carbon. That’s where more solar and more public transit comes in. But I like doing things more than not doing things. The idea of planting a tree is better than not flying. Diane and I flew to Austria this month and we also contributed to the Nature Conservancy program to plant a billion trees.

Crested Butte’s Climate Action Plan touches on several topics. Carbon sequestration is near the bottom of the list as opposed to prohibiting single-occupancy vehicle use or buying a $10 million anaerobic digester for commercial scale composting that is near the top of the list. That is upside down.

Forgive me father—but we are probably not going to stop the climate sinning up here. So we should plant more trees.