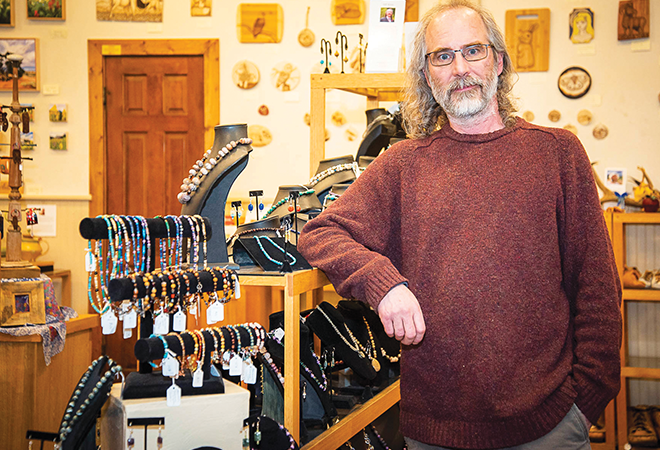 Jeff Dautrich presides over the opals and lapis, the labradorite and the turquoise, a structured amalgamate of stones, texture, color and iridescence that is embraced by the fine silver and beads of his jewelry creations at the Paragon Art Gallery. A longtime member of Crested Butte’s only artist co-op since 1991, he tells of a love of rocks from the time he was old enough to dig them up, just a tad past toddler. Inspired by his grandfather, a consummate rock hound and jewelry lapidarist, Jeff was introduced to the wonder of geology and gemology on the coastal range of Oregon where he was raised under the ever-present gaze of Mt. Hood.

“Grandpa always had a rock collection and I was fascinated by it. Between that and grandpa being a storyteller about where and how he found them, he piqued my curiosity. So, I’ve been digging up and collecting rocks since I was three,” he smiles. Jeff tells an emotional story of driving out to see his grandfather, Matthew Klein. “I got to spend his last day on earth with him. I told him that I had decided to go into jewelry and he was so thrilled to hear that.” His grandfather passed sometime that night. Jeff was grateful for having spent that wonderful day with him, and as a tribute, says, “I changed my jewelry business name to Jeff Klein Creations.”

Growing up in Brightwood, Oregon, and later in the town of Zigzag, Jeff laughs remembering his childhood escapades. “As a child I ran amok. We lived in the woods. I was surrounded by campgrounds in the mountains at the base of Mt. Hood. I grew up a ski bum with a season pass at Mt. Hood Meadows.” Jeff would, of course, skip school to go skiing but even with being absent for a good chunk of his classes he still made honor roll. In fact, he was in the top 5 percent of his graduating class.

At 14, he already had a part-time job and by 15 a full-time job, allowing him to earn enough so that the following summer before his senior year, he took off to explore Alaska for an entire month by himself. Mostly, he wanted to check out the University of Alaska at Fairbanks (UAF) and he fell in love with the area. After high school graduation in 1981, he enrolled at UAF to take geophysics and earth science. Although his high school studies were a breeze for him, college was an awakening. He says, “I took 18 hours of all 200 level classes in my freshman year. It spanked me. I lasted a year and a half.” Plus, he discovered that all the geology classes were oriented to the oil industry, which was not what he was interested in.

Jeff became a restaurant manager in Fairbanks. It was 1982 and he recalls, “It was a wild place back then. Fairbanks was the tail end of the pipeline. It was the Wild West with a lot a young people who had a great deal of money because they were working on the pipeline. You could make $35k in two months on the pipeline but I wasn’t a roughneck. I was much better as a waiter and a chef and managing the Food Factory,” the restaurant he worked at.

His skiing revolved around the resorts of Cleary Summit and Ski Land, both outside of Fairbanks and both had only rope tows and T-bars. When the temps hit 45 below for 45 consecutive days, Jeff decided to head to the warmer climes of San Diego for several months. After visiting his friend Brian Wilson in Crested Butte in May 1985, Jeff says, “There wasn’t the remotest doubt in my brain that this was going to be home.”

He had met Joanna, his then wife-to-be, in Fairbanks in 1987 and the two moved to Crested Butte in 1989. They had their daughter, Alyssa, in 1990. Brandon, who Jeff raised as his own son, had been born in 1984 to Joanna and Michael Wedgwood. Arriving in Crested Butte, Jeff worked at various restaurants, mostly waiting tables at the Artichoke on the mountain (now the Avalanche). “I was in survival mode, raising kids, working again at various restaurants that culminated as manager at Giovanni’s for several years before moving into the Princess Wine Bar as manager and night bartender,” he says.

However, he didn’t feel challenged by his work and he was bored. He needed a change and he wanted to see his family more, which meant switching to a day job. Jeff began training to be an appliance repairman. “I was building walk-in coolers for commercial refrigeration in addition to appliance repair but I came to my senses pretty quickly,” he says. Four years into his new endeavor he was getting about 50 calls a day for jobs, “And that’s when I stopped doing commercial appliance repairs and project installations. It beat my body up. I specialized my business to just doing domestic appliance repairs in order to give better service.” Twenty-three years later, his business, East River Appliance, is still going strong.

In 2008, after their kids were grown, he and Joanna went their separate ways. Throughout this entire time Jeff was a jeweler, creating works of art. Back when he was in Fairbanks, he was working exclusively in natural gold nugget jewelry. He had mining claims and was prospecting in the Fairbanks mining district, at one point co-owning 320 acres, eight claims that were part of a 4,000-acre claim block. “I was the guy with the four-wheel-drive pick-up, a chain saw and the interest in geology so I was the one surveying our mining claims,” he says.

He identified three specific spots for potential, and the first dig produced a vein of antimony, an ore, and this one carried 20 ounces of gold per ton. “The vein was three feet wide by 100 feet wide and to an unknown depth,” he recalls excitedly. The two partners were on the verge of leasing the claims to a large corporation when life dictated that Jeff move to Crested Butte. He quit claimed his share of the claims to his partner and received royalties for the next 25 years. “It was a fun experience. We’d go out and camp, survey and hunt for dinner. All this was only 40 miles from Fairbanks so we could drive to our claims. The largest gold nugget in the world at that time was found two miles down from our claims.”

Although the love of rocks was imparted by his grandfather, Jeff learned his jewelry trade in Fairbanks from his mining partner, later honing his skills in Crested Butte at Zachariah Zipp. He’s a self-taught gemologist through avid reading. He started to work on his silversmithing skills when he arrived in Crested Butte, since previously he had been working primarily in gold. His creations displayed at the Paragon showcases his wire-work design and gems. Jeff also ran the popular Labor Day Peoples Fair, produced by Paragon, for 20 years.

Gardening at his home in Crested Butte South has also been a passion for Jeff for the past decade, canning his own food from his garden and learning fermentation. “I got into fermentation because my daughter and I like kombucha and that opened the door to everything else.” He now makes kimchi, sauerkraut, pickles and he proudly states, “I’m a bona fide garlic farmer, growing 590 heads of garlic last year. It’s my personal mission to figure out what you can grow in the upper Gunnison Valley and it turns out you can grow a lot more than I thought.

“Other than all that, I’ve been living and surviving in the Butte. You ski every weekend in the winter and hike every weekend in the summer. It’s a no-brainer for me,” he says of living in paradise. “I couldn’t conceive of living anywhere else. I love this place. I’m not a people person, I’m a woods/mountain person and I’m at my happiest when I’m at the top of a mountain.”

Share
Previous Benchtalk: January 10, 2020
Next Maybe we’re all in a movie.