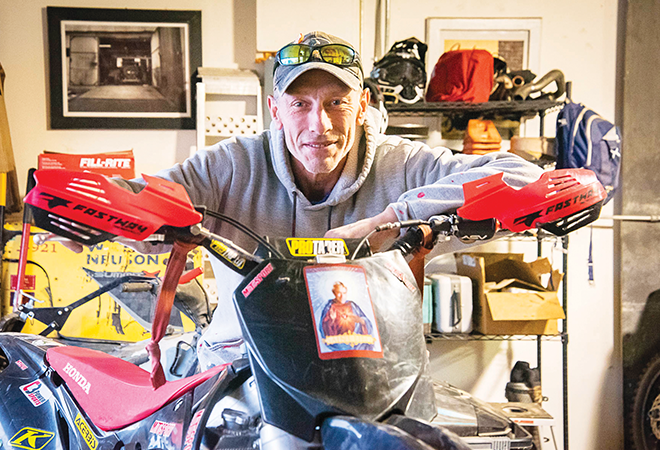 A Northwoods man in the West Elk mountains

John Polzin’s Facebook pages are filled with photos of high elevation snowmobile escapades, grinning in chest-deep backcountry snow. One shows him hunting wild fowl with smiling dogs; there is the sanctity of his fly fishing and the reverence at the edge of a river, long views of misted mountains and fields of wildflowers, charts of backyard medicinal herbal remedies and his recognizably broad smile on a dusty face in dirt-bike gear. One definitely gets the overall picture of John’s life and it’s all about loving a life in the outdoors.

He was born and raised in the Northwoods, in Oconomowoc, Wisc. The town’s name in the Menomonie Native American tongue means “falling waters.” Oconomowoc is a small city surrounded by five lakes and because of that geologic fortuity, John recalls growing up, “My life was water. We were always at my uncle’s farm, where we had a river we could fish at and catch frogs, and woods where we could hunt small animals for food.”

John’s father was a rural letter carrier for the U.S. Postal Service. His mom worked for the Milwaukee Journal as a proofreader and office assistant, and she was also an artist, hired to hand-color photography portraits. He tells a story of his grandparents’ and parents’ generations coming through the Great Depression as hunters and gatherers, homestead farmers with a huge garden. The family canned and pickled and made their own wine and root beer, and the latter John would sneak a bottle or two from the cellar.

“I bought my own shotgun when I was 12, a 20-gauge pump Winchester, and afterwards, I’d go down to the farm and hunt pheasant,” he says. It was the best life, a close family of German descents living wholesomely off the land with all the woods and lakes for an adventurous kid to explore.

John was a month old when his parents brought him to the small cabin that his dad built on three acres on the shores of Two Sisters Lake in McNaughton, in far northern Wisconsin. He and his sister, cousins and friends would all sleep outside in pup tents, with a fire pit raging outside and lots of roasted marshmallows. He fondly remembers spending entire summers at the lake. “We’d sneak out at night and do flashlight woods exploring,” he recalls.

Back home in town, John was appreciative of his father’s schedule and companionship. “It was really cool that Dad would always be home when I got home from school because he worked from 5 a.m. to 2 p.m., then we’d go fishing or hunting.”

He tells a story of when he was 8 years old, in the car riding down to the local bar with his dad and grandfather. Granddad was a card player, and a good one at that, John recalls. He was told to stay in the car while the adults went inside, but they instructed him to be attentive and if they were walking out the door, then everything was fine but if they came running out of the bar, he was to quickly start the car. “They came running out the door. Grandpa had lost and couldn’t pay his tab so they got kicked out of the bar.”

John went to a Catholic elementary school. “I had to go to church twice a week. Now I’m an agnostic,” he laughs. “And I question everything. There are three things you can’t trust—somebody’s driving, religion and politicians.”

He adds a fourth: “Never let anyone tie a fly on your fishing rod. I learned to fly fish at 14 and it’s my religion. When I’m on the water, it’s such a life-changing sport because of what you have to know. There’s so much that you need to understand. Casting is one thing, learning to tie knots is another, but you have to understand the entomology and what your river system supports as far as its insect life. There’s so much life underneath the water, and you have to know how to figure out the hatches and present the fly in its life cycle stage that the fish are feeding on at the time. It’s almost a science. It’s what grabs me. It’s not just the beautiful places you hike into, it’s also understanding and applying all that you’ve learned. That’s what I love about it. And every day it changes.”

In grade school, John played basketball and football. In high school he was third baseman. While in high school, he worked for his uncle in construction and he had a paper route. He graduated in 1982 with a baseball scholarship at the University of Wisconsin Milwaukee. “I ended up with a degree in finance although I wanted to go into history but I knew I couldn’t make a living off it,” he says, but he minored in history.

In college, John worked for three years for an aircraft parts manufacturing company, running shipping and receiving. In 1985, he figured it was a good time to explore and travel, and hung out in Los Angeles for a couple of months, where, he declares, “We were all Deadheads. I went up to Berkeley after that, later hitchhiking up to Tahoe. Up in Tahoe I ran into these people from London who were traveling around the world working odd jobs.” John joined them to find work at a ski resort in Vermont.

“We drove a drive-away car to Boston, a new BMW 525 with the plastic still on the seats. We partied in it for six days and when we got to Boston, we parked it and ran, hitched to Vermont and got jobs at Mt. Snow.” The resort had bought Big Bear in California and offered the new lifts operations position to John. He and his college roomie bought a hand-painted purple VW bus that they painted flames on and headed west.

“We were burning so much oil that a guy pulled up next to us on I-80 and stuck out a can of oil as he was going by us. He had so much oil on his windshield from driving behind us.” Notoriously wind-challenged, the VW couldn’t go faster than 40 miles per hour with those Kansas headwinds, so they left the interstate for the two-lane highway backroads. “We went to war with tumbleweeds in the middle of pitch-black nowhere going through farm land.” They never made it to California.

They detoured to Crested Butte to visit a couple of Milwaukee friends who were working at Crested Butte Mountain Resort with the student program and John remembers the arrival well. “The night we pulled in, it was dark and snowy and there wasn’t a single street light on. The only light we could see from the Four-way Stop was at Kochevar’s. There were no cars on Elk Avenue. We pull up in front of Kochevar’s and it was packed. That’s when I met pretty much the entire town. And within a hour, Whitey had taken my last $10 in a pool game.”

Outside, their VW bus wouldn’t start so they pushed it up First Street and down the alley by the old Sign Guys building, plugged in an electric heater and spent the night there. They hadn’t even met up with their friends yet. The next night they got a bunk room at the Forest Queen for $12 a night and it included breakfast. It was October 1986 and they wound up staying a month and a half.

“Alan the owner had us working off the rent by shoveling, cleaning the kitchen, mopping the floors, helping Thelma doing laundry, shopping and making beds. I learned who everyone was, and who was nice and who was naughty, by watching out the window with Thelma. We sat for hours.” Meanwhile, John’s employers from Mt. Snow were frantically calling his parents’ house to see where he was since the lifts were going to start running soon. “I told my father to tell them I’m stuck in Colorado and I’m not leaving.”

He took a job as lift op on Paradise at CBMR. “Crested Butte was mind blowing and I really liked my bosses at lift operations.” He took a second job washing dishes at Casey’s, saying, “That’s where everyone hung out and I’d get a meal.” Between the two jobs, he was able to survive that winter, moving into the four-plex behind the arts center for $225 a month. John turned down the opportunity to purchase it at $39,000 because he thought, “I’m not going to be here for that long.” Eight years later he decided to move down the street.

Jim Talbot was one of the first people who was influential in John’s first winter. “Jim had some hunting camps on the front side of Whiterock Mountain in Perry Creek. He asked if I wanted to help pack out some hunting camps.” Afterwards Jim became John’s tile mentor. “I became part of the Midnight Tile crew. All of us learned from Jimbo.” John became a wrangler for Fantasy Ranch in 1989, which Jim co-owned. “There’d be days we did tile all night and then ride all the next day.” John now has his own company, John Polzin Tile, that he started in 2000 and he admits that his contractors keep him quite busy.

John has a fondness for Irwin, where he spent three years. “I loved it. I loved the solitude, the rawness. What I loved the most was the nights with the crazy whiteout blizzards. I would have the fire lit, playing my guitar and just hanging out watching the storm rage and the snow pile up my deck, knowing the next morning I’d have to break out my 900 mod snowmobile and break track for everyone going down.”

At times, John’s experiences here overwhelm him. “I was taught everything that is available, like skiing, snowbiking, dirt biking, hunting and fishing, by different people,” he says of those who showed him the way of these mountains. “The first time I went to the Gunnison Gorge in the spring of ‘87 was the most epic thing I’ve ever experienced. Thirty-something years later it still blows my mind.”

John understands the connectivity of this community. “We struggle, we fight and we bitch but when I stare at what’s surrounding us, I think, this is me—our houses with the bikes hanging on the fences and the ski gear laying on the snow in front, just those little things mean so much. In the summer, you see the wildflowers and it blows your mind.”

First and foremost, he feels, “When we need each other, everybody’s there. I try to explain this to friends who live in other places—the community, friends, family, hugging each other wherever it may be and the intimacy of the relationships we all have with each other here. It’s so important to me. It’s the most special thing to me about Crested Butte—I love the views but without the people the views wouldn’t be as full.”