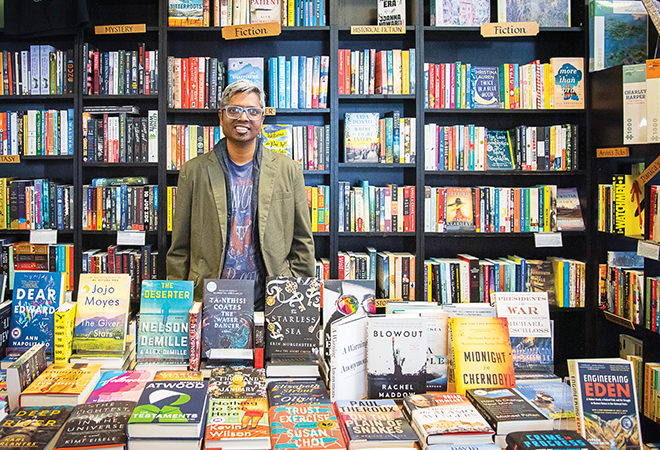 A fellowship of unrepresented voices

“You live in a story when you live in this town.” —Arvin Ramgoolam

Local writer and Townie Books store co-owner Arvin Ramgoolam was notified last week that he had been awarded the prestigious Adina Talve-Goodman Fellowship for his fictional short story, “A Ski Lesson for Geeta.” He was chosen from the many worldwide applicants, he says rather humbly, “Because they liked my story, artist statement and they interviewed my two references.”

The fellowship will allow Ramgoolam the opportunity to work on his submitted story, and others he’s written, with the awarding editors from One Story magazine. Part of the fellowship is also to help improve story writing skills through online classes and a week-long summer conference in New York City.

The Adina Talve-Goodman Fellowship was created by One Story magazine founding editors Hannah Tinti and Maribeth Batcha, in memory of an editor at the publication. One Story is a literary magazine founded in 2002 and publishes 12 times a year, each issue containing a single short story. The magazine prides itself on discovering talented new writers like J.D. Salinger.

The fellowship is awarded yearly to a single writer. Ramgoolam is the second recipient of the award. “All entries are short fiction and meant for literary writers; in other words, not science fiction or romance, but fiction that would be considered mainstream artistic,” he explains. The award and magazine are built on the premise of providing opportunity for unrepresented voices.

“A Ski Lesson for Geeta” has never been published before, so it’s not yet available to the public. “It’s a story I’ve been working on for six or seven years and finally felt that it was strong enough to be used for the fellowship application,” Ramgoolam says.

The story unfolds around a woman who is from a Indo-Caribbean background similar to the one from which Ramgoolam hails. The young woman lives in a ski town and decides to help a visiting East Indian family learn to ski. An extreme skier, she comes across a family who is struggling to even get their skis on.

“So there are these two worlds, someone who doesn’t look like they belong in a ski town but she’s very comfortable and knows all the ski patrollers, all the lift ops and the people, and she interacts with this family who is also seemingly out of place, being minorities in a ski town on a ski mountain. She helps them learn how to ski… and it doesn’t end well,” Ramgoolam discloses. “Most short stories don’t have happy endings. Typically, they’re always bittersweet. When people write their short stories, it reflects the bittersweet nature in life that we all experience, and it stays with you because of that.”

The work Ramgoolan does, he says, is generally centered on people with a background similar to his own. “It has to do with the types of stories that I like to tell and recognize. I’ve been doing that without any regard as to whether I could publish those stories at all, or if anyone would even read them, but I’ve been writing them for a long time.”

Ramgoolam became inspired recently by Colorado writer Kali Fajardo-Anstine, who had a book of short stories based on her Latina-Native American background. “She had been told throughout her years of writing that she needed to focus on either Latina or Native American,” Ramgoolam says, noting that she was advised that she had to choose one or the other, which culture she was going to write stories about, but she refused.

Ramgoolan explains, “She decided to tell her own complicated story, expressing her own artwork. Her book came out and she was a finalist in the National Book Award this year.”

Ramgoolam says that her experience spoke to him, that a really well-crafted short fiction story, based on people’s mixed backgrounds with seemingly complicated origins, can work.

Ramgoolam admits that he’s most excited about working with the people from One Story. “The woman who started the One Story magazine is actually one of my favorite authors, Hannah Tinti. Part of the fellowship is working one-on-one on a manuscript so I’m getting the professional low-down on my work. It’s a huge opportunity, especially for someone who’s never published anything.”

He has dozens of stories he’s written, he estimates, saying,  “Roughly 10 solid stories that I’ve been working on through the years that are worth the time and energy to make better. The fellowship will help with some of those.” At the end of the fellowship when he has the one-on-one consultation with Hannah Tinti, she’ll advise him as to which stories, in her professional expertise, she feels are the strongest out of the 10.

Ramgoolam’s been writing fiction since he was a teen and has been submitting stories for years. “I’ve always loved stories and it’s the reason why we have the bookstore,” he says of Townie Books, which he owns with his wife, Danica. However, there’s the frustrating side of all artistic endeavors as well, times when a creative just wants to throw up their hands and throw in the towel, but accolades for Ramgoolam’s work arrived at precisely the right moment.

“One of the biggest times for me was back in 2008 when I won the Sandy Award,” he says, an award named after local authors Sandy Fails and Sandy Cortner. Arvin entered into the writing competition during the now defunct Crested Butte Writers Conference, and he says, “That was a pretty big crossroads for me because I was pretty sure I was going to stop writing at that point. I wasn’t getting anywhere but the award was a huge encouragement. It also introduced me to all the amazing writers in this town, who really sustained me for a long time. It was so supportive and having that validation of being asked to write for the Crested Butte Magazine.

“That’s one of the big things that kept me going when I felt I had work to do, I have life to get on with,” he says of his efforts to stop writing. In fact, even as he submitted his award-winning story for the fellowship, he was halfway through studying for his real estate license. That’s now been put on permanent hold, forever, and he smiles, “So, this is like the universe intervening to say, you need to stay on this path.” Instead of his being a writer who writes for 15 minutes at the end of the day, the fellowship will now allow him to be a full-time writer, working on his stories as he would a day job.

So now, he wakes and writes. His twin 4-year-old daughters, Anya and Sahira, are the other component of inspiration, he says. “After having them I wanted to be able to show them that no matter what you do in life, you can do your job but you can also have an artistic life and be passionate about things outside of what makes you money. They already tell each other stories. Their creativity has no boundaries. They’re uninhibited.”

At the conference, there’ll be literary agents and editors from publishing houses. “Being able to interact with them one-on-one, face-to-face, is huge because I don’t have that access here.” He feels he has the best of both worlds living in Crested Butte where, he says, “I get to live the Crested Butte life, have the bookstore and now, I get to have this literary life that I thought I’d have to move to NYC to pursue… but I get to have it here. I’m very lucky.”

His advice for those writers going through the hardship and frustration of making their craft work is, “Just keep at it. The opportunities are there. I’ve been writing for a long time without any indication that this is what I should keep doing and this is madness. Writers have this sort of superhuman level of being able to take rejection and without any compensation. But you enjoy what you do and that’s really the reason to keep going, because you love writing and you’re passionate about it.”

The fellowship allows an artist to receive recognition for his or her work. Although Ramgoolam doesn’t know where his journey will lead, he says this will be the start of the road towards his goal. “My goal would be to have a short story collection published and a novel,” for which he already has a concept. “It would deal with stories about people who are immigrants and who are traveling across the world and meet at a certain time, characters from a diverse background meeting in the American West and who collide with one another, moving through time and space to this one point where they meet.” He notes that Crested Butte’s rich immigrant history inspired him.

“People talk about the city being an amazingly diverse place, but you don’t really interact with people in the city like you do here, where you get to hear their stories and understand them, and the different layers of people. You live in a story when you live in this town,” Ramgoolam says of Crested Butte.