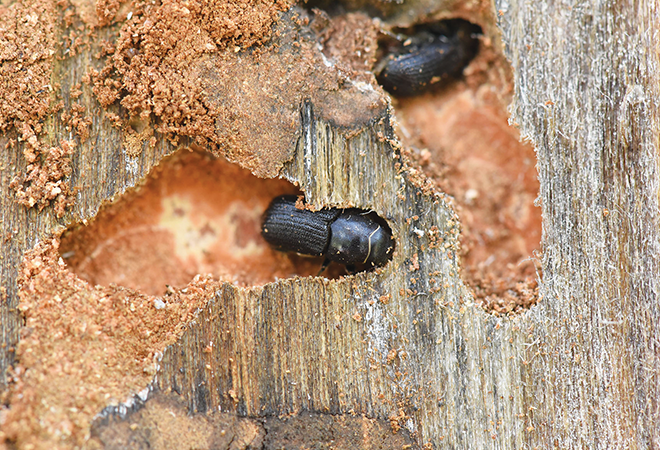 “The forests are always changing”

The 2019 aerial survey of Colorado’s forests shows that each of the various bark beetles that cause tree mortality are, unfortunately, here in Gunnison County. But according to the Colorado State Forest Service, they aren’t necessarily in each forest or on every tree, and if managed appropriately they can even be a part of overall forest health. The key is continued collaboration between various agencies and private property owners.

The USDA Forest Service, the Rocky Mountain Region, and the Colorado State Forest Service released the results of last year’s aerial detection survey and survey map on January 27. The agencies lead this survey each year to monitor forest health conditions on millions of forested acres across Colorado. The 2019 survey pilots used a custom, web-based application allowing the US Forest Service to share data during flights in real time with partners and the public to enhance the response capacity and cover areas more efficiently.

“Healthy, resilient forests are crucial to ensure that the American public continues to have clean water and air, wildlife habitat and recreational opportunities,” said Jennifer Eberlien, acting regional forester for the US Forest Service, Rocky Mountain Region in a news release earlier this month. “This report is a snapshot of year-round proactive efforts to manage forests statewide, promote healthy landscapes and shared stewardship.”

Colorado State Forest Service forester Mike Tarantino reviewed the results for the Gunnison Valley and surrounding areas, noting that three large local disturbances involve spruce bark beetles, Douglas fir beetles and mountain pine beetles. Spruce beetle remains the most damaging forest pest in the state for the eighth consecutive year, and has active populations within Gunnison County as well. Despite this, there is less spruce bark beetle in the forest, confirmed Tarantino‒ although he could not say whether that will prove true in the long run or if the late 2019 spring skewed numbers and delayed tree symptoms.

Although the number of acres affected by this beetle declined for the fifth year in a row, the beetle continues to spread to previously unaffected areas, including 25,000 new acres of forest last year.

Spruce beetle outbreaks have caused tree mortality on roughly 1.87 million acres in Colorado since 2000, and about 41 percent of the spruce-fir forests in the state have now been affected, according to the CSFS. Primary areas impacted by spruce beetle include forestlands in and around the West Elk Mountains, the Sawatch Range, Rocky Mountain National Park and portions of the San Juan Mountains.

Roundheaded pine beetle, along with associated native bark beetles, showed a slight decline in ponderosa pine forests in southwest Colorado from 2018, but CSFS warns that this may be a false result based on varying temperature and precipitation levels in the past two years.

From dry and hot to wet and mild

The report describes the survey’s record of precipitation and daily temperature patterns that affect how well trees in the state’s forests can ward off pests to remain healthy and resilient. Record-low precipitation levels in 2018 in this part of the state weakened tree defenses, providing an environmental window that continues to favor an increase in beetle populations in southwest Colorado. 2018 was the second driest on record since 1895, according to the National Oceanic and Atmospheric Administration.

“This was good for Colorado’s trees impacted by bark beetles. Adequate precipitation in 2019 bolstered their defenses by helping trees produce enough sap to resist insects attempting to enter through the bark,” said the report. “However, this precipitation, coupled with mild temperatures, caused heavy snowpack to persist later than usual, delaying tree symptoms from insect attacks. This made aerial detections difficult, which may explain the decline in acres affected by spruce beetle.”

The survey shows that wet spring conditions in 2019 also created favorable conditions for several species of leaf fungi, which can cause early leaf drop and spotting on leaves of cottonwood, aspen and poplar trees. Defoliating insects may also cause damage. Surveyors detected defoliation and fungus among the aspen groves on Kebler Pass in particular. However, the report states, “These insects and diseases rarely cause significant tree decline unless trees are severely defoliated over multiple years.”

In addition, the aerial survey showed the effects of other insects on forests. Douglas fir beetle affected numerous pockets of forestland covering 7,400 acres, down from 14,000 acres in 2018, and the mountain pine beetle affected only 720 acres statewide. While mountain pine beetle activity remains at natural, endemic levels, the aerial survey found a slight uptick in this beetle’s activity in the Taylor River drainage in Gunnison County.

The survey identified trees in declining health near the Wilder subdivision, resulting from the mountain pine beetle, on both private and National Forest System lands.

The Western balsam bark beetle was found throughout the East River and in Baxter Gulch. Tarantino refers to this in general as “subalpine fir decline, an overall result we see in the tree stands at transitional elevations.”

Tarantino wanted to be clear that all the bark beetles mentioned are native, endemic species that are part of the forest cycles. “So they have evolved with the trees themselves. But we are wondering if these outbreaks that we’re seeing now are outside of those natural levels.”

Tarantino said the trees that do fall prey to the beetles can create a “mosaic on the landscape,” and there can absolutely be some benefits. “They are promoting diversity on the landscape, one way or the other—whether by beetles, by fire or by active [human] management.”

Tarantino added that without records of historic beetle epidemics and cycles, it is difficult to place this period in context. “What’s interesting with these beetle epidemics is we aren’t really sure how big these [cycles] would have been in the past. All these beetles have been active in a predator/prey relationship as long as the trees themselves have been here. One thing that’s hard for us to visualize or understand is that the forests are always changing.”

Ultimately, because the CSFS manages very little land within Gunnison County, the agency plays a role here of collaborating with the USFS and with private property owners to assist in forest management and with education and public outreach.

The rough data from the survey provides a bird’s eye view, but Tarantino emphasized that within these “painted pictures, there is a variety of severity.” He encouraged private landowners to make assessments on their own property and to reach out to the forest service agencies for information and support.

“These bark beetles don’t follow jurisdictions,” said Tarantino. “They follow ridge tops and tree stands…and there is a lot of private land in between.”

“Colorado’s forests are vital to the economic and ecological health of our state,” said Mike Lester, director of the Colorado State Forest Service. “Our partnership with the U.S. Forest Service on the aerial survey offers another great example of how working together, we can effectively address forest health issues that span property boundaries, like bark beetle outbreaks. With information from the survey, we better understand the health of our forests and can focus our efforts where they’ll make the biggest impact.”

The full, interactive aerial survey results can be found at https://bit.ly/38xkk3y.