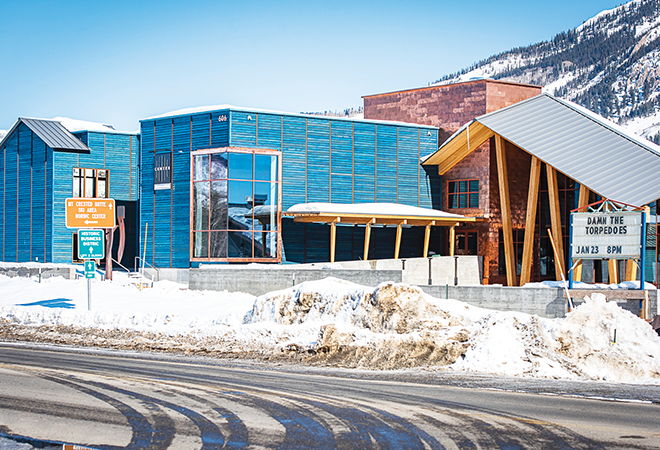 Perfect? No. Panicking? No.

It is no secret that the Crested Butte Center for the Arts board of directors would love to have its building finished and paid for by now. That isn’t the case but the board is confident that—based on existing pledges to be paid over the next few years—it is in a solid position to be debt-free once all the pledges are fulfilled.

That confidence was ratified Monday, February 3 after the Crested Butte Town Council approved a proposed lease with the Center that basically runs 80 years, through a 50-year base agreement with three 10-year extensions.

The Center has two separate budgets: the building and capital budget dedicated to constructing the new Center and the annual operations budget. Town staff met with Center representatives Monday to go over details of each. Center board of directors president Joel Benisch says both are carrying some debt but it is not anything that can’t be eliminated. Based on very early returns from the first shows in the new Crested Butte Center for the Arts this winter, he is more confident than ever that will happen.

The total cost to construct the new building was $19,524,676, and consisted of $16,522,852 in hard construction costs, with the rest being so-called soft costs such as architects, engineers, surveyors, advertising, and fundraising expenses. The Center had to borrow money to pay all those costs on a timely basis. Benisch emphasized this borrowing was fully anticipated by the town and the Center before groundbreaking.

The capital budget has two primary outstanding debts. The first is the bridge loan with the Community Banks of Colorado for about $3 million. The second is the remaining $484,510 in hard construction costs due to Crocket Farnell’s Black Dragon Development, the general contractor on the project. Benisch said most of the construction debt due to Farnell is “retainage funds” that will be paid to the subcontractors after their punch lists are finalized over the next few months.

Farnell confirmed that he is comfortable with the arrangement Black Dragon has with the Center and doesn’t have issues from his perspective. However some of the subcontractors have quietly expressed dissatisfaction with how the project concluded in terms of their financial exposure.

Under the board’s plan, the loan with Community Banks will take longer to pay off since most of it is tied to pledges scheduled to come in over the next few years. “The costs of the building were always expected to come in before all of the pledges were collected,” explained Benisch. “The town had obligated the Center to have a $1 million letter of credit to cover unexpected costs and we did that. The first year of construction was actually really warm and we were able to move much faster than anticipated, so costs came in faster than originally expected.

“The donor who supplied that letter of credit for the first year had committed to providing it for only one year so we went to the Community Banks in town and they were great,” Benisch continued. “Everyone was aware that construction bills would come in before final pledges were paid so a bridge loan of some sort would be needed. Community Banks then gave us a $2 million loan based on the collateral of the future pledges.”

Benisch said three major groups of change orders that developed during construction added significant cost to the project. A few requirements from the authorities (town, county and state), some oversights by the design professionals when they drew the plans, and changes requested by donors created the additional costs. He said the last group of change orders was funded by the respective donors based on estimates obtained at the time. Unfortunately, he said, some of those initial estimates understated the final actual costs. “Those change orders were basically underfunded,” said Benisch. “Community Banks stepped up and helped us address the situation as well.”

He explained that nine board members agreed to personally guarantee that last $1 million loan in the capital budget. “Given the confidence of the board and now the town, which approved the longer lease, has shown, we hope everyone understands that the plan in place to retire the loan needed to cover the construction costs is well conceived and the situation is being well managed,” he said.

Benisch said the board was appreciative the Town Council had agreed to a new lease term that essentially makes the approved lease an 80-year agreement. “That makes our donors more comfortable and shows the support of the town.”

Operationally, Benisch said, the budget is totally separate from the building budget. And he postulated that based on the first few months of operating, things look good.

With the new building and structure of the Center, the annual operating budget has grown significantly to about $2.6 million, up from about $700,000 a few years ago. Most of that comes in payroll with 15 full-time employees and 25 part-time employees like the tech crew, bartenders and security. Other increases in costs for the larger building come with heating, lights and electricity.

“The board took a sharp pencil to the budget and it’s as thin as possible but shows a small surplus,” said Benisch. “The board received an update two weeks ago and we are happy with where we are. Ticket sales for the shows we have put on have all been close to sold-out. The bar revenues are much more than expected. Some costs came in higher, such as tech and staff. We had to rent some equipment for bands we didn’t expect. But all of the events have been cash-flow positive and as we get toward the end of March and the winter season we’ll get a better feel. It’s pretty early but we are exceeding the revenue estimate and controlling expenses.”

And don’t forget the fire that contributed to pushing back the opening of the building. The June fire at the factory in Belgium destroyed the 405 custom-made seats for the new theater, which have since been reconstructed. In theory they are en route to the Center from Europe and should arrive in Crested Butte by the middle of February.

Benisch said the delay in opening the new building, which the board had hoped would happen in June or July, added extra costs that put the Center in operational debt. Like many seasonal businesses in the valley, the Center has a line of credit to help the cash flow in off-seasons. That line of credit is usually paid off the following busy season. But last summer, with the new building not completed, several shows were cancelled and expected revenues didn’t materialize. The bottom line is that operationally, about $180,000 needs to be paid down on the Center’s line of credit from last summer.

“Normally we would have gotten the line of credit to zero by the end of the summer but it is still out there,” Benisch said. “We need to pay off that line of credit and it is part of this year’s budget. That has nothing to do with the building budget. But as long as the returns come in like they have the first ten weeks of the winter season, we’ll be fine.”

Another issue hanging out there in the community with the Center is its relationships with local non-profits that use the Center. The Crested Butte News reached out to several of the local organizations and in both on- and off-the-record comments the general consensus was that the partnership was not all unicorns and rainbows. But most understood the changes and positive potential that comes with the new facility. There was a general understanding the Center was the big Kahuna on the block and each was dependent on the Center. That grated some of the other non-profit leaders. Others accepted the reality.

One of the big changes is the amount it costs to use the new Center. It certainly won’t be cheaper but there is a long schedule of individual rates for each of the spaces within the new facility.

Erica Vernon is the executive director of the Crested Butte Music Festival and a former employee at the Center. She said she has strong relationships with those at the Center. “I am very supportive of the new Center,” she said. “I see the new facility in high demand and believe a better system needs to be developed to allocate the space in a way that best achieves the community’s intentions and desires. The Music Festival is excited to present world-class artists in the new state-of-the-art Center, taking advantage of the space’s beauty and versatility. We look forward to co-evolving with the Center, shifting our relationship to exploit fresh opportunities for synergies and drop those that are waning.”

Benisch said the board understands there is angst among some non-profits about the costs of using the new Center. “Yes, it certainly costs more for them to use the new building but it is a bigger facility with spaces and capabilities that are not present in the old building,” he said. “The reality is that it costs more to run the larger, more complex facility. But they can also sell 40 percent more tickets with the new building.”

Benisch said the Center is still allowing groups to rent the old Center space for events, but that won’t be true forever. “Everyone will eventually get pushed into the new building. The town is very anxious for us to demonstrate full utilization of the facilities of the new building,” he said. “And the groups are understanding that while we built this wonderful new building, we didn’t build it for specific purposes. Everything is multi-use—so for example, the School of Dance has expressed their willingness to fundraise the costs of providing mirrors and dance barres for their programs to be used in the multi-use room. The film festival is investigating ways to purchase a high-end DCP”—that is, a digital camera projector.

Overall, Benisch said he understands the rumor mill of Crested Butte but there is no reason for the town or community to be concerned about the state of the Center. “Am I very comfortable?” he asked. “Yes, but I hate debt of any kind. I wish we had zero debt right now. I wish we had title to the property so we could manage the debt better but the new 80-year term on the lease with the town is a good step forward. There is no reason to believe that we can’t service that debt and pay it all off over the next four or five years as our pledges come in.

“Early indications are that results of the winter season operation budget are positive and we have started out strong operationally,” Benisch added. “The fact is that 60 percent of the Center operating funds come from donations and sponsorships and 40 percent through revenue like ticket sales and rental fees. But the Center is a central part of the entire valley and helps bring millions of dollars into the economy of both Crested Butte and Gunnison County. We believe in what we provide the community and see no reason to believe that we won’t be doing it for a long time. We believe that we are in control of our situation as of now, and it will only get better in the future.”

Share
Previous BOCC comes out against bringing wolves back
Next Profile: Marcia Hegeman