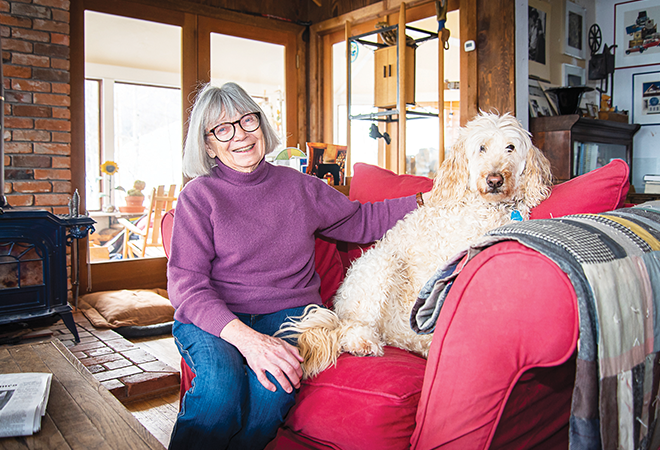 Nala, Marcia Hegeman’s goldendoodle, sits in a cushy chair that faces large windows that look out over Paradise Divide from the very top of the hill at the end of Maroon Ave. Marcia and her husband, Alan, are what some might call new old-timers—those who got here in that era after the mines closed down and before the ski bum boom went full force. Having arrived in their youthful years, they are now after almost half a century well into their golden years.

Marcia was born in Kansas City, Mo. Her family moved to Poteau, Okla. when she was six. Marcia admits that she was a very spoiled only child. She recalls her childhood in a notably different America and although her family came through the Great Depression and then into the turmoil of World War II, she has fond memories. “I remember riding on street cars when I was a young girl. My mother and I would go downtown and have lunch at a department store,” like Klein’s, she recalls, and notes, “It was a far different world then. Two months after we moved to Oklahoma, the war started. I was in the car with my parents when they announced the bombing of Pearl Harbor.”

Poteau was a small town and Marcia spent her youth with many friends, having slumber parties and hiking in the Ozarks. High school brought dances; sororities, along with fraternities, were very important in her community. “My main interest was the school newspaper. We started the weekly paper when I was in seventh grade,” she says. “It was fun. It wasn’t part of the school,” she explains. A group of her friends and other students got together and started the newspaper themselves, utilizing the school on Thursday nights for production of the Friday publication. “We had one girl who could type stencils,” the layout method of the time, “then we’d mimeograph the paper.” The mimeograph was the precursor to a photocopier, entailing a lot more work and they couldn’t print photographs. Marcia also worked on putting her school’s yearbook together.

When her father took a job with the railroad when Marcia was a senior in high school, her family moved again, to Oklahoma City. She remembers, “It was quite different. It was a big-city high school. It was difficult but I survived.”

She graduated in 1953 and enrolled at Oklahoma City University. “Everybody I knew went to college, it’s just what you did,” and another thing that women in particular did in that era was to sometimes get married and not finish college, which is what Marcia did. She fell in love and married Larry McKinney in 1956. The couple had two children, Lisa, born in 1957 and Vicki, born in 1960. Tragically, her husband was killed in a car accident in 1967 and Marcia remembers, “Everyone, friends and family, were so kind.”

Just three days before her husband died, the family had visited Crested Butte on the suggestion of Oklahoma friends, camping at Lake Irwin for a week. “We didn’t do much in town except to go to Stefanic’s for groceries. I thought Irwin was gorgeous,” she says. As a young widow, she returned to Crested Butte in February 1968 with her daughters and some friends. During that trip, she met Alan Hegeman, a local Crested Butte photographer, with whom she kept in touch with after she returned home.

In June that year, she decided to visit again, obviously enamored of both Alan and Crested Butte. She flew out, this time for Alan’s birthday in August. They were married three weeks later. “We’ve been inseparable ever since,” she smiles. The newlyweds drove back to Oklahoma City, picked up the kids and moved into the back of Alan’s shop on Elk Avenue, Heg’s Place Photography, which is where the Milky Way building is now. Their daughter Laura was born in 1973, and Butch was born in 1974. “He’s the thirteenth Alanson,” she tells of the traditional family name and she laughs about the task of raising teenage daughters alongside two little babies.

The adjustment for a warm-blooded Oklahoma girl wasn’t too bad but Marcia says, “That year was a very cold winter, obviously much colder than what I was used to. The girls had to wear dresses to school because their teacher, Mary Yelenick, required it,” but they did have snow pants under those dresses. “There were hardly any kids, maybe 30 kids in the whole school and several grades in one classroom.”

The girls adjusted to their new environment and climate fairly soon and thoroughly enjoyed skiing. It was a different lifestyle with far more freedom and Marcia puzzled over what exactly the kids in town were doing with their days. “They seemed to be roaming around all the time. I don’t know what they did!”

Marcia was mostly working at the photography studio and since there was no place in town to buy books back then, she decided to open a book store in the shop in 1971, “in there with the cameras and processing. Nothing is more fun than ordering a box of books and then, when they arrive, it’s like Christmas morning. It was very informal—the books were just lying around on tables and people seemed to love it.”

Nowadays she feels thankful that there’s a bookstore in town. “Thank goodness for books and Townie Books. Right now I’m rereading things I read over 20 years ago. I rarely read American authors, mainly British. I love the British culture and history. The lifestyle, the fantasy of the whole thing. Having British friends like Susan Anderton and Judy Clark might have influenced me. The world’s best book club was the Ladies Literary League here in the mid-90s through the 2000s, which met once a month on Sunday afternoons. The hostess would pick the book, have a cooking theme, and we’d send out handwritten invitations. It was really something. None of us have ever forgotten the club.”

They were still living in the back of the shop in 1970 when they started building their home on the top of Maroon Avenue. “There was a picture in a magazine of a house that we liked the layout of and back then there was no BOZAR,” she smiles. Lee Starritt built the house. “He framed it in and we were going to finish the interior ourselves.” A year later, they moved in and Marcia laughs that there are still some things they haven’t finished yet in the house.

In the 1990s, Marcia was on BOZAR because, she says, “I thought it was interesting and I liked the idea of keeping the town historic.” She served for 11 years. “I loved it. It was hard, though, because I knew too many people and friends who were building homes that we had to say no to.”

She also served on the board of the Crested Butte Land Trust for a long time, as well as several years on the 1% for Open Space board from its inception. “The Crested Butte Society was started by some old-timers to try to keep things the way they were,” Marcia explains. “I was part of that off and on for half my life. They put on the best music at the Depot on Monday nights,” back when that building was still in the middle of a field. “Ralph Clark gave the Depot building to the Crested Butte Society and eventually, the building was given to town by the society.”

Marcia closed up the bookstore and Alan closed up his photography shop in 2000. “I had turned 65. Living here was great and very easy to make friends. I could have lived anywhere but I was happy living here. I thought it was really gorgeous and I hiked a bit, did some cross county skiing and in the summer I ran, so I could be by myself,“ she says of her earlier days. “Alan wouldn’t want to live any place else and I feel that way too. It gets a little more complicated with age living here but we have three kids here—Lisa, Laura and Butch—and three grandchildren. I’m pretty happy.”