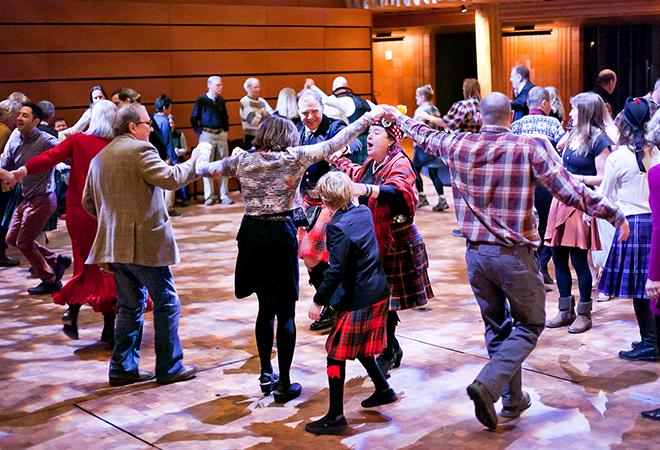 SCOTTISH BURNS SUPPER: In conjunction with the January 25 Scottish holiday in honor of the birthday of Scottish national poet Robert Burns, the new Center for the Arts hosted a lively evening of the traditional Scottish dish, haggis, along with toasts, whiskey, bagpipes and reading Burns’ poetry. History of the first Scottish settler to the valley was presented by Dr. Duane Vandenbusche.

The Crested Butte Avalanche Center is hosting their monthly Fireside Chat Series at the Gunnison Library on Wednesday, February 12 from 6 to 7:30 p.m. There will be complimentary Avery beer and CBAC forecaster and IMFGA guide Ian Havlick will give a presentation on close calls, near misses and related mistakes. There will also be an opportunity for an open discussion on any topics related to the snow, riding and anything else that perks your interest in the avalanche world. Best of all, it’s free.

Kicking off the week is Watercolor & Wine (Thursday, February 6) covering the skills you need to compose a watercolor painting, and the liquid encouragement to let your creativity fly. To delve even deeper into the wine world, The Art of Winemaking (Saturday, February 8) features its first in a two-part series with Winemaker Joe Buckel of Buckel Family Wines. Explore the art of blending in this hands-on class. Wrapping up the week, and just in time to prep for Valentine’s Day is the Couples Class – Tour Italiano with the effervescent Chef Michael Busse (Tuesday, February 11). Tour Italy’s hottest foodie destinations as this class travels course by course through the motherland. Calling all artists and other professionals! Wordsmith your way into perfectly penning your passions about why you do what you do in The Artist Statement or Raison d’être (Wednesday, February 12). Get the help you need for this vital piece of your website, brochure or other marketing materials.

The Sustainable CB Boomerang bag volunteers know how you love the bags and re-use them, but ask that you please return all those forgotten bags that are in your house or car so we can put them back into circulation! Please return to a rack at the Chamber/ Mt. CB bus stop or to a participating store or hotel. Thanks again for your help in this campaign to reduce the single use habit.

In order to acquaint yourself with some of the smaller, or shorter films vying for Oscars, check out Crested Butte Film Festival’s offering of the “Oscar Nominated Short Films” over the weekend of February 7-9 and leading directly up to the telecast itself. Out of all the short films made worldwide in 2019, the Oscars have honed the list down to the best five in three categories: Documentary, Live Action (scripted and acted) and Animated. One of these films in each category, and the filmmakers involved, will win the Oscar and have their lives forever changed. Show times at the Center for the Arts—the old building—are: Documentary films, Friday, February 7 at 7 p.m.; Live Action films, Saturday, February 8 at 7 p.m.; Animated films, Sunday, February 9 at 2 p.m.

The 15th annual Winter Wildlands Alliance Backcountry Film Festival will show in Gunnison on Thursday, February 6 at Western Colorado University’s Center Theatre. All proceeds will benefit High Country Conservation Advocates. Adventure, environment and climate, youth outdoors, ski culture—you’ll find it all in this award-winning lineup. Doors open at 6 p.m. and the screening begins at 6:30 p.m. Admission is free with WCU ID or $10 for others.

Cameos: What is the most Effective way to make it snow?