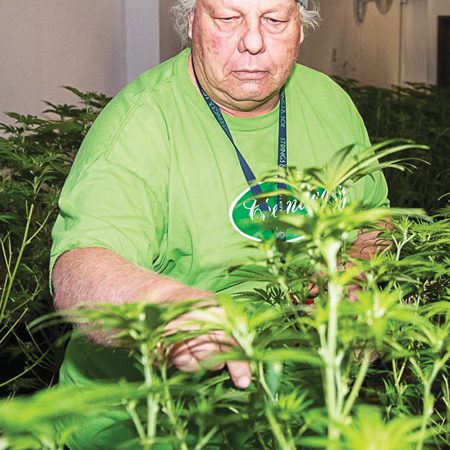 There’s a distinctively pungent aroma that permeates the senses when you’re walking through Rob Carney’s jungle of cannabis. It smells green. Tightly formed buds are in various stages of maturity, loaded on tall tree-like plants in his grow operation, Riverland Remedies. He sells his product under the brand name of Riverland Flower Company since those buds are essentially flowers. His horticulture skills have gotten a glowing reputation, Rob says, mostly due to his grower, Miles Bruce. So much so that his cannabis is now featured in local dispensaries.

Rob’s interest in growing stemmed from when his marijuana won both categories in the local Blazer’s Ball contest, a thumbs-up from the judges and the People’s Choice. He was then invited to the Adam Dunn Invitational, a well-known national competition in Denver for the cannabis industry and he took third that year. The following year, 2015, Rob’s weed placed first in a competition of 42 growers and at that point, Rob surmised, “I knew I was doing something right. I was going up against some of the best growers in the country.” He figured if he could beat some of the best in the country then it was time to go into business.

Rob was born in Bolivia, South America, because his father worked in the oil industry and the family moved around quite a bit—from California to Jackson, Mississippi in what Rob explains was “during the south’s turbulent times, when synagogues right down the street from us were burned down.” In 1968, the family moved to Oklahoma City. The Vietnam war was still raging; his oldest brother, Jan, was a helicopter pilot. “Those times were spent watching the war on TV,” he says. His brothers were much older than he was by a couple of decades but he was close to his special needs sister, Faith, who was only a year and a half older. “Mom was brilliant, a traditional housewife, but basically the caregiver for Faith. I had my neighborhood friends but my sister and I were inseparable until I went to college.”

The family moved to Denver in 1972 and as a kid, Rob became entrenched in the skateboard scene. “I skated every single day from the time I was 10 until I got a car. Instead of having roller skates on your board, the resurgence had urethane wheels so you wouldn’t stop on every rock and pebble in the road. We skated anything and everything, emulating the Dogtown and Zboys. That was our skating style, it was very aggressive. We went to skate parks and also skated the Chatfield dam water release pipe, a huge concrete pipe where you could push your board above vertical. I was always a big kid so it was hard for me but I was actually pretty good at it.”

Rob tells about the other places his clan skated. “The Health Bowl was an abandoned Olympic-size indoor pool. At night, all the druggies went there and threw their beer bottles, needles and garbage into the pool. Every morning we’d go sweep it out, pick up all the garbage and make it skateable.” They’d drive down residential alleys looking for backyard pools in empty houses to skate. “A lot of times you’d get there and there would be people skating already. Most of the time nobody lived there—sometimes the neighbors called the cops.”

When he graduated from Wheatridge High School in 1980, Rob had no idea what he wanted to do. “I came from a traditional family, so you go to college but I wanted nothing to do with college,” he recalls. However, his parents insisted, especially since his brother, who had died in a car accident the previous year, specified that his life insurance policy was to be used to pay for Rob’s tuition.

Even so, school wasn’t a priority for him, and his grades weren’t high so he explored Colorado colleges that had more lenient acceptance parameters—Adams State, Fort Lewis and Western State College (WSC, now Western Colorado University). “I chose WSC because it was closer to home. I didn’t know about Crested Butte and the ski resort when I came to Gunnison. I didn’t even know they had a thing called a ski pass so I only have 39 passes from the mountain,” he says of his 40-year residency in the valley. “I started skiing more and more. As a skier, I was okay. I started hearing more about the ski bum lifestyle. I was spending more time in Crested Butte and had more friends up here than in Gunnison.” Rob laughs that he did the five-year program to get his degree in business and history in 1985, and then moved up to Crested Butte the following year. “All I wanted to do was ski and get better at it, and go see shows.”

In 1983, Rob got his first taste of the Telluride Bluegrass Festival. “The whole way down we listened to the Grateful Dead and I had never listened to the Dead,” he says, and he was wowed. “The festival blew my mind, Bill Monroe and Sam Bush’s Newgrass Revival—I was hooked. The Bluegrass Fest became my life, along with seeing the Dead all around the country. I had no idea people traveled to see bands. My first Dead show was New Year’s Eve 1984-85 and I thought, Wow, what a community. I went to as many shows as I could possibly see.”

Rob was working at McDell’s, which is now Clark’s Market. He fell in love with mountain biking that summer. “I was determined to get into shape. I was heavy but I got good at riding.” Later, he worked at The Marketplace and learned to be a short order cook, then went on to Angelo’s in 1990, where he worked for a decade, starting as a diver and working his way up to general manager.

“All I really did was skiing, bike riding and going to Dead shows and Telluride Bluegrass. In 1990 I followed the Dead across Europe. I had a great time,” he says of the two-month sojourn that led into his interest in the production side of music for 11 years for Planet Bluegrass. He was also the archivist for Four Corners, recording all their bluegrass festivals. “I’m still doing it but not as much,” he notes. Rob was stage manager for Leftover Salmon from 2009 to 2013.

Rob became interested in growing professionally when cannabis was legalized in Colorado. “I was working up at Paradise Warming House as assistant front end manager when I got a job as a budtender at the Crested Butte Wellness Center, now Backcountry Cannabis. I had an opportunity to move to Longmont in 2014 to work for a start-up company growing CBD hemp but it didn’t really work out,” so after a year he moved back to Crested Butte to work at various grow facilities, which he did for four years.

Riverland Remedies began selling its first crop in 2018, but in 2019 Rob’s sister died the day before his birthday and his beloved dog, Chispas, died a month later. Rob was devastated at the loss of his most beloved family and times became difficult, but he continued to press forward. “I made one of the best decisions I ever made, in December of 2019, by hiring Miles Bruce as a grower. I had realized that I didn’t have the physical strength to do the work anymore and first hired John Hiekkila as trimmer, then Miles helped me turn this place around.”

Rob then hired a brokerage company to start selling his product. “Distribution is tough. We couldn’t figure out how to sell our pot. I had hired a consultant to help get my business going. Once we started using the brokerage company, we started selling product.” Rob feels his company has come together through hard work. He works seven days a week. Last Sunday he had his first day off in two and a half years.

“Just through sweat we started pulling ahead, and we did better and better. Skiing, mountain biking, along with music, were my passions forever but as my body started aging, arthritis set in and after two back surgeries for stenosis of the spine I just figured that when I got into my fifties it might be a good time to start a business. Growing was something I could do, but not the physical, so now I have Miles,” he says of the symbiotic owner-grower relationship.

They call it weed, but it takes a highly evolved technology and process with exorbitant overhead to make these hybrid “weeds” grow into a sellable and desirable product. “People have just been loving our product and it’s one of the most popular strains at Soma,” Rob says.

After 40 years, Rob is still enthralled with his community. “In a way, it’s like a family but it’s not, because this family is always coming and going. We know everybody and that’s a good and bad thing because everyone knows your business,” he laughs. “The friendships I’ve developed here have been going on for 40 years in this gorgeous place.”