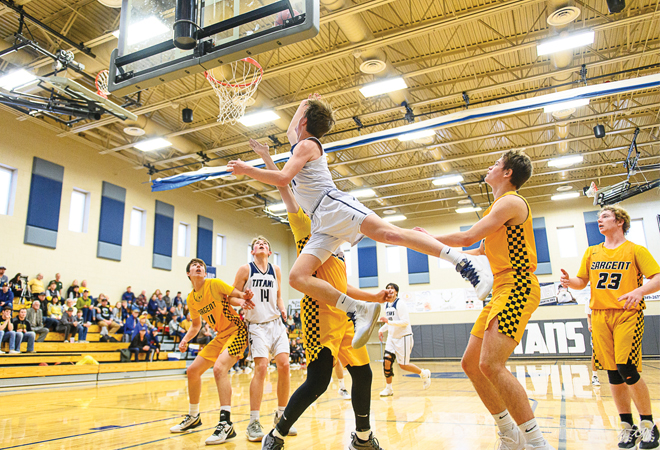 Headed into the district tournament seeded number one

Things got dicey, until they weren’t, as the Crested Butte Titans boys basketball team lost on Thursday, February 20 to the Ouray Trojans, only to take their frustration from the loss out on Sargent on Saturday, February 22, cruising to a 56-14 win.

“That was a pretty good response to a tough loss,” says coach Brandin Hamilton.

Crested Butte finished the regular season 6-0 in league play, 16-3 overall, are ranked eighth in the state in 2A and earned the number one seed in the district tournament this Friday and Saturday, February 28-29 in Alamosa.

Ouray is one of the top 1A programs in the state and would prove to be a perfect challenge for Crested Butte as the regular season came to a close. A depleted Titans team lost to Ouray earlier this season so expectations were high heading into the game as the Titans had a full squad and were focused on revenge.

For three quarters that played out well for Crested Butte. After closing the first quarter tied 13-13, the Titans outscored Ouray 33-20 over the next two quarters to take a 13-point lead into the fourth quarter.

“We were in control of the game, taking care of the little things that worked for us all season,” says Hamilton.

Then disaster struck as Ouray fed off of the hometown crowd to rally back, outscoring Crested Butte 26-5 in the fourth quarter and handing the Titans a brutal 59-51 loss. Erik Wasinger led the team with 20 points while Ethan Bacani scored 16 and dished out six assists.

“We started making some uncharacteristic mistakes and it snowballed,” says Hamilton. “Ouray is a good team and as soon as they saw some light, they went on a run and we couldn’t recover.”

The Titans returned home to host the final regular season game and recover their mojo before heading into the post-season. Once again, they turned to music to bring things back around as they took the floor for their pre-game warm-up with “Because” by the Dave Clark 5—the same band that knocked the Beatles song “I Want to Hold Your Hand” out of the top spot on the UK charts in 1964.

While they did struggle to feed off the energy from the music on offense in the first quarter, defense and rebounding paved the way for Crested Butte to take an 8-4 lead. John Penny then came up with a big block to open the second quarter and five different Titans scored in a number of ways to go on a 21-3 run. While Carlos Franco continued to pull down long rebounds, Wasinger and Bacani found lanes up court for lay-ups. When that wasn’t available, Grayson White and Alan Prieto scored inside, Wasinger bombed from deep and Murphy Smith knocked down free throws.

“We’ve ramped up our defense aggressiveness and a lot of times that sparks our offense,” says Hamilton. “We were able to loosen up while Sargent was in turmoil.”

The Titans didn’t stop there as they continued to handcuff Sargent with tough defense as they knocked down shots on offense. While Franco, Wasinger and Bacani all hit from three-point land, Prieto came up with points inside as well as threading passes to set up others as Crested Butte rolled to a 56-14 win. Wasinger continued his scoring ways with 26 points, Bacani had 16 again and Franco finished with 10 rebounds.

“I told them at halftime to not let up on the gas and to keep playing like you play,” says Hamilton. “That was our whole mentality for the second half.”

“I think we’re in a good spot and we’re still having fun,” says Hamilton. “We’re still pretty light and just out there playing basketball.”