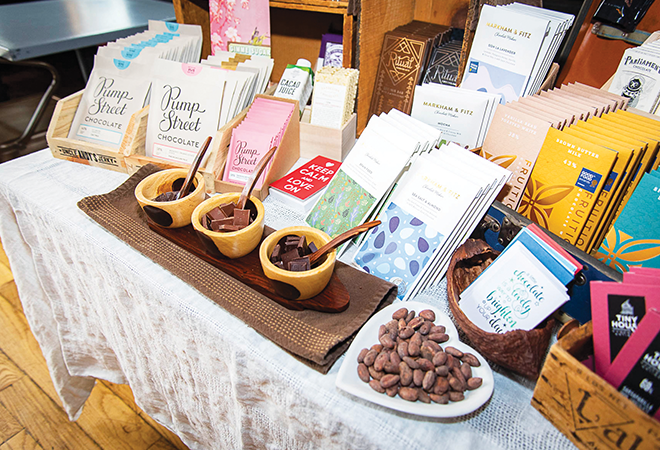 Chocolate. Elixir of the gods and considered an aphrodisiac that inflames desire and opens the hearts of could-be lovers to romance. Long after the Aztecs utilized cacao, European royalty traditionally presented gifts of chocolates mixed with amber as a means to stimulate love. In 1822, John Cadbury opened a tea and coffee shop in Birmingham, England, expanding his business into chocolate making. Forty years later, his son Richard beefed up the family business sales by creating the first-ever heart-shaped box of chocolates for Valentine’s Day.

Chocolate may be responsible for arousing the libido because it triggers the brain to release dopamine, the pleasure chemical that makes us all feel happy and giddy. Dopamine, along with the mood regulator serotonin and oxytocin, a hormone that reduces pain reception and increases emotional connection, occurs naturally when one person is physically attracted to another. But it doesn’t hurt to give sensuality an extra kick with a crafted, decadent chocolate, not the so-called chocolate bars and candies that are passed out at Halloween whose production involves breaking down the cacao, then reconstructing with mostly sugar, vegetable oils and preservatives so that it’s flavored and not “real” chocolate.

Karen Fienberg is sifting through a large box of beautifully packaged chocolate bars that were just delivered from her distributor to her home in Crested Butte. She is a chocolate curator, selecting the finest fair trade, ethically produced and sourced chocolate from all over the world—Iceland, Dubai, the U.K., Japan, Vietnam and France, to name a few, as well as the United States. These are crafted chocolate bars, and her business, The Chocolate Enthusiast, ensures that the process is authentic and transparent from bean to bar.

Karen explains the difference between a chocolatier and a chocolate maker: “A chocolatier makes confections like truffles, bon-bons and bars as well as bulk chocolate, whereas a chocolate maker takes raw cacao beans, roasts them, grinds and refines them, and their finished product will be in bar form. Every chocolate I bring in is sourced in a very transparent way and is most often sourced via direct trade with the farmer so that the farmer gets a price well above the world market price for his beans.”

The beans are the seed of the pod that grows on cacao trees. There are 50 to 60 seeds in a pod and the seeds are imbedded in a fleshy, white, sugary pulp. The contents of the pods, which Karen says look like brains, are scraped out, pulp and seeds, and put into fermentation boxes for about a week, after which they are sun-dried to remove the moisture so the beans don’t mold. At that point, the beans are bagged and sent to chocolate makers.

Theobroma cacao, the Greek genus name, translates into “the food of the gods.” Karen explains that the Mayans turned cacao into a drink, traditionally, an unsweetened elixir. “Chocolate has many health benefits—it’s high in magnesium, iron, antioxidants and it’s a natural mood elevator. Pure cacao has more antioxidants than red wine and blueberries. It’s a super food.”

Naturally, Karen was influenced by her favorite movie, Willy Wonka and the Chocolate Factory, but her quest for chocolate knowledge began by buying and sampling various crafted bars, and culminated last year with a trip to a Belize cacao farm. At the Boulder Bookstore where Karen first began her tasting foray, she had to buy the chocolate bars because there were no samples available. “So, I’d buy 10 at a time, based on packaging and the ingredients.”

She became intrigued enough to subscribe to an online chocolate tasting course with weekly tasting assignments for chocolate of different regions. “I found that I really enjoyed learning about the difference that the sourcing, origin and the talent of the chocolate maker can make in the finished product, and that a pretty package doesn’t mean that there’s a good tasting chocolate inside.”

Because of that, in the pop-up shops she hosts throughout town and the valley, Karen feels it’s imperative to have her customers sample every chocolate bar she offers.

She stumbled on Dandelion Chocolates’ educational trips that are offered by the San Francisco company. “We went to Belize last February to learn about cacao at origin. The trip provided the opportunity of a lifetime, and we couldn’t wait to experience chocolate at origin, learning what goes into growing the wonderful cacao used by chocolate makers to produce the delicious bars many of us eat every day and, in some cases, several times per day. Upon returning from that trip, with a very deep understanding of the role of the cacao farmer in the supply chain, I felt it was how I could contribute to taking care of the soil, farmers and our planet.”

Karen adds that during her trip she felt like she truly experienced the heart of quality cacao. “It all begins with a farmer who cares deeply for his corner of the world and its creatures. I never really thought about this part of the supply chain when enjoying chocolate before but now I will undoubtedly never look at a chocolate bar the same way again.”

There is the sad reality of child labor working the cacao farms, children who arrived either by their own will, coerced with promises and lies or snatched up as young as eight years old to wield machetes and carry 100-pound bags of beans and work hard labor in the fields for less than a dollar a day.

By knowing the source of the beans, and oftentimes dealing directly with the farmer, Karen knows her chocolate is not made with illegal child labor.

In contrast, Mars, Nestlé and Hershey pledged nearly two decades ago to stop using cocoa harvested by children, yet, they haven’t complied or fufilled their agreement and much of the chocolate you buy in the U.S. still starts with child labor.

Karen always imagined having a shop that specializes in high-quality, craft chocolate bars so she’s now looking for a shared space in Crested Butte, and says, “I don’t need a lot of space.” At the moment, her pop-up shop features tastings and pairings of chocolate and spirits, as well as education. “The response has been phenomenal. People will email me to order bars to be sent to them. I have very regular customers.”

Whether you’re wooing a potential love, already coupled, or a member of the Lonely Hearts Club, you owe it to yourself to give in to the allure and experience the real deal chocolate. If one must learn to love themselves before they can love another, start by treating yourself to crafted chocolate.

Check out the community calendar on page 30 for a listing of Karen’s upcoming pop-up shops.