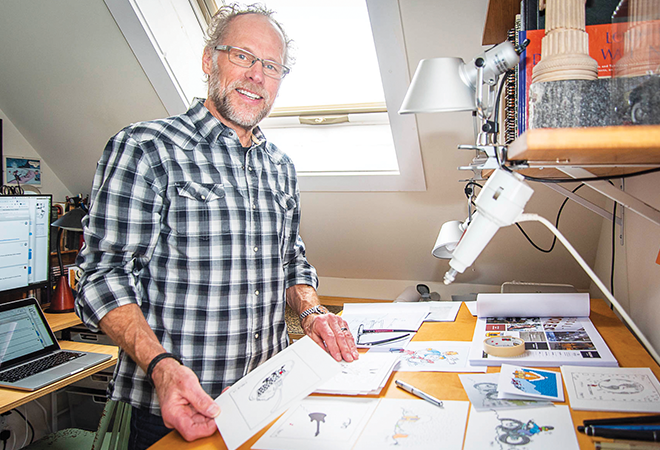 Paul Mack’s walls reflect the culture of the generation of love and peace, represented by an impressive collection of late 1960s psychedelic concert posters. With swirling designs, balloon fonts and contrasting colors, they weren’t meant so much to be read, but as concert promoter Billy Graham said long ago—they were meant to be stared at for long periods of contemplation.

Rockett, the stocky black mini-panther, rolls around on his back in front of the stove, licking his paws clean of a proper catnip dosing. Paul smiles in his stuffed chair, shifts a bit and folds his hands. All is right in his mango-colored, cozy home on Maroon—cat purring in front of the fire, snow dumping a solid white curtain outside, his girlfriend of more than a decade upstairs in their office, and he is exactly where he’s meant to be and where he worked hard to get to.

He bought the “Mango House” in 2000. As an avid bike racer, after competing in the Durango to Silverton race, Paul was drawn to Crested Butte by its mountain biking. “I had always heard wonderful things about this magical place in the mountains,” he says. Paul was living in Boulder, where, he says, “You can ride bikes all winter long because it’s dry.” He traveled up to his Crested Butte home practically every weekend, trying to figure out a way to work from here or at least eventually retire here. Having been raised in a small town, he knew he wanted that type of community.

Paul as born in Carlinville, Ill., where generations of his family lived. “It’s one of those places that, sadly, the population of about 5,000 hasn’t changed for 60 years,” he says of the agricultural town that looks like a Norman Rockwell painting. “Walmart came in and killed all the mom and pop businesses.”

His parents decided to move for work, to Webster Groves, a suburb of St. Louis, Mo. Dad was a CPA after WWII, in which he was a Navy flyer. Mom ran the house taking care of Paul and his two younger sisters. “I’m a Boomer so I had tons of friends my age all through the neighborhood,” he recalls. “We had huge woods to play in because it was still pretty rural. Our parents never worried about us. I remember in first grade, the crowd of kids walking to school would grow as we walked,” he said of the parade as it picked up kids from the houses it passed. “I was very lucky to grow up in a time of innocence. There was a lot of playing in the streets and parks, and building dams in the creek. We’d build these clay structures and dams, kneeling in the water all summer.” When Paul was nine he began swimming lessons and competitions.

As a successful architectural designer and artist, Paul’s talent for drawing started early in kindergarten. “We were supposed to draw a merry-go-round. I drew it as a spiral of motion lines and got a bad grade. My mom was really proud of my bad grade. It’s funny now, traumatizing but typical because art is considered an elective as opposed to a fully integrated part of the human experience. In fifth grade, I’d be drawing flip books on the pages of our textbooks.” He explains that he’d draw stick figures that would tumble across the bottom of the pages and the borders of the book, and the tumbling figure would come to life as you quickly flipped the pages, like film frames of a movie.

One day his best friend Doug arrived at his house with a Time magazine story about the San Francisco art rock poster scene. “The whole rock art movement was starting to get media attention. It was really beautiful.” The two buddies taught themselves silk screening and began designing and printing posters for friends’ bands. “We didn’t get paid but got free concert tickets, which,” he laughs, “were probably worth about 50 cents.” Doug’s father was an architect and the two boys would hang out in his office on weekends. “We became really interested in the world of architectural design. They were doing what I love to do, cutting up paper and building balsa wood models.”

Paul graduated from high school in 1968 with several options for colleges with scholarships. However, after a ride up Flagstaff Mountain above Boulder he was enamored by the mountains and chose CU with a swimming scholarship. “I knew I wanted to be an architect, so my college experience was art, architecture, music, LSD, politics and protesting the Vietnam war.” His draft lottery number was low, 48, and he was sure to be called. “I was in my second year of college when Nixon invaded Cambodia. We took over the Regents building on the CU campus and the National Guard removed us. Somehow I didn’t get arrested. So for me, the experience of college was the culture, all wound together. It still really resonates and triggers other parts— when I hear Neil Young’s song Ohio, I’m brought to tears.”

Paul quit the swim team when the architecture courses and war protests intensified. Forfeiting his scholarship, he now had to pay for his tuition but he joined a water polo team. “It was like a beer league, and I could hold my breath a long time and was a good swimmer. It’s a rough sport—it’s like rugby in the water.”

He graduated in 1974 with a degree in architecture and decided to stay in Boulder. “I loved it. I was living up Fourmile Canyon. I had worked as a carpenter during summers prior to graduation.” With his drawing skills and architectural knowledge, Paul was hired by a small group doing solar research, primarily, the architectural implications of solar.

“I helped illustrate some early books and because of the popularity of the books, they started a small firm called Joint Venture, Inc.” Paul was a full-time employee from 1974 through 1978 and became licensed as an architect at the end of his apprenticeship. “To use the word ‘architect,’ you must have three years of apprenticeship and then pass the state board exam,” he explained.

He struck out on his own for a while but the economy back then wasn’t great. “I did okay but ended up doing mostly presentation work for other architects. I found out that my buddy Doug’s father was opening a firm in Denver,” he says, and they hired him. Paul worked for them for five years, until 1985 when they closed their Denver office. He was traveling a lot, to Dallas, San Francisco, Washington, D.C. and St. Louis. Although there was opportunity, it wasn’t economically feasible, he felt. “There was never a viable job offer with the cash to make me want to leave Boulder.”

He hooked up with a growing design firm in Boulder called Communication Arts, which had designed the Pearl Street pedestrian mall. “It was the age of themed environments where retail and shopping malls would have sculptural and entertainment themes. There was a lot of really exciting speciality fabrications and that was my forte. I’d travel all over to meet with these incredible creatives who would build nearly impossible designs for our projects. It was really fun for a long time.” He later became one of the vice presidents of the firm.

When he quit his job with Doug’s father’s firm, eliminating his commute to Denver, Paul suddenly gained an extra three hours in his day. “I always loved cycling. I raced for fun in college. I decided with the extra time I now had I was going to train and bike race.” He began racing in 1985 with a clan of like-minded guys who were also Masters racing.

“I raced for years and got involved with different teams.” Joining a really good group that started out as the Celestial Seasonings team, Paul began racing with them in 1989. “It went through a lot of literations—Le Peep, Subway, Vic’s Coffee and for the last eight years, it’s been BoulderCentry for Orthopedics.” Although he’s not on their racing team any longer, he’s on the board for the team and still wears their jersey when he rides, trains and races.

In the 1990s Paul took up track racing on the velodrome. “It’s beautiful to watch. Good track racing is like ballet.” He won a national championship in 2006 in the points race. The velodrome, Paul explains, is a closed, banked track, either indoor or outdoor, and bikes are fixed gear with no brakes. He won half a dozen national championships and began to do really well with the team pursuit. “We decided to go to the world championships in Manchester, England in October 2016, and we won it.” So, Paul is a World Champion racer. This year, he also raced in the Fat Bike World Championships in Crested Butte a few weeks ago.

Paul left Communication Arts in 2003 to do his own thing as Paul L. Mack Architecture, LLC (PLMarchitecture.com), art director for specialties, signage and graphics. He then created Rockettoonz, an illustration and card design business, separate from his architecture design. “I designed some letterpress cards and had Eidolon Press in Crested Butte print my first set. I was inspired by Cindi Lang’s work—it’s such a beautiful, tactile and elegant process.”

These days Paul does a lot of consulting for designers, architects and city governments and developers. He’s still avidly into cycling, enjoying the incredible Crested Butte mountain biking. He’s done the West Elk Classic and says, “I’m kind of retired from racing every weekend because I’m having too much fun hiking, biking and skiing up here.”

Paul met Karen Fienberg in 2009 through a friend who had created an all-women’s cycling event in Boulder County. “Karen was working on the post-ride festival and I helped with mapping and course development.”

Although they didn’t meet at the festival, they were both told they should meet. Paul sent an unsolicited email to Karen, who almost deleted it. They met for a blind coffee date and now, 11 years later, they say they never looked back. In December 2018 they moved from Boulder to be full-time Buttians, and Paul says, “More than half our time was spent up here the last two years. It’s been a matter of both of us being able to do our work remotely.”

“Moving up here is something I’ve wanted to do for so, so long and trying to figure out how to make it happen took a while. It’s a community I want to be part of and a small town that I feel is my town. It’s full circle—I was born in a town where we walked everywhere. Here, I can walk to the dentist or the hardware store. I walk everywhere. We have our challenges of course but it’s so meaningful to be to be part of a small town. We’ve always rented our back house to locals. It’s important to us because community is the community that lives here.”

Share
Previous Titan boys on fire; upset Sanford to take top spot in standings
Next The Gospel of Chocolate according to Karen Fienberg