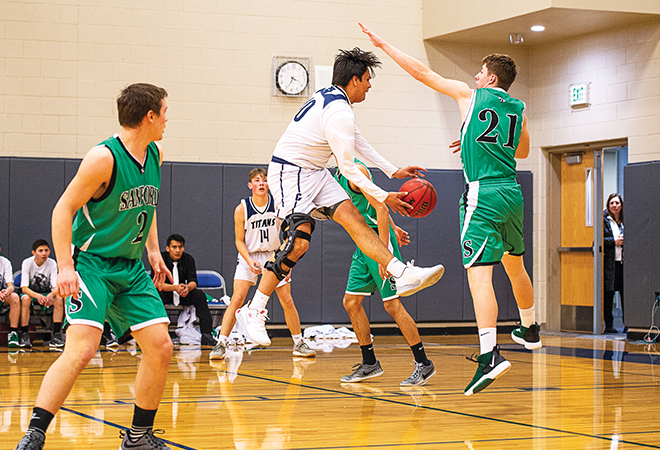 “The guys felt good, they had confidence in their eyes”

The Titan train continues to gain steam as the boys basketball team won two more games over the past week, including an upset win over Sanford, and are now sitting at the top of the District 1 standings.

The Crested Butte Titans boy’s basketball team opened the past week on the road as they headed to Del Norte to face the Tigers on Tuesday, February 4.

The first quarter was a series of long possessions for both teams and while Crested Butte’s offense appeared in synch, things just weren’t clicking when it came to finding the hoop.

Crested Butte’s work on defense was their saving grace and while the Titans’ shooting woes plagued them the entire first quarter, Del Norte struggled to find any success as well and Crested Butte had a 4-3 lead at the end of the first quarter.

“It was nice to not be firing on all pistons on offense but still have the lead,” says Hamilton.

“We got more aggressive defensively and that got us going,” says Hamilton.

The Titans carried their lead through the entire second half and while they never built on it, they never gave in and closed out the 42-27 win. Erik Wasinger led the Titans with 16 points followed by Carlos Franco with nine while Grayson White pulled down 11 rebounds.

“I was pretty happy with the game overall, especially from a defensive standpoint,” says Hamilton.

But the Del Norte game, and all other games really, pale in comparison to the showdown between Crested Butte and Sanford in Mt. Olympus on Saturday, February 8.

Sanford handed Crested Butte a thumping 50-28 loss earlier this season and proceeded to run roughshod through all district opponents throughout the season earning the third spot in the 2A state rankings heading into the game against Crested Butte.

But ever since that first Sanford loss, a new Titans team has emerged and saw equal success over the season and was looking to knock off Sanford for the first time… maybe ever.

What ensued was incredible and still has fans wondering, is this for real?

Hamilton had a game plan in place for Sanford, the same game plan he has had for every game this season, to just play their game no matter who the opponent is. Furthermore, he knew it was important to keep Sanford close to keep the door for a win open.

“We knew it was important for us to compete and have a first half where we felt we could win the game,” says Hamilton.

And the Titans did just that as they held the typically explosive Sanford offense in check and Crested Butte was down just 17-13 at halftime.

“Sanford came out physical but we didn’t seem to be backing down and were just as physical with them,” says Hamilton. “Our defense provided us some confidence and at halftime we were right where we wanted to be. The guys felt good, they had confidence in their eyes.”

Alan Prieto helped set the tone for the Titans at the start of the third quarter with continued physical play and while Crested Butte missed some early looks at the basket, Ethan Bacani hit a big three and their defense did their job to keep Sanford from gaining any rhythm on offense.

Down 23-21 midway through the third, the game took a massive swing as Franco was fouled on a three-point attempt. A disagreement from a Sanford player led to a technical foul and Franco went to the line to hit four of five free throws. Franco followed that with a three-pointer, Wasinger knocked down an additional three-pointer and all of a sudden the Titans were in the lead forcing Sanford to call a timeout. Sanford followed the timeout with a three-pointer but Prieto hit a 12-foot jumper to cap the 12-3 Titans’ run and Crested Butte was up 33-26 heading into the fourth quarter.

“We got hot and started playing like we were in control on offense and stayed controlled against the pressure,” says Hamilton. “I think it was big we took the lead that quarter.”

Wasinger took a pass backdoor from Bacani for a quick bucket to open the fourth quarter but Sanford started chipping away at Crested Butte’s momentum leading to a brief spell of chaos for the Titans.

Then John Penney came off the bench to do what he has done all season, provide a spark. In a matter of 90 seconds Penney pulled down two big rebounds and tallied a three-point play off a press break swinging the game back in Crested Butte’s favor. Meanwhile, Murphy Smith remained busy in the paint battling for rebounds and making things difficult for Sanford’s inside game.

“John and Murphy have been big for us all season and they were huge in the game,” says Hamilton.

Sanford tried everything they could to try and climb back but Crested Butte had an answer for everything, and Crested Butte’s composure down the stretch carried them to the 47-38 win.

“We’ve been in the fourth quarter with a lead a lot this year and we’ve gained experience how to close a game out,” says Hamilton.

Wasinger led the team with 17 points, Franco and Bacani each scored nine while White and Prieto combined for 11 rebounds. Ultimately though, it was about as complete a team win as you’ll ever see.

“Everyone contributed in their own way and I don’t think we had anyone who had a bad game,” says Hamilton. “It was fun.”

The Titans are now sitting in first place in the district with two big games this week, both at home. Crested Butte will host Custer County for Senior Night on Friday, February 14 starting at 4 p.m. and then host Center the next day with games starting at 1 p.m.