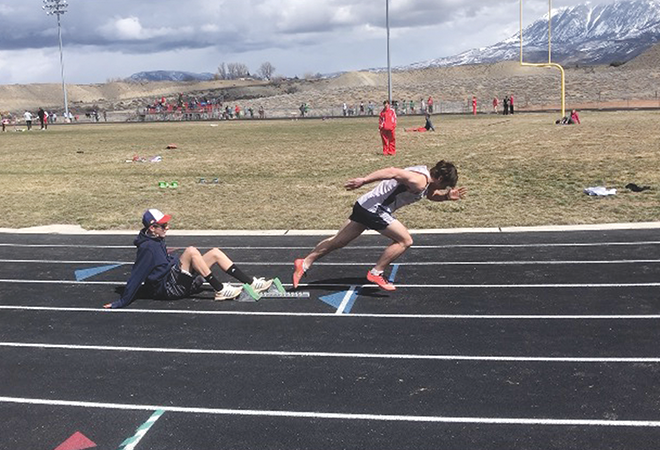 “We were destined for good things but sometimes life takes over”

Last week the directive came down for the Colorado High School Activities Association that all spring activities are on hold.

“Right now all activities and sports are suspended until April 6,” said Crested Butte Community School athletics director Jarrod Hinton. “No contact with coaches, no weight room, no open gyms, nothing.”

Too bad, too, as both the Crested Butte girls soccer team and the track and field program were just ramping up and looking forward to a robust season.

Track and field has a new person in charge this year, though certainly not new to the program or the kids. Mitchell Robertson has done extensive work with local sports programs through Heights Performance, focusing on aspects such as modern dynamic warm- ups, speed development, running form and health. In addition, Robertson started working with the track and field team two years ago as an assistant, stepped into a co-coaching role last season and is now the head coach.

Robertson has an extensive sports performance and coaching history, having coached everything from kids to professional athletes in both the NFL and Major League Baseball since he was 18 years old. Furthermore, Robertson was a high school national champion in 2001 in the 200, 400 and 800 meters, played professional rugby in England and spent some time as a sponsored athlete on the two-man beach volleyball tour.

“Doing anything and everything to avoid the 9-5 job,” says Robertson.

Robertson has Erin Goggins as his assistant. Goggins is the girls volleyball coach and quite an accomplished collegiate track athlete as well, and Christa Merck, who has done extensive coaching at the middle school and high school levels, is joining the team throughout the season.

“We got the necessary parts for a successful season,” says Robertson.

Workouts started out light as Robertson’s focus was preparation without pain and his hope was to continue to show the athletes their true potential.

“We wanted to build into the season easy to avoid injuries,” says Robertson. “I like to show kids that they can train their minds and their bodies to do things they didn’t think they could. It’s pretty amazing to see their minds open up.”

Thirty-four athletes showed up for the pre-season workouts though, and Robertson was looking forward to working with a unique group of tracksters.

“We don’t have that many seniors so it’s a younger group and I really enjoy the younger kids’ enthusiasm and willingness to learn,” says Robertson. “It’s great to see something click and then be able to work on that over the years.”

But, now with sports on hold, Robertson has to just sit tight and wait. In the meantime, he and the coaches will reach out to their athletes with ideas for them during the pause in sports.

“It’s a bummer but, fingers crossed, the season gets back on track,” says Robertson. “We will engage them in weekly challenges, basic stuff that gamifies their task. We can’t train but just keep them engaged physically and use the free time to show they can commit to something on their own. Then if the season restarts, pick up where we left of and keep going.”

The Titans girls soccer team was looking ahead to another successful season, much like the last two. The team made it to the state semifinals for the second year in a row last year, and has 33 players out this year with head coach Julia Kidd at the helm again, joined by Heather Culley and Adrienne Weil.

“We had a pretty lively pre-season and they were all in,” says Kidd.

Once they hit the ground as a team on March 2, Kidd had questions about what the team would look like after losing nine starting seniors from last year’s team.

“One of my primary focuses was figuring out our lineup and how to rebuild our whole system,” says Kidd.

But, as the pre-season progressed, things were looking better than expected.

“It was a high level of soccer right off the bat,” says Kidd. “I was thrilled with what I was seeing.”

But, once the season was put on hold, the coaches and players refocused their efforts looking at the big picture.

“We have always said, ‘We play for each other,’” explains Kidd. “Now our motto is ‘We self-quarantine for each other,’ thinking about the bigger picture and what is going on these days. The girls were sad and I’m sad too. We were destined for good things but sometimes life takes over. Hopefully we’ll get some season out of it.”

In the meantime, everyone is on hold as CHSAA continues to meet at the state level to discuss options moving forward with the spring sports season.

“At the latest we will hear by April 5 but if they know before then, they will let us know,” says Hinton. “I feel like they tend to follow whatever the NCAA does. If we get back in school and the seasons are cancelled, I’m going to encourage coaches to keep things going, keep kids doing things after school. We have 70 kids involved, that’s 30 percent of the high school, and I just worry about keeping them engaged.”

Share
Previous County Update: 3/18 11 a.m.
Next Community steps up in droves throughout the valley to help those in need during COVID-19 crisis