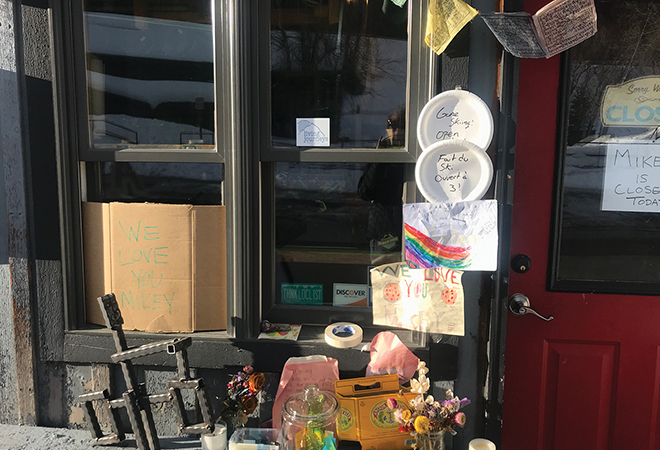 What to talk about when the world as we know and understand it is crashing quickly because of a pandemic. These are strange days indeed.

There was only one thing to do before I started writing an editorial piece on this whole cluster a week-and-a-half into it. I walked outside, strolled about 50 yards from the office and stared at the shrine and comments people were leaving for Mikey Larsen in front of the pizza shop. Mikey died last week just as this coronavirus deal was ramping up. His results haven’t yet come back to see if he was impacted by COVID-19. On Tuesday night there were flowers and prayer flags and notes of love for Mikey. A good man with mountain village attitude, he was loved. People mentioned his kindness, his laugh, his concern for family. Most felt he was riding the big chain ring in the sky, which he would really love. In the end, that’s about all any us can hope for, isn’t it? Love.

Since the county health department kicked it all into high gear I have watched and interacted with the people literally on the local front lines. Our friends, neighbors, acquaintances and people I don’t know well or at all are spending hours every day under duress, trying to protect the people and the place they love. They are making decisions about the community I’m sure they’d rather not even consider. As big a deal as about anything, they have shut down many of the local businesses. The ripple effect is crippling to employees who are wondering how they’ll pay April rent and business owners who are wondering whether to start filing stacks of paperwork or just drop the keys on the counter and walk away.

I’ve spent hours and hours at meetings this last week, either in person or on the phone or zoom, watching and listening to the emergency heartbeat of this community. Your public officials are passionate and concerned and every single one is trying their absolute best to make the wisest decision under the wildest of circumstances.

Elected officials who are bus drivers, retirees, small business people and ski bums are learning about pandemics and trying to shape direction. Professionals who are trained to deal with car wrecks and forest fires are suddenly required to understand a complicated and mysterious virus that is panicking the world. Some people are filled with more adrenaline than others. Cross words are sometimes spoken. Tears are not uncommon. But everyone is trying to do what is right and in this community I see very little panic for which we should be grateful.

I have seen fear, anger, desolation, frustration and resignation but not panic. Those making the decisions and those having to deal with the decisions still respect the greater good. People here seem to be smart enough to know they don’t know everything. They do know they will make mistakes and admit it. They know we will probably lose a few of the vulnerable ones but the goal is to minimize that loss as much as possible. We all know we will be hurt financially but few are whining about their economy collapsing in a heap. The closest I came to tears this week was when Arden Anderson told us how many people he had heard from who want to volunteer to help others in the valley. The call went out and is still being answered. There were almost too many kind and selfless people who volunteered to help in anyway they could. Love.

And frankly, if we are doing it right, a few months from now we’ll be talking about how much we all overreacted in Crested Butte and Gunnison because so few people will have died. That’s the point.

Before shit hits the fan, everything seems so over-the-top alarmist. After it is hitting the fan and the first real casualties start to appear, everything done seems so inadequate. Only time will tell if what we as a community are choosing to do will work. But I can attest from watching your friends and neighbors, decisions are being made out of love.

No one has reneged on their comment that things will get worse before they get better. Still, I see groups everywhere I look talking and laughing and smiling, while staying at least six feet away from one another. I see people stepping up to help and run errands for those who are choosing to not come outside. I see the teachers taking extra steps and the businesses trying to do whatever they can to make the community comfortable. In other words, in the midst of a pandemic rolling through CB and Gunni (not many people in history can say that by the way), I see this broader community doing what it always does: Looking out for our people; Stepping up to do the best we can knowing it may or may not work; Choosing action rather than ceding all control. We are continuing to spread the love faster than the virus. Ultimately that will prevail. It will just be a wild ride in the meantime and sometimes that ride will suck.

So take advantage of the unwanted ride and try to see it as a blessed opportunity. Reconnect with your kids or spouse. Continue to get outside. It’s a pretty nice place to be shut down in, compared to say, Detroit. Learn something new or cook up a fresh dish in the kitchen. Do not spend more than a few minutes mired in national news. That will really suck and not make you feel better at all. Focus on the here. Make yourself smile, and take some deep breaths of the freshest air on the planet.

Honestly, some of us will get sick. Or already have. Or some have the virus and don’t even know. I talked to a local who obviously had caught the virus and his description was not pretty. No one wants to catch this thing and ride that wave. It sounded like the last few days have been at times brutal but he broke the fever and is on the mend.

So there are reasons for these draconian public health measures and constant harping to maintain social distance and sanitary conditions. You can spread the thing when you feel fine. And if it gets to one of those most vulnerable in the community, it can have tragic consequences. So keep taking it seriously and think not just of you and your friends, but of the greater good for the entire community.

One of the incident leaders I’d never met was talking to the main group of decision makers last week. At the end of the meeting he reminded the participants that everyone, absolutely everyone here, is under extreme pressure. So he asked that you allow them some grace and move forward. Amen.

Allow everyone some grace…and move forward.

There is no doubt we are on a ride unlike anything we’ve seen. But this community will get through this — because like Mikey, this community is surrounded by love. And in the end, that’s about all any us can really hope for, isn’t it? Love.