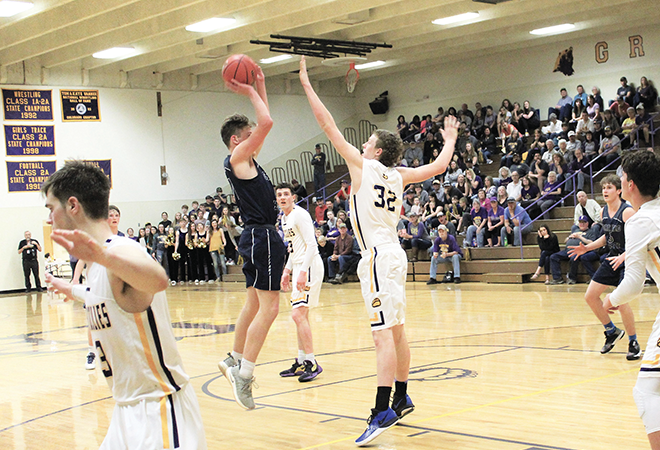 One could argue that, at the start of the basketball season this year, no one and I mean no one expected what eventually transpired. But, as the season continued, the energy built and about midway through the year, anyone who had been paying attention knew we were witnessing something special. And it was more than just their choice in pre-game music.

The first notion of the uniqueness of the program this year came during January and culminated the first week of February. The Titans came out of the holiday break with a big win and then kept on winning, including going to Center and coming back with a win, decimating Cotopaxi at home and then returning to the road the very next day to edge out an overtime win over Sargent.

“I think after the Telluride and Ridgway games when we came back from 10 points down and won, I got a sense that this team has a way of winning games,” says coach Brandin Hamilton. “I started to get a sense that we have a shot at regionals.”

The Titans did make it to regionals, winning their opening regional tournament game against Dayspring Christian Academy on Friday, March 6.

Dayspring Christian was a bit of a mystery at first for Crested Butte but in the days leading up to the game, Hamilton had pored through plenty of game film to get a sense of what lay ahead of his team.

“They looked good and played a style of defense that we hadn’t seen yet,” says Hamilton.

Dayspring Christian jumped out to an early lead on Crested Butte as the Titans struggled to unlock Dayspring’s defense and dealt with some new energy around a game with end-of-the-season repercussions.

“I think the idea of it being regionals and that if they lost they were done caused some jitters and it took a little while to adjust to the defense,” says Hamilton.

While foul trouble did cause some trouble for Crested Butte, they still managed to build a 24-19 lead by halftime. Dayspring remained in the hunt and nipping at the Titans’ heels in the third quarter but Crested Butte eventually took control for good in the fourth quarter to roll to the 61-52 win.

“When we went up by eight early in the fourth quarter we started to feel like we were in the driver’s seat,” says Hamilton.

The win sent the Titans to the regional finals to face Fowler on Saturday, March 7. While Fowler looked particularly strong in their regional semifinal win, Hamilton and the Titan players still had a good feeling about the match-up.

“Fowler didn’t really seem to bother the guys and knowing that we had played Sanford three times and won one and played tough in another had the boys pretty confident,” says Hamilton. “Plus we saw that they struggled with a 2-3 zone so we knew our zone would work.”

And, for most of the first half it did work for the Titans. With their 2-3 extended zone working and Crested Butte scoring off of their defense, they built an 18-10 lead by the start of the second quarter.

“It was giving them fits and they were turning the ball over and their coach was calling timeouts to try to settle things,” says Hamilton.

Unfortunately, one drawback to an aggressive 2-3 zone can be fouls and Crested Butte fell into foul trouble early. That eventually opened the door for Fowler to climb back in as they cut the Titans’ lead down to one point by the half.

“We got into foul trouble early and that was a big part of why Fowler was able to stay with us in the first half,” says Hamilton.

Some adjustments by Fowler coupled with Crested Butte foul trouble continued to prove challenging for the Titans. They remained in the hunt through the third quarter and started clicking again in the fourth quarter but shots were missing the mark.

“We got the looks we wanted and some really good shots. They just weren’t dropping when we needed them,” says Hamilton.

Eventually, Fowler started to pull away using the free throw line to their advantage and ultimately edging out the 56-46 win over Crested Butte, ending the Titans’ season. Bacani and Wasinger led the team with 13 points each. In the end the Titans finished 18-5 on the season, Hamilton was named league coach of the year for the Southern Peaks league while Wasinger and Bacani were named first team all league and Alan Prieto and Carlos Franco named second team all league.

“The season just felt magical,” says Hamilton. “The way the team treated each other, the kind of games we were in. They never got down on each other no matter what and it was just a lot of fun. I was psyched for these guys.”

The season also marks a paradigm shift for the Titans as the very next day following the Fowler loss, the team was in the gym working on things and are already looking ahead to next year.

“It’s great seeing the way these guys hold themselves to a higher standard and to hold that standard moving forward,” says Hamilton.