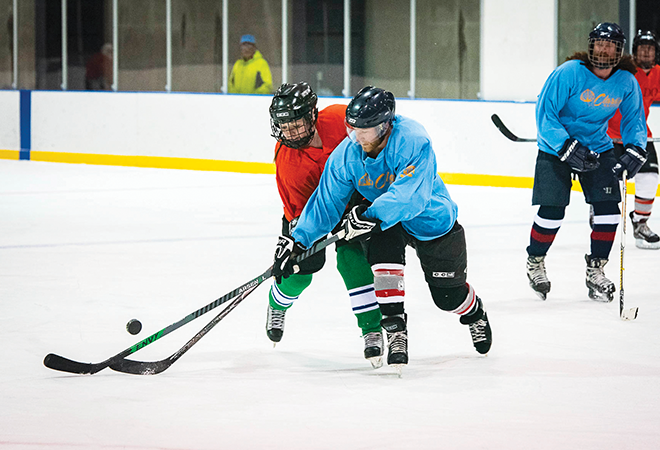 One and done until it’s done

Okay, now it’s for real. This climate change thing is starting to affect town league hockey. If shrinking glaciers, rising sea levels and deadly tornadoes in the middle of the night don’t change your mind, surely the melting ice sheet at Big Mine Ice Arena will.

Or not. Because while temperatures are climbing, the Parks and Rec ice crew have been diligent in their efforts and have kept the sheet solid.

Regardless, it was 40 degrees outside 20 minutes before the first playoff town league hockey game Monday, March 9 with the regular season cellar dwellers Clark’s Market and the Eldo set to square off in the Thunderdome-esque, single elimination post-season format.

Both benches were full and the Eldo had a solid fan base on hand for the opening game of the playoffs and the two teams did not disappoint those in attendance as they battled more like title contenders than cellar dwellers all three periods.

They both have the first key ingredient to a post-season run, quality goalies with Roan Perschke in net for Clark’s and Hunter Donleavey between the pipes for the Eldo. And both came through with key saves to start things off but Clark’s was pressing hard and while Donleavey did what he could, the constant barrage by Clark’s and the Eldo’s inability to clear the puck led to the first strike of the game as Jason Keener’s shot fell in front of the Eldo net and Will Nunez swatted it in.

Nicole Fuller and Tim Clark’s shifts on defense helped stem the Clark’s attack at times and Dylan Storz looked to ignite some offense for the Eldo but their efforts proved futile as Clark’s kept up the pressure. With Erin Kelly and John Rasmussen holding tight at the blue line, Clark’s tacked on a second goal in the final minute of the first period when Connor Sample fired a shot and Dakota Wiggins followed to stuff the rebound home.

Clark’s first period surge had the Eldo teetering on destruction but they’re grinders and never ones to go down without a fight. Brandon Muller has been their top scorer for the season and looked to take matters into his own hands. While his efforts on net were turned away, the chaos he created opened opportunities for teammates and Cody Sexe scored a pair of goals in a span of three minutes to tie the game, bringing the crowd to a feverish pitch.

The two goals brought Clark’s back into focus on the task at hand though and they responded with two more goals as Alex Banas sliced and diced his way through two zones to score. Thirty seconds later Wiggins fired a cross-ice pass to Jack Weise and Weise fired a shot past Donleavey for a 4-2 Clark’s lead.

Andrea Heilman stepped up next for the Eldo to try to pull them back into the game but her efforts were also stymied and Clark’s carried their two-goal advantage into the third period.

Additional Eldo players were inspired by Heilman’s effort in the third period as Kevin Vanhorn chased down loose pucks to set up chances in the slot and Paul Tillger worked hard in the neutral zone to keep the pressure on for the Eldo.

The teamwork made the dream work, at least for a little while, as Muller scored to pull the Eldo back to within one but Clark’s was determined to press through the next round of the playoffs and held on for the 4-3 win.

Town league playoffs will come to a climactic finish on Friday, March 13 with the championship game set for 7 p.m. at Big Mine Ice Arena.