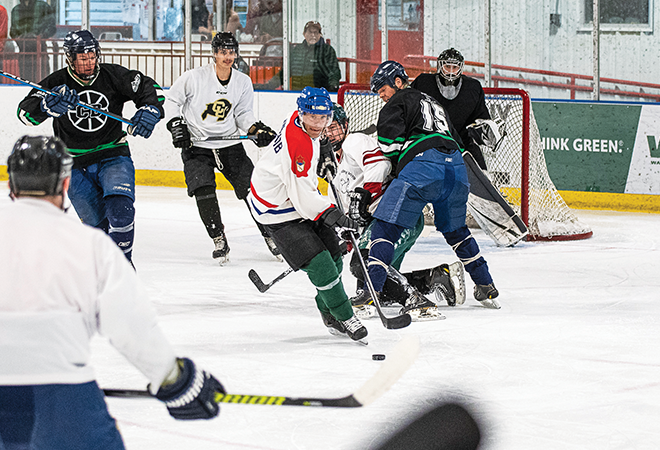 For 20-plus years, give or take five, men’s hockey teams from around Colorado have come to the Gunnison Valley for a shot at the Southwest Cup title and the coveted chalice created by Andy Bamberg, cheap, fast, good… pick two. And while over the years, the tournament has morphed into a local showcase of hockey talent with a random influx of out-of-town players, it’s always good to see some faster-paced play.

This year’s Southwest Cup tournament was just that as a bevy of Gunnison Valley players collected together to make an assortment of teams with the call put out to friends and former teammates on the Front Range to join in. One team, though, has been a mainstay of the Southwest Cup: the Crested Butte Storm. And, for the most part, their roster has remained relatively intact with a handful of players called upon to fill some gaps when needed. The Storm has also racked up numerous Southwest Cup titles over the years, including last year, and were on pace for another title this past weekend as they cruised through pool play to reach the finals on Sunday, March 8.

Their opponent, the Hartford Whalers, had caught the attention prior to and during the tournament though, as local skaters and Titans high school coaches Billy Watson, Shane McGuinness and Bob Piccaro formed a cohesive core with a number of Front Range players brought in by both Watson and McGuinness. Rumors swirled regarding the talent they called in for the tournament, including claims that two of them had played semi-pro hockey and a couple of others were recent graduates of Shattuck-St. Mary’s high school, the same high school hockey program of Sydney Crosby (briefly) and Jonathan Toews, as well as several other NHL players.

Regardless, they made a name for themselves on the ice as they cruised their way through pool play with an undefeated record to meet the Storm in the finals.

After a long weekend of hockey, play was noticeably slow to open the championship game but after the first several minutes of cat-and-mouse, the Storm ramped up the pace and started building momentum. The increase in pace made the difference as John Barron fired a shot from the blue line and Chris Mochulsky tipped it past the goalie for a 1-0 Storm lead.

It took the Whalers all of about 25 seconds to fix the situation though, and the two teams finished the first tied 1-1.

The Whalers looked to match wits with the Storm to open the second period but Storm goalie Mike Potts came up with a couple of key saves to deny the hotshot Hartford squad and Mike O’Loughlin started to find his way up and down the ice. O’Loughlin’s effort from neutral ice to behind the Whaler net was the spark as Katie Brawner saw the opportunity to push in front of the net and take a pass from O’Loughlin and slip it past the Whalers’ massive goalie for a 2-1 Storm lead.

That lead was, once again, short-lived as the Whalers responded 30 seconds later when Graham Barrett set up Watson on a 3 on 1 situation to tie the game again.

From then on it was all Whalers as McGuinness scored in the fourth minute of the third period for a 3-2 Whalers lead. Another odd man rush from the Whalers set up another goal 30 seconds later and the Whalers tacked on two more before the final horn for the 6-2 win and the Southwest Cup title.