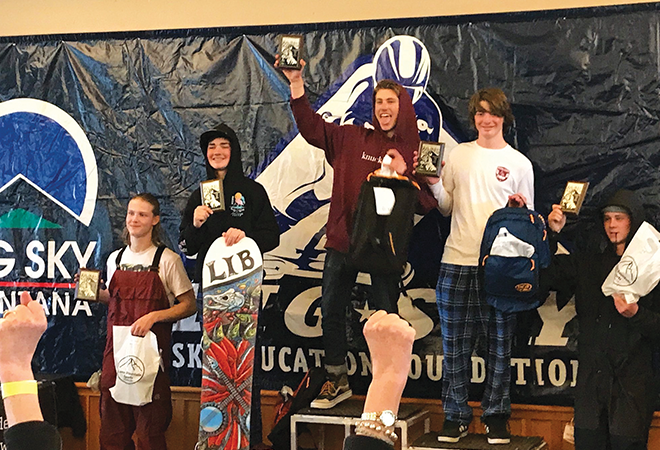 The chaos continues for the Crested Butte Mountain Sports Team (CBMST) athletes and they keep making the most of it as 12 athletes and three coaches made the trip to the IFSA 3-star Junior Freeride World Qualifier national event at Big Sky, Montana March 5-8 and came home with four podiums.

The finals for all ages were held in an area called Obsidian at Big Sky that offered plenty of cliffs and natural features for the athletes to show their ski technique as well as their comfort in the air.

“I was pretty stoked on all of that,” says head freeride coach Will Dujardin. “They’re putting the work in and the results are coming in.”

Dagan Schwartz continues to light up the scene among the male snowboarders ages 15-18. Schwartz won in Montana and is currently sitting at the top of the overall standings looking to punch his ticket to the IFSA North American (NORAMS) junior freeride championships in April.

“He was a contender last year for the overall and now as a senior even more so this year,” says Dujardin.

On the skier side of things, Avery Bernholtz looks to be getting her skis underneath her as she made the most of the Big Sky venue to finish in third place among the female skiers ages 15-18 to improve upon her overall standings.

Meanwhile the CBMST male skiers ages 15-18 had quite the showing with two reaching the podium and four finishing in the top 15 of a stacked field. Carson Hildebrandt was sitting in eighth place after the first run but posted the second highest score on his final run to jump into second place. Teammate Kye Matlock had the second highest scoring run to open things up and remained consistent on his second run to keep the podium in reach, finishing in third place. Nate Ball and Marko Alling cracked the top 15 coming in 12th and 13th place, respectively, while Owen Berv finished the weekend in 18th place and Gus Bullock rounded it out in 23rd out of a total of 42 skiers.

The competition circuit continues at a furious pace for the CBMST with a couple athletes in a good spot to make it to NORAMS, while others remain on the cusp and in need of some more quality results. Part of the team is headed to Snowbird, Utah this week for a national event, while several others remain at home to compete in a regional event in Crested Butte March 13-15.

From there athletes will mix in regional events at Breckenridge while a group of the older CBMST athletes are off to Squaw Valley.

“It’s crunch time for sure,” says Dujardin. “We’ve been able to build some momentum through February and the first week of March and we’re hoping to build on that the next couple of weeks. It’s the home stretch with NORAMS less than a month away.”