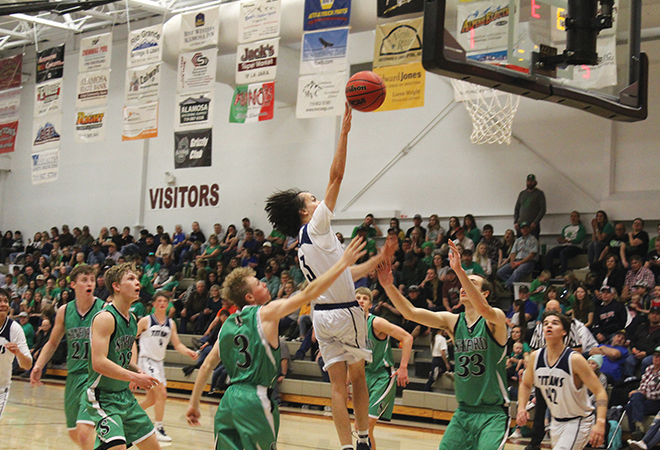 Two games away from the big show

While the Crested Butte Titans fell in the finals of the district tournament, they still advance in the post-season to the round of 32 and will face Dayspring Christian Academy at Fowler High School in the first round of the regional tournament on Friday, March 6 at 7 p.m. A win will then send them to the regional final on Saturday, March 7 at 2 p.m. and so on and so on. Suffice it to say, March Madness is on for the Titans for the first time in a long time.

The district tournament offered the Titans a look at the intensity of the post-season without the ramifications of a season-ending loss. Given that they had automatically qualified for the district semifinals, they were guaranteed a trip to regionals. Still, the Titans were there to play.

“You still wanted to have a good showing,” says coach Brandin Hamilton.

As soon as the Titans arrived at Alamosa High School for their first district game against the Del Norte Tigers on Friday, February 28, they found exactly what they were hoping for.

“We showed up and just saw the fans filing into the gym and it just got louder and hotter,” explains Hamilton. “The kids ate it up and did what they’ve done all year, they brought their own spirit to the game.”

While the Titans appeared in control of the game the first three quarters, they struggled to gain any sizeable gap on Del Norte as the Tigers’ top shooter kept Del Norte close.

“They have a shooter that is either on or off and he was on that night,” says Hamilton. “He hit five three-pointers and that kept it a game.”

Ultimately though, the constant harassment of Crested Butte’s pressure zone defense wore Del Norte down and sparked an offensive run for the Titans as they built a 10-point lead with four minutes left.

But, as the Titans found out a week ago in Ouray, no lead is safe so they brought that experience into the district game to keep their cushion in place to win 58-44.

“After that Ouray game, we knew how to handle the situation,” says Hamilton.

The Titans returned to the “hot house” Alamosa gym the next evening to face the Sanford Indians in the district finals. Sanford handed Crested Butte a lopsided loss earlier in the regular season but Crested Butte exacted revenge just three weeks ago, so the stage was set for a heavyweight bout. Over the course of the two previous showdowns, Hamilton and the Titans learned a few things and Hamilton covered those heading into the game.

“I just reminded them what we did that made us successful when we beat them and just made some small adjustments,” says Hamilton.

What ensued was everything a fan could hope for out of a district title game as the two teams went toe-to-toe for nearly the entire game with defense setting the tone at both ends of the floor.

Crested Butte got into foul trouble early on but the bench players did their jobs and the Titans were down just 15-13 at halftime. The two teams were then tied up in the fourth quarter but foul trouble reared its ugly head once again for Crested Butte.

“We had to manage that and that disrupts what we do on offense for sure,” says Hamilton.

Sanford eventually scored back-to-back baskets to build a slim four-point lead and managed to hold off Crested Butte and hand them a 37-31 loss.

“We got some looks at the end but missed some big shots,” says Hamilton. “We didn’t do anything wrong, Sanford is just tough. As a coach, I was so impressed with how the players handled the game throughout. They handled it with poise all the way to the end and they were pumped on the experience as a whole.”