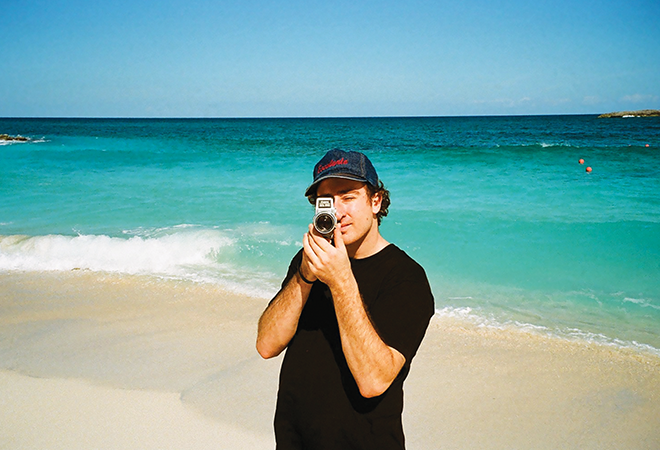 Forrest Smith has the distinction of being the first and only offspring of two Red Ladies, Jennifer Rose and Bill Smith, his father being the first male given the honor of the title. Born and raised in Crested Butte, Forrest is currently living in New York City, but he feels Crested Butte is still home. “I loved growing up here. It was hard at times because of how secluded it is but it’s also one of the main upsides to a place like this. You have great access to the outdoors and the community is so small that there’s a sense of watching out for each other. People care for each other, which I think is unique.”

Growing up in town during the early 2000s, Forrest had typical Crested Butte parents, both massage therapists, who were, he says, “Big on getting me outside. My dad and I were big on hiking fourteeners,” and the two bagged 23 of them before Forrest was 10 years old. Running for his cross country school team and Nordic skiing competitively with the club team were his main activities.

He graduated from Crested Butte Community School (CBCS) in 2014, “with no clue as to what I wanted to do except I knew I wanted to run.” He enrolled at Willamette University in Salem, Oregon, a small liberal arts college that he chose mostly for its excellent running team and academics. Although the running team was really good, Forrest quit after his freshman year because, he says, “I felt like long-term running wasn’t going to be a profession that brought a lot into my life,” so he continued his education in civic communication and media. “It’s more or less a rhetoric degree that looks at the way media influences the ways that communication happens in a public sphere.”

Simultaneously, he became interested in photography of outdoor spaces. “I had this moment where I decided that if I was going to be happy with any job, I’d have to have four things: I want to be outside, be creative, be able to connect to people and be able to travel. That’s when I started photography as an option.” With those goals, he graduated in 2018, set on being a photographer.

He began freelancing for commercial clients. “I’ve done jobs from Highland Park Whiskey and Bud Lite and Honda Canada to people and outdoor wear brands. A lot of the connection was having a social media presence and having the visibility that comes with that.”

Forrest began using Instagram as a platform to showcase his work in 2016. “That’s when I really started taking photography seriously and built a skill set. This day and age is really interesting with digital platforms because attention is basically crowd-sourced—instead of having one or two TV channels or radio stations, you have these platforms where anybody can become famous. I was able to put out my photography work and gain some traction on the internet.”

A combination of great timing along with his desirable style of photography clicked. “People like to follow accounts that portray adventure and a carefree life, so it’s a bit of a glimpse into that,” he explains, so it makes sense that most of his 320,000 followers are from NYC, just on Instagram alone.

His work, he says, is called influencer work. “Because I have such a large amount of attention on my page, brands will treat me as a media source so I’ll partner with companies who want to be involved in the outdoor adventure space. Most of the people attention is focused on social media rather than TV these days so instead of paying a million dollars (for TV ads), companies will use influencers to market their products or experiences—for example, an outdoor company that wants to market a new product,” Forrest explains.

In addition to being an influencer, Forrest continues his love of photography professionally as a commercial photographer for both printed media and internet. He says people are moving more toward the digital world.

“I think the present printed media is eclectic. It’s never going to be as popular as it once was but people still want printed books of photos. People do really value the physicality of items and information, from my perspective. I can pick up my phone and access the world instantaneously. Apps like Instagram and Facebook are very crucial in the media landscape. They’re super accessible but I hope things like books never go away.”

Forrest feels that his situation is a blessing that’s allowed him to design his life and create his own path, since he can work remotely as well as travel. “I get to visit these incredible locations. Most of my projects take me around the world. Last year alone I was able to travel to New Zealand, Canada, Hawaii, Laos, Bangkok, Mexico and to Portland for several projects.” This summer, he took to the road, living out of his car while working on a project photographing the American West for a book he’s writing.

While in New York, Forrest met the owner of Thought Catalog, the publishing company that’s publishing his proposed photo book. “I work for an agent that works out of his office. He found out about my work and was impressed with it and he had an idea of putting a book together.”

Forrest’s car camping started in Arizona this summer and continued west, rounding back home eventually to Crested Butte. The book will be a collection of photo projects and essays he’s been working on. “It’s been a really awesome journey. The surprising thing for me is how isolating traveling can be. I think there’s value in both home and travel. A community that supports you is always going to be the most important thing but I also think that travel diversifies your perspective and understanding of the world.”

He was also in Laos at Mandalao Elephant Conservation, a sanctuary that rescues abused elephants from riding and logging camps. “We were there to tell their story and spread awareness for their cause. We got to hang out with the elephants for a whole week. They’re so intelligent, kind and gentle too,” he learned from his stay there.

Forrest has his finger on the pulse of what’s to come, but he says, “I think, as a photographer, people are always going to need images in some shape or form, whether that’s for documentation of something, or marketing, or just to remember how things were, so I want to continue documenting. I’m not sure what space that’s going to be in, whether music or outdoors. I don’t see social media going away anytime soon. I think it’s getting more ingrained into our lives.”

He notes that on platforms like Instagram, anyone can be a photographer and create unique images. “Almost anybody can take a nice photo now with the technology at hand. The best way to impact anybody is to have a unique perspective and be making things with a reason and intention. This wouldn’t have been possible 19 years ago because platforms like Instagram, YouTube, Facebook and Twitter didn’t exist. The media platforms are really interesting because they’re each geared toward a specific need and want from society. YouTube is taking over TV and their stars are arguably as big as, if not bigger than, TV stars.”

He explains that it all depends on demographics and algorithms. “If you put out enough content and you know how to work with the algorithms, you can increase your visibility.” He says Facebook demographics are the 55-year-olds and up age bracket, whereas Instagram is very youth-focused. He also feels that TikTok is the next big thing. “I think these platforms are going to be around forever. I don’t see them going away.”

Forrest plans to return to Crested Butte and hopefully spend the summer this year. “I wish things in town could stay the same. There’s always good ties that you look back at fondly and the thing is, growth is going to happen, you just have to make sure it’s healthy growth.” Even with all his travels, Forrest would love to live here again someday. “I’d love to live in Crested Butte. I plan on coming back but right now I’m too young and wild, and there’s so much world to see. But this is home and always will be. This is like the roots of the tree.”