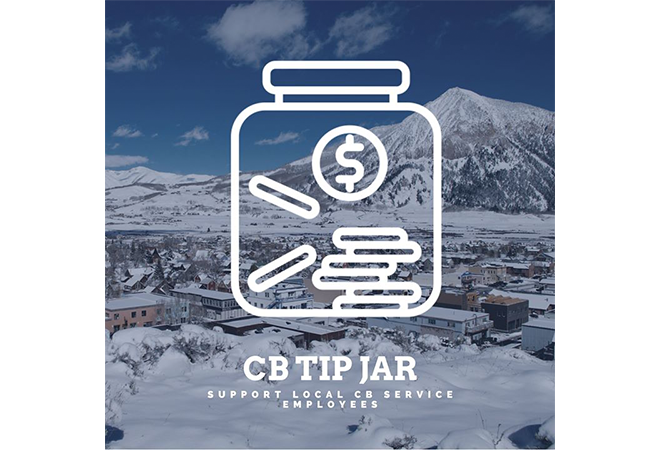 When the Spencer family started up the CB Tip Jar online, they did so knowing that the community would give to its resident service workers but they didn’t realize just how generous and how much of a success it would be.

“I would love for the community to know what a huge success this effort has been because of the amazing participation from everyone, including locals, visitors and second homeowners. We sent tips to more than 200 people for two weeks and the tips ranged from $70 to $270 for the first week and ranged from $60 to $254 for the second week,” Haden Spencer says and adds, “In the end, we collected and distributed $47,030.43.” The range was due to some people having two jobs and having lots of support for the specific restaurant or bar’s tip jar.

“What an awesome community of people who love Crested Butte. We would have loved to continue the tip jar effort but are aware that the generous donations have made a difference and that there are many organizations and other efforts also needing support,” Haden says.

The recipients of the fundraiser were grateful, if a bit surprised by, the outpouring of support. “A few people have reached out in tears when they received the money and for some, it came just in time to help pay their rent. We get messages all the time, along with a few cute photos of appreciative workers’ happy families. There are photos of their checks. Some sent photo memes and cartoons and all with big thank you messages,” Haden says.

“It’s been so sweet to have the connection to community and my biggest takeaway is the realization of the importance of community. I think it’s important to recognize community both local and distant, throughout the United States because we’re so connected now, even if we’re not standing on Elk Avenue,” Haden says from her Austin home, where they returned to last week. “We’re hoping to be back to Crested Butte in June and stay through October.”

Although the website is still up, the donation function is now off. “The tip jars have been removed,” Haden says, because they felt, “There are other organizations who need the help and there are lots of ways to still help. We want people who have the ability to financially support to be able to help other efforts.”

She continues, “It was so heartwarming to see the level of participation because every person helped create this success. It’s such a joy, and there’s a great relationship between giving and receiving. For us, it’s been a real joy to do this. We’re being filled up on the inside with connection and great stories. I think we did chip away at rent or groceries for some, and the aim was to help a little. I feel like we’ve helped. I’m hopeful seeing all these other great efforts. We’d like to give our sincere appreciation for every single person who donated. It all added up!”