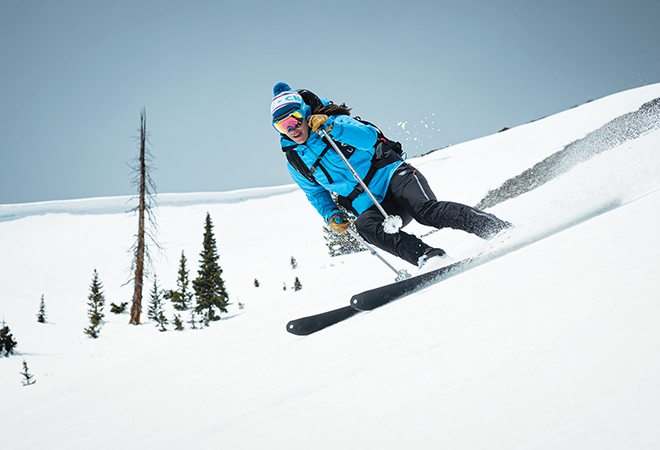 We are human after all

In this strange time where we wake up each morning hoping this pandemic might be just a bad dream—but isn’t—we in this valley find ourselves on the front lines of the U.S. COVID-19 outbreak. And thanks to some quick and dramatic action, we are now walking a plateau instead of climbing a rising curve. That’s good news. We are starting to look ahead with hope instead of fear.

To date, three of our neighbors have died from COVID-19 and that casts a depth of sadness understood by small communities, where people know or know of almost everyone living here. That pall is on top of the expected angst produced by a shutdown and so many unknowns about what lies ahead. But people are moving beyond the panic and the “let’s fall in line and flatten the curve” phase and now want to imagine a future with some brightness. It might be time for the next phase to be envisioned and discussed. In the meantime, we are all doing what it takes to keep the curve flat. We want to continue doing what is right to protect our friends and neighbors. We are human after all.

In any crisis, there is humanity and light. People here lift one another up in tough times.

There are the restaurant owners preparing food and handing it out to those who might not be able to afford groceries for their family. There is the Gunnison Country Food Pantry that, in coordination with local businesses and non-profits, is serving more of our residents at both ends of the valley than ever before.

There are the people who set up virtual assistance portals like the CB Tip Jar, CB Cleaners in Need and Local Love that have raised thousands of dollars. There are people delivering food to those who are vulnerable and not leaving their homes. After what might have been a frenzy of activity, the people using public lands now seem to be respecting the rules, both at the parking lots and as they cross paths in the backcountry. People are dancing to virtual Soul Trains and lip-synching or participating in online open mike events. Practitioners are doing yoga and Pilates in front of computer screens set up in their living rooms. Virtual happy hours are the norm. Everyone is doing their best to stay sane. Honestly, the easiest way to feel sane might be to watch “Tiger King”—those people are crazy. It will make you feel normal no matter how weird you really are.

People are adjusting to a new normal. With gatherings prohibited, some have discovered the “enhance my appearance” button in the Zoom settings while others forget to put on their pants and shut off their video during business meetings. Everyone seems to have found the palm tree background.

There are the very occasional spontaneous street gatherings, whether on Elk Avenue or in the various neighborhoods, where everyone is at least 10 feet away from one another but talking to friends in person and not over a screen. No one is sharing guacamole or passing a blunt but it is nice to interact (sort of) with friends. We are human after all.

Local elected officials do what they do best: attend a lot of meetings. The 8:30 in the morning strategy meeting, the 2:30 in the afternoon overview, the 10 a.m. or noon or 4 o’clock subcommittee conference calls. They are talking about the health measures and how to start planning for an economic recovery in a valley that relies on visitors. Some of those visitors were extremely offended by a recent public health order and accompanying messaging that told them to leave and not come back (for a while).

That led to quite the kerfuffle.

The team that issued the order and accompanying information was, shall we say, less than diplomatic in their messaging. There were threats of jail and big fines and postcards mailed to primary homes all across the country that might as well have had a middle finger in the background. That set off second homeowners, many who were here before the outbreak roared into the valley and had no comfort in being told they were being forced to leave and head back to cities where the virus was just ramping up.

As we know, many of our second homeowner community members are from Texas and many are well connected in the political and business realms of the Lone Star State. So they called upon a friend who happened to be the attorney general of Texas. He wrote what looked like a legal brief (but might as well have been a letter to the editor on official letterhead) and sent it to the country bumpkin county in the middle of Colorado. The attorney general has visited friends in Crested Butte and had even been in the valley at the end of what turned out to be the abbreviated ski season. Contrary to rumors, he does not own a place here.

Anyway, this set up a few days of good entertainment as the county attorney’s office took 24 hours and responded like they were confronted with a pop quiz in law school and bludgeoned the arguments made by Texas’ top lawyer. Then the Colorado attorney general borrowed a colloquialism and defended Gunnison County’s decisions in a press release with the headline “Don’t Mess with Colorado.”

The bottom line was that the spat generated publicity and the local public health director received hundreds of exemption requests that she analyzed, granting most. She also amended the public health order to be more reflective of the situation on the ground. The county basically issued an apology on how the whole the thing was handled. The kerfuffle between locals and second homeowners, I believe, will be seen as a blip in a historical stressful time and we’ll be pulling together again, hopefully sooner rather than later.

Local businesses are applying for federal assistance funds and some are getting frustrated. Others are getting money. What should have been a super-simple process to get money to businesses and employees is apparently more complicated than it needs to be. Ashley UpChurch at the Crested Butte/Mt. Crested Butte Chamber of Commerce says she has heard from some local businesses that have received money from both the Economic Injury Disaster Loan program and the Paycheck Protection Program. That’s good news.

Meanwhile Gunnison County ranks tenth in the state as far as unemployment filings made this March as a percent of claims per employed workers. In 2019, eight people on average from Gunnison County filed for unemployment each week in March. But based on preliminary numbers from the Colorado Department of Labor and Employment, that number was blown out of the water last month, as 175 Gunnison County workers applied the week of March 21 and another 437 put in unemployment applications the last week of March.

Some of those who have successfully filed for unemployment are seeing a $600 per week federal bonus and are making more than they would have during any off-season…or frankly, even the on-season.

Black market opportunities are starting to pop up. If you know how to color hair I would guess you could make a fortune about now as we head into week five of the stay at home order. Put on the hazmat suit and meet your desperate client with Venmo in the back alley for some light icy blonde vanilla love. Know the secret place to catch rainbows before the rivers get muddy? You can make some dough. Don’t want to stand along Elk Avenue in a mask for an hour to get a package from the post office? Someone might be industrious enough to wait there for you for a fee. The same dude will go by and grab an emergency pizza kit so you won’t be spotted on Facebook Live grabbing a meal when you don’t really “need” it.

As the Crested Butte Community School spring break starts next week, school district superintendent Leslie Nichols sent a message to parents asking them to explore our backyard instead of heading out of the county. “We’ve asked others not to come to our communities right now. Thanks for showing other communities the same respect we are expecting of them,” she advised.

There is some local worry that Donald is using this pandemic to basically destroy the world. As Donald rolls back environmental regulations that ultimately make the air more polluted and water dirtier and as he opens up drilling everywhere, including around Paonia, while trying to shut down the post office (no mail-in ballots?), the people wonder what the world will look like when they can legally leave their house. Will there be any inspectors general left to watch over public money and actions? Or will Jared Kushner simply be in charge of everything when we wake up?

During Monday’s town hall meeting, county officials couldn’t give any definitive timeline about when all this might end. Fair. There are still so many unknowns about how this COVID-19 works and might reappear. I don’t think staying under current restrictions while waiting for everyone to get the vaccine that’s not yet invented is practical. Local officials promise there will be some easing but the old normal is a loooong ways off. That’s where offering hope cannot be discounted. People will do what’s right for a while—and it has worked tremendously well thus far and needs to continue—but when they begin to truly go stir-crazy, people will ultimately do what’s comfortable no matter the consequences. We are human after all and humans need hope.

So there has to be a path forward even with the understanding there will be “twists and turns” as the path unfolds. No one expects things to return to the way they were in June 2019. My only fear is that the new reality will be more like what we see in “Tiger King” and Joe Exotic is simply too crazy even for most of us up here in the mountains.

One final note as we head into spring, which can be hard for many people no matter what: The Center for Mental Health has a free talk line that is open 24 hours per day at (970) 252-6220. Use it if you need it. We are human after all.