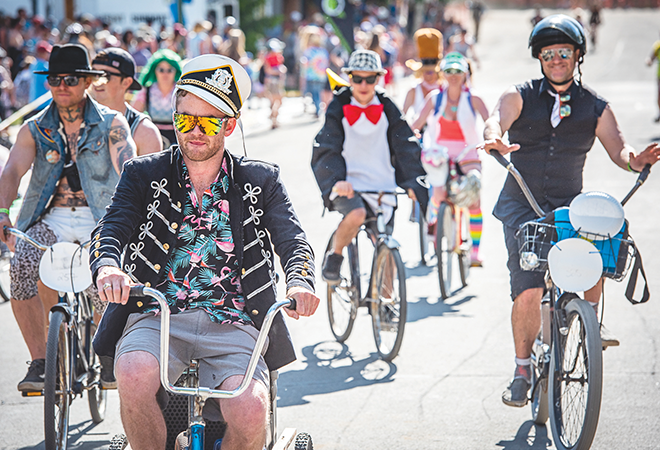 The big events that draw in the crowds during a Crested Butte summer will not happen this year—at least not like they have in previous summers. Under the coronavirus crisis, the spread of the virus appears maximized in large groups, so state and county health orders are limiting the numbers permitted at such events. Public Health director Joni Reynolds expects gatherings to be limited to no more than 50 people this summer and that essentially will prohibit events like the Crested Butte Fourth of July festivities, including the parade and fireworks.

Organizers of probably the two biggest events of a Crested Butte summer, the Fourth of July and the Crested Butte Arts Festival, announced the decision last week to cancel for the coming summer. Many other event organizers are following suit. The weekly Monday evening Alpenglow concerts and the Wednesday evening Music on the Mountain have both been cancelled for 2020. The Crested Butte Food and Wine Festival, the Growler bike race in Gunnison, the Public Policy Forum, the Paragon People’s Fair, the Grin-and-Bear-It race and the Gothic to Crested Butte 1/3 Marathon have made the decision to not hold their events this summer.

Other events are pivoting to reduce the size of their events or hop onto the virtual party idea. “Our 18th annual Black and White Ball is scheduled for Sunday, June 28. Museum board and staff are reimagining the event with a virtual party, online raffle and other creative ways for us to connect as a community,” explained Crested Butte Mountain Heritage Museum executive director Shelley Popke. “Our board is meeting this week to discuss our plans, so stay tuned for more details.”

Even the Crested Butte Arts Festival is going to try an online angle. Festival director Chelsea Dalporto-McDowell said this week the board will present an alternative from the Elk Avenue festival to still bring artists and art lovers together. It will include an online art auction hosted on a virtual platform featuring the artwork of Crested Butte Arts Festival juried artists. Proceeds from the online event will go to support the juried artists and further CBAF’s mission in the community. “We want to re-imagine our beloved festival as an opportunity to support and engage artists and patrons during a time when art is possibly needed now more than ever before,” she said.

The Adaptive Sports’ Crested Butte Open will also hold a “virtual” auction event that kicks off the last week of July, and will not hold its traditional gathering in Lacy’s Arena. Meanwhile, Cattlemen’s Days organizers are trying to brainstorm ideas that would allow some form of the rodeo and 4-H exhibits and auctions to occur in July.

The Crested Butte Wildflower Festival is taking registration with the idea of a limited event. “We’re planning a scaled-down festival with 61 events, versus 204 last year,” explained the festival’s Tom Zeiner. “Events are limited to eight participants to allow for a good hike experience while allowing appropriate distancing. We decided to cancel any events that required catering or rides in a common vehicle and are asking participants to provide their own transportation and lunch. We’ve also staggered start times to allow groups to meet individually and depart before the next group arrives. We’ll have hand sanitizer and masks available at Festival headquarters (The Depot). To encourage signups in the current circumstances we’re offering a no questions money-back guarantee. This entails some risk on our part, but we’ve had strong registrations so far and, knowing some participants will change their plans, we hope to fill the events we’re offering and provide a great experience. Knowing that some regulars won’t be able to make it to town in person, we’re working on ideas for virtual events to share the fun of summer on the trail.”

The Crested Butte Land Trust holds a summer gala scheduled for August and CBLT executive director Noel Durant said they are trying to figure out how to make it work. “We’re still in the final decision-making process for [hosting] our gala this year, though it is looking increasingly challenging to pull off an event of this scale this year,” he explained. “We are moving forward with the Caddis Cup fly fishing tournament in July. The event is based on angler-volunteer guide pairs spending a day on the river but are working out what our kick-off and awards events will look like.”

Flauschink, which takes place the final weekend of the ski season, didn’t have its polka or parade in April, but a new royal king and queen will be announced this Friday on KBUT during Andrew Hadley’s Friday Night Fish Fry show.

Other events have not been cancelled but rather have been postponed in the hope that the health orders could be loosened in the future. The popular Chainless Race down Kebler Pass Road and the Bridges of the Butte, normally held at the start of summer, are now tentatively slated for August 28 and August 29.

The Nordic Center’s Summer Grand Traverse events are somewhat in limbo but Crested Butte Nordic executive director Christie Hicks remains optimistic. “We are currently crafting a plan that will allow us to host this endurance event in a way that minimizes risks to all racers, while adhering to all state and county regulations. We don’t know exactly what those will be at this point, but we have enough information now to make some predictions and draft our application to the county,” she said.

“The Summer Grand Traverse is a one-way race, and the majority of the course is on wide dirt roads,” Hicks continued. “We are hopeful that we can make adjustments to our operating plan in order to host a successful race. We will only hold this race if we can protect the health and well-being of our athletes, volunteers, spectators and staff, as well as the host communities of Crested Butte and Aspen. We are certainly not guaranteed a race at this time, but we are working on our application, to both counties, with our plan to host the event Labor Day weekend, as scheduled.”

The Crested Butte Film Festival doesn’t take place until late September but it does sponsor a monthly film. It hopes to make a decision on how to handle 2020 next week. Film fest programming director Michael Brody said they are currently looking at all possibilities.

“Overall, the feeling about having to cancel these great events is disappointment,” said Crested Butte-Mt. Crested Butte Chamber of Commerce executive director Ashley UpChurch. “It’s disappointing just talking about it. We created new business subgroups dealing with events and the word from the county is that the maximum number of people that will be likely allowed to gather this summer is 50. That is not just possible for something like the July Fourth parade and Arts Fest.”

It’s not like the state is allowing big events in other Colorado resorts, so UpChurch sees at least one silver lining. “Some places depend on big summer events for most of their summer economy, and we don’t,” she said. “The big local events certainly attract people here and they are a big part of our economy but we get so many people who come here for the backcountry opportunities. They like to hike or bike and just hang out in the towns. We are lucky our whole economy is not reliant on these big summer events. We have other things people like about the area so I think that puts us in a better position than some other places.”

The other advantage UpChurch sees with attracting tourists to the valley this summer is the message that this is a safe place for people to visit. “The community has been really good about flattening the spread of the virus after the outbreak last March. So we need to keep up the measures that worked so well like social distancing so we don’t get a second wave,” she recommended. “We don’t want our family and friends to go through that again. Businesses have been really good about figuring out safe ways to serve their customers. The business owners have been encouraging each other to follow and promote the safety measures. Visitors need to feel safe, along with employees of the businesses. That is a top priority this summer and will go a long way to having a successful season under these circumstances.”

Messaging the outdoors and safety for visitors

As the weather warms up and it starts to look more like summer, the chamber is starting to field calls from potential tourists looking to visit the valley. They want to know what will be open and the timing of when they are allowed to come. “We are sending them the message they will be welcomed with open arms once the state allows them to visit,” explained UpChurch. “We are reassuring visitors that we are reopening as safely as possible and right now they will be permitted to travel here starting May 27. We hope the governor keeps that date but we should know more in a week or so.”

The chamber is helping to coordinate a business information hub that can be accessed on its website. The site gives the current operating hours and parameters of open businesses in the community.

“We are lucky this place is about more than festivals. I can’t wait to go back to some of the big events next summer but in the meantime we have to get creative or wait until it is safe for all of us. I’m hopeful that with the cooperation of the businesses and the community, as well as the various subgroup sector plans we have developed, that the valley can survive this—both economically and health-wise,” UpChurch concluded.