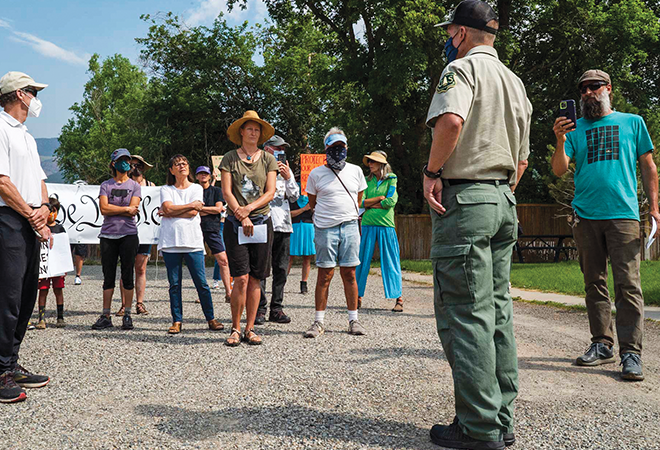 More than 50 people gathered at the Paonia Ranger District office on Tuesday morning, June 16, to demand more information regarding what conservation groups are calling illegal road building in the Sunset Roadless Area of the Gunnison National Forest.

Approximately one mile of new road is reported to have been punched in by Mountain Coal Company—a subsidiary of Arch Coal—despite a November 2019 federal ruling barring coal mine expansion.

Despite the populous mid-day, mid-week, mid-pandemic showing of concerned citizens, demonstrators did not receive the answers they sought from the questions they asked. Citing ongoing litigation between the Forest Service and multiple conservation groups, Paonia District ranger Levi Broyles was not able to answer most questions he fielded throughout the morning.

“At this point, I’m not allowed to discuss anything,” he said. “At the point this lawsuit is resolved, and remedies assigned, all of that will be public information.”

That reluctance did not quiet the citizens. “This is our public land. We are the public. We want to know why it’s been criminally vandalized. We want to know what you, as the stewards of the lands, are doing to prevent further destruction,” demanded North Fork Valley resident Timber Moreland. “This place is an invaluable gem. There [are] not many roadless areas left in the world. That mine is going to give them two more years of for-profit, fossil fuel extraction.”

North Fork Valley resident Craigor Clark asked, “What’s our action that we can take to stop this grievance?”

That was not the response the crowd was looking for, and the idea of stopping the bulldozers began to take root.

Broyles did verify that the roads are being built to vent methane from the future expansion of the underground mine directly into the atmosphere. Venting is done to reduce the likelihood of an explosion in the mine. Methane is a greenhouse gas that the EPA says is 25 times more harmful than carbon dioxide, and the West Elk Mine is Colorado’s largest source of industrial methane pollution.

“If they’re allowed to get away with this, it sets a real precedent that there’s a federal law, and you can just break it, and be absolved of it,” declared Moreland, before the nearly hour-long demonstration ended.