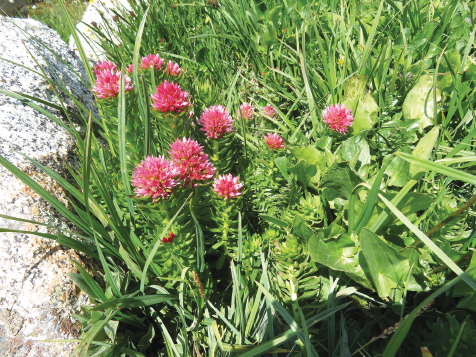 Succulents are favorite plants for gardeners, with their fleshy leaves in eye-catching geometric arrangements. You may have some on your window at home. Jade plant is a common succulent. They’re easy to grow and add color and texture to life!

But where are these strange plants from? Many are found in South Africa but they can be found from the coast to the alpine, and we have three natives in the area. They’re as tough a plant family as you can find.

They’re favorite plants for hikers in the Gunnison Valley since they add bright color in unexpected places. They’re in the Crassulaceae family, commonly known as Stonecrops, and live in distinct places. The most common in Colorado is simply called Stonecrop (Sedum lanceolata) and is found growing from tiny crevices in rocks. Its leaves are like little puffy spears and can change from pale green to deep red through the seasons. For much of the early season these colorful leaves are all you see but in mid-summer the yellow star-shaped flowers emerge adding bright color to the rockscape. They’re small plants, up to eight inches tall, and can be spotted down at Hartman Rocks and up to alpine heights.

The other two Stonecrops are the royalty of the family—King’s Crown and Queen’s Crown. Their genus is Rhodiola, and they’re familiar sights to anyone hiking near streams in the high country. Both are showy plants with flat, succulent leaves. King’s Crown (R. integrifolia) is capped with a head of small dark red flowers. Several stalks often join together to make a bouquet of showy growth. You can find them along streambanks and in wetlands, but also in rock crevices similar to Stonecrop’s habitat.

Queen’s Crown (R. rhodantha) is also known as Rose Crown, which is descriptive of its pink flower heads. It looks much like King’s Crown except for the flower color and its narrow leaves. It likes to keep its feet wet and will be found around water more often than King’s Crown. Both of these gems can be found from montane to alpine environments.

These plants are just emerging from their winter’s rest, so be on the lookout as you’re hiking!