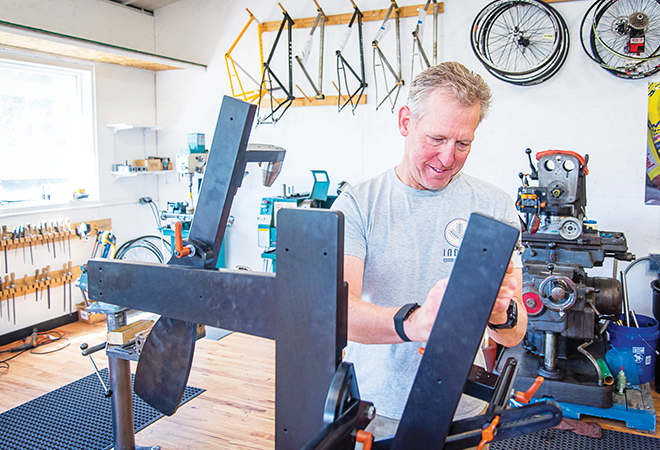 Granted, the Gunnison Valley is best known as a haven for some of the best and most extensive mountain biking in the nation, but that didn’t stop Scott Schofield from setting up his custom road and gravel bike building business right here in Crested Butte. Not to mention, there is a mountain pass in the area with the same name.

Schofield spent 20 years in Virginia working on the retail end of the biking industry including a short stint with Trek. It was toward the end of that 20-year span that he got the urge to change things up a bit.

“I got to a roadblock in retail and wanted to open my own bike shop but that wasn’t possible in the Virginia area for a number of reasons,” says Schofield. “But I love bikes and always wanted to be around bikes.”

Around the same time, he decided that with so many years fitting people on bikes, maybe it was time to try building frames. He jumped into the fray, taking a couple of frame building classes, and then decided, “I’ll give it a go.”

Schofield moved to Tulsa, Oklahoma and in 2013 opened his custom frame building business, Indigo Custom Cycles. It is a name derived from two things, his love for the actual color and a line in the Grateful Dead song, “Standing On the Moon.”

“I was always a self-starter, a self-motivator and always loved putting things together,” explains Schofield. “I also self-taught myself a lot of the stuff.”

And while during his stint in the retail world selling and fitting road bikes for customers he saw frames go from steel, to aluminum and then to carbon, he opted to stick with steel for his frames.

He also found through his retail experience that while the bigger companies can come close to getting a decent fit for riders, there still lacked some small tweaks and small stylings that he could incorporate into his frames to set Indigo Custom Bicycles apart.

“I still use a traditional design, but with modern twists,” says Schofield. “I’ve always been tuned into making sure people are fit properly. I like to dial it in so the rider has a nice fit and the bike handles well. Make it so you want to ride because the bike feels really good beneath you.”

Business took off for Schofield while in Tulsa relying on quality craftsmanship, word of mouth and Instagram.

“I haven’t had anybody return one,” he says.

He continued to build for local riders and a women’s bike team and soon was designing and shipping his bikes for people around the country, and beyond, including sending one custom-built bike to Guam.

He and his wife then eventually moved to Crested Butte in 2018 and he has set up shop in the Riverland industrial district in a well-lit, and well-kept, frame building shop complete with an adjustable stationary bike set up to do in-person fittings before turning to his computer for the CAD design stage.

“I always had in the back of my mind that I wanted to move to Colorado some day,” says Schofield.

The process from the initial discussion to completion of the frame build takes three to four weeks. It’s then sent off to the painter for a custom paint job, which Schofield will help decide upon, as well as decisions about components. And while fittings in person for out-of-state orders are nearly impossible, Schofield can connect his customers with quality bike fitters in their area to do the sizing. Or, he can send them a “fit guide,” explaining how to do proper measurements at home.

All told, it takes anywhere from six to eight weeks, somewhat dependent on his painter’s schedule, from design to first ride for his customers and Schofield makes a point of building one bike at a time to give the bike, and his customer, his full attention.

“Any more than that and it can feel like herding cats,” says Schofield.

If there’s ever a lull, Schofield takes the opportunity to build a demo bike or a prototype as well as fulfilling his urge for philanthropy.

“Once or twice a year I build a bike for a charity foundation,” says Schofield. “I like to give back when I can.”

In fact, he is in the very preliminary stages of working with Al Smith and Living Journeys to potentially build a gravel bike named the Coffee Grinder.

“We’ll see what happens,” says Schofield. “If it does, we will trick it out.”

Currently, he has only one road frame riding in the valley but invites people to reach out to get the discussion going on either a custom road frame or a gravel bike frame.

“The gravel bikes work great on the roads around here and can even handle some of the tamer mountain bike trails,” says Schofield.

And while the area is mountain bike-centric, he has no interest in jumping into custom mountain bike frame building.

“Gravel and road bikes are right in my wheelhouse,” says Schofield. “I feel that because you move around so much more on a mountain bike, they don’t lend themselves as much to custom design. And around here especially, you want full suspension and that’s a whole different beast.”

With a steady output of 10 to 12 bikes per year and one currently in the design phase, Schofield has hit his stride of staying busy while still getting to ride.

“I get to manage myself—I enjoy it,” explains Schofield. “I can go ride in the morning if I want and then come into the shop and get working.”

To take a look at what Schofield can do with steel and his vast experience with bikes, check out indigocustom.com.