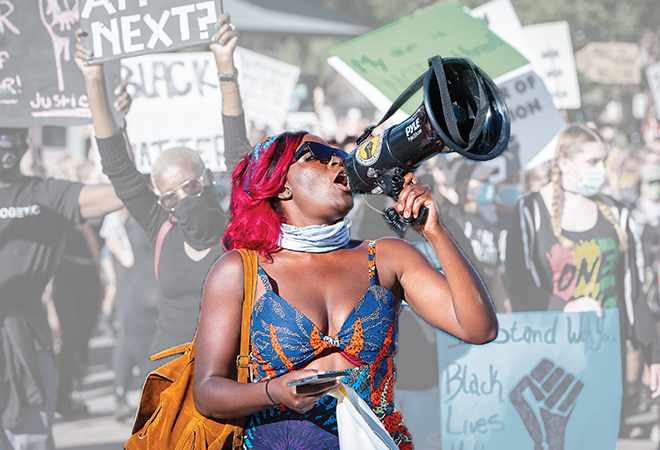 Chloe Nicole Bowman stands on the outdoor stage at the Crested Butte Center for the Arts, microphone in hand, her brilliant red locks contrasting with her black skin like a superhero as she proceeds to lead a Black Lives Matter march through downtown Crested Butte last week.

Chloe asked pertinent questions of the crowd: “Why are we here? Look inward and tell me, why are you here? Are you grieving and looking for support? Are you heartbroken and maddened by the world? Did you come here to try to learn and understand?” She went further to say, “I really struggled to write this speech. I honestly don’t know how not to be angry. How am I supposed to have a conversation with white people that I shouldn’t have to have?”

Born and raised in Colorado Springs, Chloe is a first-generation American whose parents hail from Ghana, Africa. Ghana is an independent country but those who could afford it went to school and got their health services in London, and her father was an engineer and her mother stayed home with Chloe and her younger sister, Priscilla. When her parents separated, Chloe’s mom returned to school to finish her degree to become a preschool educator.

Chloe says, “I lived a pretty suburban life, but that being said, Colorado Springs is the third most conservative city in the nation. Colorado Springs itself is pretty whitewashed, even though it has diversity. Growing up, I was a good kid with a really stable life.”

She attended New Life Church, whose former pastor created quite the national scandal, but she explains, “African people are pious in nature. It’s very inherent to them to have a religious understanding of the world. It’s intermingled with our culture.”

From the time she was 8, Chloe was a figure skater but her mother was strict and very rigid in her belief that education was the priority, so Chloe wasn’t allowed much of a social life. “Social life wasn’t too important to my mom. She didn’t take an interest in my friendships or social skills.” Chloe also played piano for eight years, “because I was forced to at 10 years old,” she laughs. “In high school, I struggled with my parents separating. My home life changed so drastically in the blink of an eye. It was hard. I would have to take care of my little sister while mom tried to readjust.”

There was intramural volleyball in high school for a brief while but Chloe wasn’t able to participate, in the long run. “I wasn’t really able to do varsity or JV because I had to take care of my little sister,” she recalls. “Everything was education-based and again, mom was so rigid and she wanted me to focus on school.” When she graduated in 2012, Chloe chose to attend Western Colorado University (WCU).

“It was a rebellious choice. I picked WCU randomly. My mom was livid,” she laughs and explains that the traditional expectation for Ghanaian children of well-off parents was to attend a prestigious college and become famous in the eyes of the parents, like a doctor or lawyer. Chloe had dreams though, partly of wanting to live in obscurity and on the other hand, “I wanted to move one day to New York City. I had a lot of identity issues in high school. It’s so hard to be a first-generation Ghanaian kid in a white town. You have such conflicting cultural ideologies. High school in Colorado Springs was pretty racist. There was a struggle with people and how they would connect with me. I’d be called the oreo girl, people saying that I acted too white. White kids had a problem with me in their ideals of what they thought it was to be a black person. They didn’t like that I wasn’t fitting their stereotypes.”

Chloe decided on a career as a dental hygienist and took biology as a major, with a sociology minor, also working various jobs to support herself. However, she ended up leaving WCU. “I had issues with financial aid and the trajectory to graduate with a bachelor’s degree because I’d still have to go to a specialty hygienist school.”

She worked at Tenderfoot Preschool, Garlic Mike’s and The Old Town Inn, working all three jobs simultaneously to save up to pay for dental school in Grand Junction, where she received her degree in 2015. “I would live and work in Grand Junction three days a week and then live with my boyfriend in Gunnison in between, so I was back and forth.”

She moved back to the valley as a dental assistant but discovered that the industry was not what she thought. “I always wanted to do something that was meaningful and gave me a sense of purpose, but it turned out to be disheartening.”

Chloe had a few hours left to fulfill her internship for her degree, so she went to work as an unpaid intern for Dr. Faktor while working on the mountain. “And that was great. I was struggling to pay the rent, and that winter was horrible. I took on another job, at Nicki’s Donuts. I was working three jobs in the valley after getting a degree and still unable to pay bills. I had no idea it was going to be so hard.

“People seek out Crested Butte with their expectations,” she continues. “People move here for a transient life experience. I didn’t realize there was a community here that would work and do whatever they could to live here.” She confesses that changed for her when she started working as an infant and toddler supervisor and lead teacher at the Little Red Schoolhouse in 2016. “I’ve always loved children, loved working with children. I’ve always been a nurturer and caregiver kind of person.”

“I woke up infuriated about George Floyd and was glad to see Gunnison had organized a protest. I was so happy to see that the community was acknowledging an egregious wrong,” she says. “What I saw in Gunnison was beautiful. It was intentional and moved me, and it moved a lot of people. I was so thrilled to be a part of that. Racism for any person of color is so profound. You know it without having to label it. It doesn’t need to be discussed—you feel it. It’s a unique feeling to us, it’s something that you just feel without question. I’ve always noticed that whenever a white person is describing me to someone else, or introducing me, the fact that they have to pander my existence in their world to another white person is a perfect example of white privilege and that is our community as a whole. We’re friendly and engaging, but they definitely struggle to acknowledge our differences in terms of being colorblind. People will try to say anything except, ‘This is my black friend,’” Chloe points out.

“I have people accusing me about Black Lives Matter as a trend in my life. I don’t think they’re unaccepting but it’s clear the prevalence of pandering to white elite people is our market, 100 percent the bread and butter. In my current conversations with people who are asking how do we get black people up here, their first thoughts are charity efforts, like raise money for affordable housing or funding people of color to come up to live and ski and try outdoor recreation. There’s a middle class of people of color and why aren’t we marketing to them to come up and visit? Why wouldn’t we market to kids of color in other cities nearby to gain the experience of what it is to be up here? It’s not offered to them. I didn’t know Crested Butte even existed and I lived in Colorado Springs. I didn’t know there were lakes and trails—and my parents could have gotten me up here.”

From her speech during the march, Chloe leaves this thought: “I mourn the deaths of people that look like me and are being killed for looking like me. I am surrounded by people who make excuses for their deaths or choose not to say anything at all. I see their ghosts and I hear their cries in my sleep knowing full well that as black children, we are raised to know we could end up that way. Heartbroken from being hopeful in the first place and dreaming of better. I mourn the lives of children I haven’t even had yet because they will have to live in fear. I’m grieving a life that I may never get to have. And that’s my reality. But if there’s one thing I strive to do it’s to share this with you because being a bystander to this pain we feel is not fair. And having empathy is the first step towards change.”