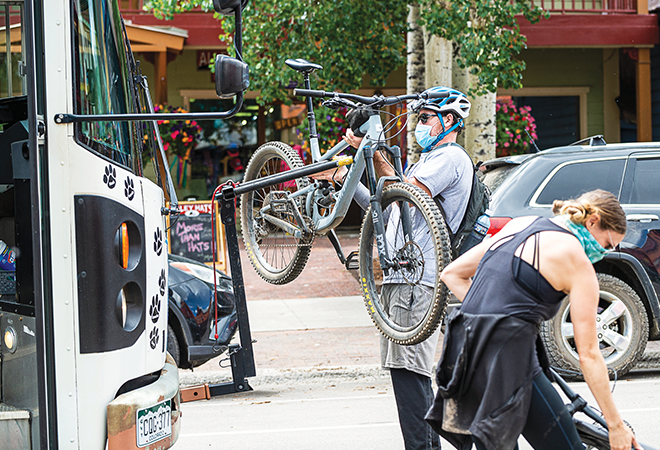 Chaos brings safety and a bus stop gets eliminated

With Crested Butte now three weeks into the great 2020 Elk Avenue reconfiguration experiment, there is still some tweaking taking place as the new look continues to develop. The latest tweak is that the temporary Mountain Express bus stop in the middle of the 300 block of Elk will be eliminated for safety concerns, while some more seating areas will be added to the street.

In an update to the Town Council at the July 6 meeting, town planner Mel Yemma said the look of the street is evolving as more individual businesses step up to enhance the area in front of their restaurants and shops. She also gave an overview of a recent business survey that indicated about 70 percent of the 40 respondents like the reconfiguration, while 30 percent said it was below expectations.

Yemma said the town has had a lot of contact with businesses about complying with the public health orders. She said a three-step education and enforcement policy is in place that begins with written warnings for those not in compliance and ends with revocation of the outdoor seating permits.

“The walk-through we did went a long way in getting the word out. Having Gunnison County health inspector Jenn Chavez and the town marshal do a walk through to check compliance, answer questions and provide clarity around public health orders was very successful. While there were minor tweaks to be made, the majority of the corridor was in compliance,” Yemma explained.

Safety in general and bike safety in particular continue to be a concern. The town is emphasizing that bikes must go with the flow of traffic and head west on Elk Avenue. While it looks like there are bike lanes, there aren’t, and bikes should ride in the primary traffic lane.

“Overall, chaos is good on a slow street. It keeps people aware as drivers and pedestrians,” said town community development director Troy Russ. He explained to the council that chaos is a key principle of a shared street and in combination with a 10 miles per hour speed limit, “The staff is confident in the safety of the corridor. It feels unnerving but that nervousness is an indicator the street is actually safe.”

Russ did agree that it would be helpful if the message about bike safety measures could be put out more by using things like signage on the flower boxes.

Bus stop will be eliminated

One issue the council didn’t think was completely safe was the mid-block Mountain Express bus stop about halfway up Elk. Mountain Express transit manager Chris Larsen said it was a matter of time before there was a close call. The idea of pulling over instead of stopping in the middle of the street could encourage cars to try to pass an unloading bus. “That’s when people get impatient and make bad decisions,” he said.

Larsen noted that when people try to load or take off their bikes from the bus, it delays the stop. Having to load wheelchairs would take even longer.

“My feeling is to abandon that stop altogether,” said mayor Jim Schmidt. “It just jams it all up.”

“It’s being used by riders but from a traffic flow standpoint we might want to abandon it, unfortunately,” agreed council member Laura Mitchell, who also chairs the Mountain Express board.

“It has definitely brought up issues of concern,” said council member Candice Bradley, who is also on the Mountain Express board. ”The stop is being utilized but there are close, official bus stops on either side of that location.”

“The board’s position is to make sure it is safe,” added Larsen. “Safety is the number one concern.”

Council agreed to take that stop away and the signage will come down this week. Council member Mallika Magner said the council could reconsider the decision in two weeks if the bus system felt it was better to have the stop than not.

No luck with a grant and side street impacts

Yemma said the staff spent considerable time applying for a state grant set up to help revitalize main streets in Colorado. She said unfortunately she found out Monday that the grant would not be applied retroactively to money spent before this grant cycle. “That was very disappointing since it is already July Fourth. But we will look for other places that might help pay for this.” Mayor Jim Schmidt said he would bring it up at a Colorado Association of Ski Towns [CAST] meeting scheduled for this week and see if funds could be used retroactively.

Magner brought up comments she had heard about the impacts of increased traffic on the nearby side streets. She said people are seeing more cars going faster on Maroon and Sopris avenues. She asked if “traffic calming” could be added to the streets.

Magner asked if planter boxes could be set up there but MacDonald said the town had no more available.

“How much are they?” asked Magner.

“I don’t know but I can find out,” responded MacDonald. “But it’s not just the cost of a planter box. It is also the cost of planting and maintaining flowers and we cut back on our crews. We don’t have the personnel right now.”

Earley also said that he was told that in the past when the town used planter boxes for traffic calming they didn’t work well and presented a danger, especially to bikers—especially to bikers heading home after an evening at the bars on a dark side street. That was indeed the way it worked.

Meanwhile, Yemma said that as part of the business survey it appeared the suggested September end date for the reconfiguration has the support of businesses. Council approved a return to normal operations for Elk Avenue on September 1 as part of the response plan it approved. According to Yemma, about 27 percent of the businesses in the recent survey are comfortable ending it on that date, while 37 percent were open to continuing it longer and 35 percent prefer to have it taken down before September 1. Council agreed to continue monitoring the situation and will discuss an end date at their first meeting in August.

Share
Previous Working it Out: Public use on private property—Part 1
Next CB council makes masks mandatory on Elk Ave