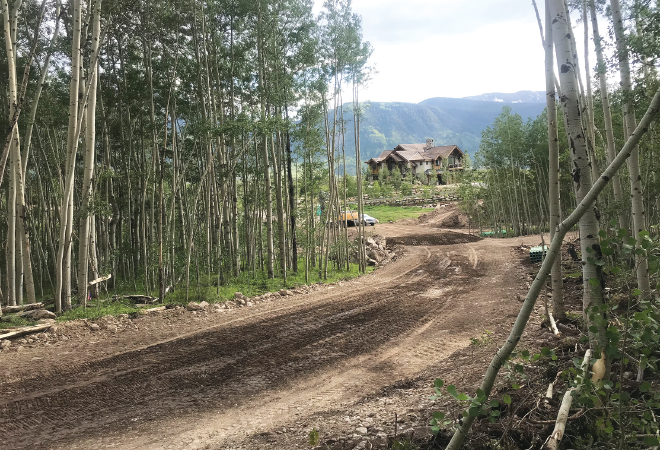 The upper valley has hundreds of miles of trails crossing both public land and private property. As the valley grows, there is at times inevitable conflict between private property owners and public use. There are several examples of private-public conflict that have been worked out, however, and we will look at a few this week and next.

The most obvious change today is the elimination of the Middle Upper Loop to create a new road to access high-end lots in Skyland. But that was actually expected more than a decade ago and an alternative route was prepared long before the recent clearing of trees.

Other trails within the north valley such as the GB loop and Moon Ridge Ranch Nordic trails are being improved and preserved, bringing some good news to trail lovers and underscoring how essential public-private interface is to the area.

Anyone riding or hiking the Bridges or Whetstone Vista trails in the Skyland/Brush Creek area this summer has likely come across closed signs around the Middle Upper Loop trail and a construction site clearing a large portion of the forest there near Grant Lake. The area is zoned for 12 residential properties, and the forested area is being cleared to lengthen Skyland Drive and provide access to those lots for future home sites.

Gunnison County Planning Commission documents show that the final plan of Filing 3, Phase II of Skyland subdivision, referred to as the “Upper Lake Lots,” was approved in May 2004. The applicant was N.D. Enterprises, LLC, part of the golf course industry. It is now owned by GP Crested Butte Holdings, LLC and the development is known as Aspen Ridge at Grant Lake.

Biking advocates worked with the U.S. Forest Service and private land owners to build a new trail to replace it, now known as the Bridges Trail. That trail uses USFS and private property easements as well.

The Middle Upper Loop was a relatively short length of trail that connected the Upper Loop to Whetstone Vista. The Crested Butte Mountain Bike Association (CBMBA) created the Bridges trail as an alternate route in 2014, and now with the Middle Upper closed permanently, Bridges can be either ridden or hiked as an out-and-back or as part of a much longer circuit connecting to the Upper Upper Loop.

“It’s never coming back,” confirms CBMBA director Dave Ochs. “We created the Bridges trail six years ago knowing this,” he adds. “We knew this was private property, and we knew this [land use] was up for a change.” This is why Ochs says CBMBA worked to maintain an alternative trail in the area, and that it was actually a good collaboration.

But given how long it has been since the relocation agreement was made, the clearing of the forest and trail closure that began this spring caught many people by surprise.

“It is a bummer that it’s gone. A lot of people were very fond of using that trail,” acknowledged Ochs.

Ochs spoke with the contractor, Spallone Construction, which is extending the road and adding the utilities. The lots are expected to go on the market in the fall. Ochs said there have been problems with people throwing down signs and cutting the tape in the area that was used to mark it off as construction began. “It’s unfortunate,” says Ochs, as that kind of destruction can jeopardize future projects. “I think it was very generous of the owners to keep it as long as they did. They could have shut it down when we built Bridges six years ago.”

Not all land changes spell the end of public use, however. There are many other collaborations happening in the valley to bring and maintain other areas of private land for public use. Ochs wants to get the word out that the GB trail has been improved and extended due to collaboration between the CBMBA, the Bureau of Land Management and the Department of Natural Resources Division of Reclamation, Mining and Safety (DRMS).

The GB Loop is a 1.25-mile extension to the Lower Loop beginning on Crested Butte Land Trust property and extending onto BLM property. The trail started during the 1990s as a social trail, which Ochs describes as “kind of a user-created route that was never sanctioned by the BLM” and had an old mill site on it.

Tara Tafi, reclamation specialist with the Colorado Division of DRMS, explains that the “pirate trails” running through there ran through a reclamation site the DRMS had completed alongside the BLM, the Coal Creek Watershed Coalition and the CDPHE on the former 1950s mill site and surrounding areas in 2017. The group had consolidated old mine waste and revegetated the area at a cost of roughly $355,000.

The BLM agreed last year to transition the GB trail to a legitimate system route, so the trail was rerouted to avoid the reclamation areas.

“We had some reclamation funding left over and saw this opportunity,” says Tafi. “It was a huge partnership. It’s a really big partnership between so many state, federal, local and non-profit entities.”

Next week we look at how the Strand canal bridge was removed and later replaced, and how one property owner is working to maintain winter Nordic trails—and in the process discovered a new sport.