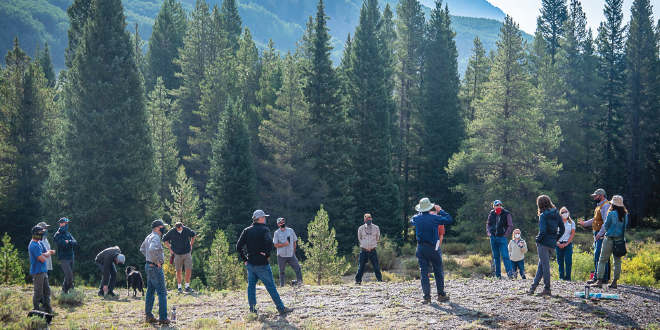 There are worse places to be than above the Slate River near Oh Be Joyful, taking an early morning walk with a big group of people—even if I was the only one wearing flip-flops.

I didn’t know we’d be hiking to a meadow where eight years ago Colorado Senator Michael Bennet and Gunnison County commissioner Jonathan Houck, along with some others interested in public lands management, gathered to start the conversation about developing the Gunnison Public Lands Initiative (GPLI). I thought hanging out by the new BLM bridge at the campground would be as far as we went. But on a gorgeous morning at a place called appropriately enough, Oh Be Joyful, I remembered again why we are blessed.

And then it got even better. The morning group was made up of most of the members of a citizen’s collective that spent literally years debating and drawing up a comprehensive collaborative plan that aims to preserve public lands in many different forms all over our neighborhood. The GPLI uses a couple of methods, primarily wilderness and “special management areas” to keep the access open to a variety of uses and users—from recreationalists, to ranchers, to hunters, anglers and wildlife.

Standing in a socially distanced circle at the spot where it began, Houck reminded everyone that the senator charged them with doing the hard work. Bennet promised back then that he would carry the bill into the national legislative machine if they could come up with a grassroots plan that made sense. So they did. And eight years later in the meadow where he challenged the community, Senator Bennet committed to turn the plan into legislation and bring it to Washington. Promises kept. Standing between the Slate River and high mountain cliffs that led to a wilderness area, Bennet asked the group what they thought of their product and their process.

The men and women standing in the circle that morning spoke from the heart. Motorheads and enviros both choked up at times, describing what started as a process but ended up as a sincere group hug embracing different viewpoints and uses that will benefit all of us.

According to its website, “The goal of the coalition is to protect public lands, enhance a strong and sustainable economy, and support historic uses of public lands. To accomplish this goal, the GPLI aims to create a successful designation that enjoys broad support, is technically sound, and best serves the community.”

The GPLI basically takes 452,221 acres of public land and preserves them for bikers, hikers, snowmobilers, ranchers, hunters and whoever else is out there now. The initiative does not close any roads or trails that are currently open, so existing trail uses would remain essentially as they are now. The same goes for existing over-the-snow recreation and ranching and water uses. It also aims to protect wildlife habitat.

GPLI coordinator Maddie Rehn explained, “Over the years, as the coordinator for this coalition of public land stakeholder groups in the Gunnison Valley, I have observed the GPLI progress from an ambitious idea to a consensus-based vision for public lands in Gunnison County. What was found is that a common passion for public lands is motivation enough to build something meaningful. And through countless hours of meetings and studying public lands in Gunnison County, this group has worked with great care to consider the various ways people enjoy the land and make a living from it.”

Achieving goals through interesting partnerships is part of our history here. One of my favorite pictures from back in the day is of three hardened Gunnison County ranchers in their cowboy hats having a “chat” with longhaired environmentalist Gary Sprung about designating Oh Be Joyful as a wilderness. That collaborative effort was also unique at the time and it brought then-U.S. Secretary of the Interior Bruce Babbitt to the valley to find out more about it.

The ongoing Gunnison sage grouse protection effort is another example of a successful collaboration, as is the CORE (Colorado Outdoor Recreation and Economy) Act that is beginning its legislative journey. The CORE Act protects approximately 400,000 acres of public land in Colorado, establishing new wilderness areas and safeguarding existing outdoor recreation opportunities to boost the economy for future generations. A bunch of it is centered in the San Juan Mountains but it also addresses Thompson Divide on the other side of Kebler Pass and the Curecanti National Recreation Area.

It too was crafted through grassroots collaboration. Houck was also a part of that effort and Bennet is now sponsoring it in Washington. Democratic Senate candidate John Hickenlooper was in Gunnison over the weekend and he touted the benefits of such public lands protection and the need for collaboration to get it done. He noted that it is part of the Colorado ethos to expand and protect public lands in this great state and he promises that will be one of his focus points if elected.

Talking to both Bennet and Hickenlooper for a few minutes privately, I found both were optimistic about how public lands protection can be a place to bring people together. While hiking back from the meadow to the campground with Bennet, I asked if all this positive collaboration would go to waste, given the division permeating Washington right now. He admitted D.C. is a screwed-up place but he said there are representatives on both sides of the aisle, Democrats and Republicans, who understand the value of preserving America’s public lands. He said there could be bipartisan support for good legislation, which is the next step in this long process. And he said that pathway for support would be easier to get because of how the plan came about—through the hard work of grassroots collaboration. It might be easier to find that Washington pathway after this fall’s election, but Bennet expressed real optimism at the opportunity ahead, given the work just completed.

Hickenlooper too expressed the same optimism. He said most in politics realize the importance and benefits of public lands. Hickenlooper described getting out on public lands, like the millions of acres we have in our backyard, as a perfect form of therapy and medicine in these weird pandemic times. The former Colorado governor said he found making alliances with other governors made progress on any issue easier to accomplish. And he felt that was still possible, even in today’s extremely divisive atmosphere.

A brisk early morning hike in flip-flops is not the smartest choice in the world but it is rarely a bad thing. Listening to a cross-section of this community express their sincere love for the valley and telling how they found common ground and respect to preserve many of the things we all love, was a really good thing.

So, thanks to all of them for putting in the long hours and holding tough discussions. Thanks to commissioner Houck for organizing and helping to lead the collaboratives that will have positive lasting impact in our valley. Thanks to Senator Bennet for seeing the value in a group of disparate local citizens finding common ground in a foundation of love of place and coming up with a plan for America’s public lands and agreeing to carry the torch to the next level.

We are all blessed.