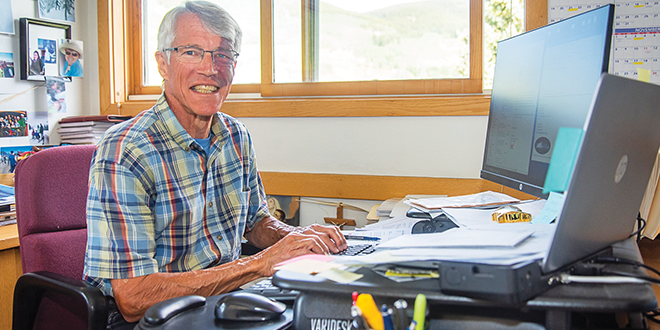 Man of the cloth, community and the mountains

As a little kid having to move a lot, Joe Fitzpatrick says it was a challenge and his childhood memories actually start in third grade. Joe was born in Waynesboro, Va., and his father moved the family quite a bit for work—from Ohio, Washington state and Kentucky, to Minnesota, where Joe finally had the chance to have a childhood with friendships, playing in the park. In those days, Joe recalls, “The boys took their trucks and spent a lot of time in the sandbox.”

Joe was skiing on the Laurentian Divide in Minnesota by the time he was 12. “It was about seven miles from us and it had the first chairlift in Minnesota. That was my sport passion,” he says. In middle school, the ski area developers enticed the kids with talks and ski movies and Joe and a buddy were hooked. “That first year I bought a season pass. Opening day, we got a group ski lesson and we were the only two in the group because it was about 10 degrees below zero but we skied all day,” he recalls.

Joe got a summer job working at that ski area when he was 12, and when he was 13 they gave him a chainsaw to cut swaths of trees for new ski runs. He was also a summer liftie. As a high point in the state it was a summer attraction for the view. Joe was more than happy to work for just a season pass. In high school Joe’s interests were running track but it was all about skiing for him.

After graduation in 1963, Joe attended the University of Minnesota for engineering. “I was strong in math and science but I didn’t know what I wanted to do when I grew up,” he smiles. “By the end of my second year, I was really over differential equations so I took some time off.”

However, the Vietnam War was raging and leaving college meant getting drafted, so he enlisted in the Air Force to train as an electronics technician for fighter jet automatic flight control systems. When he completed his year-long schooling, he was sent to Grand Forks Air Force Base in North Dakota.

“I fought the cold war,” he says. “This airbase had B52 bombers and KC 135 tankers, a refueling jet. We would send bombers full of atomic bombs to fly the Arctic Circle in case we needed to bomb Russia. I was with the Air Defense Command, who were there to protect the airbase and the bombers,” he says. “There were very few people in my career field that were trained in my particular job so my squadron commander blocked all my orders to Vietnam because he didn’t want to lose me.”

While still in the service in Grand Forks, Joe enrolled in night school at the University of North Dakota, receiving his BS/BA in business administration in 1970. He took a job in Minneapolis with Investors Diversified Services (IDS). “They set me down with a bunch of VHS tapes and said you’re going to learn to be a computer programmer,” and he began working with IMB main frames.

“It was science and math stuff so I really enjoyed it,” but, he says, “I didn’t enjoy the big corporate atmosphere,” with too many regulations and buzzers, so in 1975, he switched jobs to work for a small company doing data processing for doctors and dentists.

During the time he was working at IDS, he’d ski on weekends and decided to start a ski club for company employees. He would sign people up and completely organize the trips to different ski areas in upper Michigan and northern Minnesota. “On one of my trips, I had 42 people—40 of those were ladies and I have been married to one of those ladies for 43 years now,” he says of his wife, Beverly.

In 1966, Joe was taken by the movie The Sound of Music. “I had never been to the mountains but after I saw that movie I thought, I’ve got to move to the mountains!” It influenced him to the point that Joe joined the National Ski Patrol and became a volunteer night-time ski patroller at Birch Park, a small ski area outside of Minneapolis. “My goal was always to get a pass. I ended up becoming the ski patrol director with 80 people under me. I also became a first aid instructor for the Red Cross. I taught patrollers advanced first aid.”

To support himself while he was living in Minneapolis in the mid-70s, Joe managed and maintained apartment buildings. It gave him a free place to live and the experience he’d need to land a job at a ski resort, along with Bev’s degree and experience in hotel management.

They set their sights on Snowmass. “We had skied there previously and loved it,” but when one of their tenants suggested Crested Butte, they added it to the list, which also included Telluride.

They headed to Crested Butte first, in July 1978. “We drove into Crested Butte in the evening and as we’re coming down the valley, it just blew us away. We found the Nordic Inn, ate dinner at the Artichoke, got up in the morning and went to the Skicrest Lodge, just to see if there were any jobs for the winter.”

They were sent to Ptarmigan Mountain Properties where they met Glo Cunningham, dropped off resumes and discovered that Columbine Condos needed an onsite manager for maintenance, front desk, reservations and dealing with the HOA. The position included a two-bedroom condo to live in and a ski pass.

They took off to Snowmass and Telluride, where they were offered jobs at both resorts, but the call came in with the job offer for Columbine and they snagged it because, Joe says, “I got a ski-in ski-out condo to live in and what could be better?”

“It was a dream job,” Joe recalls. “If you look at the snowfall records, 1978-79 was one of the biggest snowfalls we had here. It’s January and I’m shoveling snow over my head from the walkway. We did earn our keep. At the end of the ski season, our boss gave us a 30-day vacation and we went to Hawaii and Florida,” he says about the days of real off-seasons.

Joe was promoted to work in the main administrative office doing accounting, but when the snow didn’t fall in the winter of 1980-81 and the resort was dead, they moved to Wisconsin with new baby Katherine, and Joe helped a friend there start a laser machining business. “It was fun getting that started but I wanted to live in the mountains.”

Columbine’s HOA offered the couple a job managing the building and the small family returned in May 1981. Their son, Christopher, came along in 1982. Joe and Bev started their own management company, Solutions, Inc., and Crested Butte Accommodations. When they sold the company in 2001, they were the largest property management company in the valley, with 11 HOAs.

Joe also started a small construction company, Capstone Custom Builders, with his brother-in-law, Vince Rogalski, primarily installing cabinets for Thurston Kitchens. They dismantled the company in 2004, about the same time the Mt. Crested Butte Town Council asked Joe to be the interim town manager, which he accepted and began in July. By August, they hired him permanently. Joe had served on the Planning Commission for Mt. Crested Butte in the early ‘80s, was elected to the Mt. Crested Butte Town Council in 1984 and in 1986 became the mayor for eight years. “I loved the community and I wanted to get involved.”

Joe has held the town manager position for 17 years; however, he says, “I’m retiring September 2. It’s an important day in my life since it’s VJ Day and I was born that day.”

Joe’s faith led him to Catholicism and he became an ordained deacon in 2007. “Becoming a deacon is part of the steps of becoming a priest but there’s a branch, you can become a permanent deacon or take the next step to becoming a priest. Most deacons are married,” he explains and adds, “The main reason I converted to Catholicism is the Eucharist. In the Catholic church, the church Christ began, the Eucharist is believed to be the body, blood, soul and divinity of Jesus Christ. Once I learned that and studied the church history, I asked myself whether this was true—and it is.”

Retirement from town government was a tough decision for Joe because, he says, “I’ve always been extremely active and always loved the town and loved being in this position. I’ve loved being involved with everything going on in town, the future, keeping things running day to day, working with the council. I have a fantastic staff of dedicated people and it’s just been really enjoyable.”

Share
Previous Slate River Trailhead improvements in the works
Next The normal dog days of summer or just a summer daze?