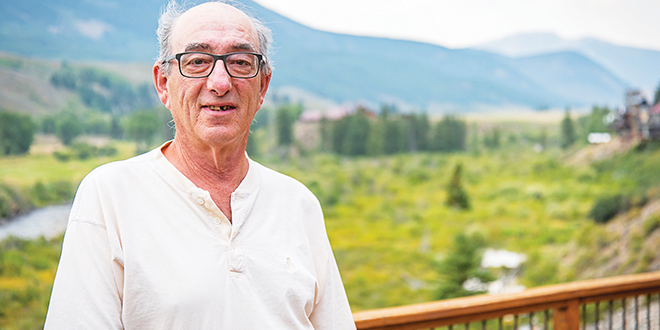 Steve Newman’s deck in Crested Butte South overlooks the confluence of the East and Slate Rivers and he confesses, “I fell in love the first day I came up Highway 135. I remember thinking, I was coming home to a place I’d never been before,” paraphrasing John Denver’s lyrics from “Rocky Mountain High.” He also cites current events as to why he’s satisfied living here these days, saying, “With what’s going on the world, this valley is a better and safer place to live at this time of my life. I could be more financially stable if I got out of this valley but I wouldn’t be happy.”

His thick Brooklyn accent belies his decades of living in the north end of the valley. “I’ve been out of the New York area for 30 years, and I still can’t lose the accent,” he chuckles.

Steve was born in Brooklyn, about a mile from Coney Island, and moved with his family to Bergen County, N.J., just over the George Washington Bridge, when he was four. “We moved in 1957, the same year the Dodgers moved out of Brooklyn—they went to L.A. and we went to N.J. When I was a kid, New Jersey was really pretty and forested but in a short time, it started getting built up. It was the classic 1960s suburbia—one-third Jewish, one-third Catholic and one-third Protestant.”

In the early 1960s, the family loaded up Steve and his brother, Bruce, and took road trips. “Those were the days when you used to drive everywhere. My dad had a lot of army buddies from World War II living in the south so we went to Louisiana once.”

Steve vividly recalls the segregation he witnessed as a child. “We were Jewish, and if we had looked more traditionally Jewish, the anti-Semitism was heavy there then.” In 1961, the family took a road trip to Denver to visit his aunt and both Steve and his brother fell in love with the mountains and Colorado. “I was only seven years old. I was awestruck. It was really magical.”

In 1970, Steve’s brother, aka Bruce the Face, came to Crested Butte with his pregnant wife and squatted in a cabin up Washington Gulch. Steve followed in the summer of 1971, right out of high school. One day, the actual owners walked in and found the happy extended family of squatters who had cleaned up the cabin and made it their home. After talking it out, the owners decided it was a good thing to have them living there since the cabin was on a mining claim that mandated at least $100 improvement every year to keep the claim active, so they let them stay.

Steve returned to New Jersey to attend college for a year, but, he says, “I was rather lost, I didn’t have a major and I didn’t know what I was doing,” so he returned to Crested Butte late in the summer of 1972. “I was looking for a house to rent and found 218 Sopris. The house was owned by Black Bart, whose real name was Donner. He had challenged the Crested Butte sheriff to a shoot-out in the 1960s. Black Bart wore his six-shooter around town,” Steve says of the notorious self-proclaimed cowboy.

There were four people living in Donner’s house but they had never met him since Donner lived in South America for the winters. “Black Bart returned from South America for a couple of weeks, came over and knocked on the door. I knew who he was. He was in his cowboy outfit wearing his guns. Everyone in the house thought he was scary crazy and by that night they all moved out,” Steve laughs. “I was the only one left in that house. The next morning, Black Bart asked if I was going to stay. I said yeah. It was $150 a month for four bedrooms. But the supposed manager, who I never met, never came over to collect the rent so I spent the winter rent-free.” Forty-five years later, Steve is reading a book filled with historic police blotters and an entry listed in 1973 reads, “Donner called the police and wants to know why he hasn’t been able to collect rent in six months.” “The article blamed it on Doug the Bump, but it was me,” he grins.

During the summer of 1972, Steve and his brother worked on the first two condos being built on the mountain, Columbine and then San Moritz. He stayed that winter, working as a dishwasher at Sanchos while his brother was the cook. But in the following spring, unable to make a living, Steve decided to move back to New Jersey. He returned to Crested Butte every summer, “I played on the Trouser Snakes softball team every summer. I did a lot of mountain climbing and fishing,” he says, and describes the joy of finding secret lakes, eating fat brookies and camping.

Back in New Jersey, Steve worked assorted jobs and finally became a welder at the Brooklyn Navy Yard, working on super tankers for three years. He learned TIG welding when he became employed at Chromolly, welding jet engine parts for six years. “I did all the different kinds of welding that they did in that plant,” he says.

While he was back East, music was his focus outside of work. He went to every concert he could, seeing Jimi Hendrix for $3, hanging out at the Fillmore East and the Bottom Line. “I’ve seen about 150 shows there, from Chet Atkins and Les Paul to George Benson, Traffic and Cat Stevens, and a lot of local bands. Even until the 1990s, you never paid more than $20 to see a show. I lived in these clubs. I really grew up in the golden era of music, watching Simon & Garfunkel in Central Park.”

Steve discovered that he can relive those glory concert days after finding those very concerts he attended on YouTube. “Half of the concerts I went to are now on YouTube. Madison Square Garden had great acoustics. I saw the Moody Blues there and Golden Earring opening for Aerosmith.”

Steve was always wondering when he could return to where he wanted to be—Crested Butte—and when his company, Chromolly, had to lay off most of its welders, they asked for volunteers first. Steve raised his hand without hesitation. “I wanted to move back to Crested Butte from the day I left in the early 1970s and the only reason I left is because I couldn’t make a living here and I wanted to be around my parents back East. In the early 1990s the opportunity to move back opened up when I volunteered to get laid off.”

Returning to Crested Butte, he began his painting career with Al Leonetti of Picasso Painting, working with him for 15 years before setting out on his own. Five years ago, Steve finally retired.

Steve found his best buddy in 2006, Eelco, his white Siberian husky who was then just a seven-week-old pup. Eelco is named after the slide guitarist in the band Golden Earring. His cat’s name, Sueleen, is the title of a Golden Earring song.

Now 14 years old, Eelco was recently diagnosed with cancer and given only a few days to live; however, Steve is thrilled because, he says, “That was a month and a half ago. Eelco rebounded and as long as he’s got an appetite, he’s good. Eelco has gone everywhere with me.”

Eelco sits in the front yard, shaded by the house, and gets treated to steak, burgers and anything he wants, including ice cream because it’s how Steve sneaks in the medication that Eelco needs. “I think he’s waiting for the first snow,” he says of Eelco’s stabilization. “I’m still taking him on 12-mile walks. He talks like crazy and he understands every word I say.”

Steve feels that one of his regrets, as a “confirmed bachelor,” is never having children, so when his long-lost cousin called five years ago to ask if he would consider taking her two youngest children for an extended time, he jumped at the opportunity. “I always knew I’d be a good father, and this opportunity presented itself.” Reine was just turning 13 and Mike was 11. Steve enrolled them in the Crested Butte Community School, where they attended for seven months, finishing out the school year and making new friends. “We’re still very close. I loved parenthood. I did a better job than I thought because I took it seriously.”

Steve has watched many a sunrise and sunset from his homey place above the river since 1999 and he doesn’t see himself ever leaving. “I always felt that I could either live in the mountains or by the ocean, it had to be one or the other. I realized I liked mountains better.”