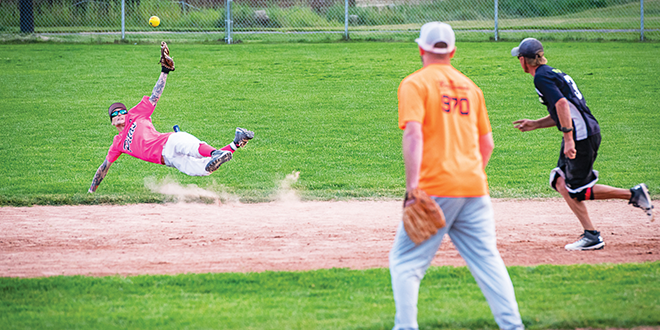 Well, there you have it, the end of softball season, and the one to be known forever as the COVID season. But before we put an end to it, let’s thank those who made it possible to even have a season.

For starters, I’d like to thank the local population—you know, the ones who live here year-round. When Gunnison County became one of the top hot spots in the nation, we covered up, sorta, socially distanced, sorta, and ultimately flattened the curve, sorta. Only to open back up and see another spike, sorta, but we’re trending back down, for now.

Joey Carpenter and Joni Reynolds deserve massive amounts of thanks as well. While the town, the county, the nation and the world were in the throes of COVID chaos, Carpenter continued to draw up schedules, amend league plans, change playoff structures and then do it all over again to try to save local softball.

Meanwhile, Reynolds laid down the law for protocol, listened to plenty of threats from business owners, lone wolves, second homeowners and Americans who don’t believe the greater good is more important than minor inconveniences to conveniences they’d been granted their entire life. God forbid you consider others.

Nope, that was Spock.

But I think I recall when I went to church (that is when the Baltimore Colts were on the road) that God was touted as an ambivalent God and Spock was no less ambivalent. So, given the powers of wild speculation and irrational thought, Spock could very well be the leader of QAnon. Not that QAnon is susceptible to wild speculation or irrational thought.

Regardless, amongst all of the chaos, Reynolds and Carpenter worked to get us some softball, including a playoffs, and now there’s a champion. And, again, it was Pitas, and if you factor in the franchises’ Wednesday title as well, that makes nine titles total for Drew Stichter and company.

It wasn’t a walk in the park for the Meatsticks either. I mean, there were a lot of walks early in their first game of the night against Elevate that led to a 10-run inning for Elevate, but 10-run innings early can be the kiss of death and it was for Elevate. As the game continued, Elevate managed just one run while the Meatsticks clawed their way back into the game to eventually edge out the win in their last at bat.

All under the watchful eye of our Flauschink King Jeffro.

Setting the stage for the fifth game of the season between the two friendly rivals, Psycho Rocks and Pitas Meatsticks. Psycho won three of their four meetings during the regular season but the playoffs are a different ball of wax and Psycho would be missing Eli Fiddler and Amanda Brack, the latter of whom was busy in Denver trying to earn her LPGA card.

After clawing their way back from a 10-run deficit in the first game, the Meatsticks carried their momentum in the second game taking a 6-0 lead in the top of the first inning.

Roland Mason led off with a triple and scored. Scott Sanders doubled, Emily Crooks drove in a run with a single, Stichter cleared the right field fence and the bags with a three-run home run and Thomas McLean capped the early surge with a RBI single.

Psycho Rocks remained calm, the game was early and the Meatsticks would eventually slow down, so they stayed in the hunt led by a series of base hits and a three-run inside-the-park home run (ITPHR) from Ben Hayes.

Kyle Townsend, Montana and Dakota Wiggins all provided key defense for Psycho Rocks to hold the Meatsticks to two runs and then continued to chip away at them in the bottom of the second inning.

After taking a line drive to the face just 15 minutes earlier, Drew Grigsby stepped to the plate to crush a two-run shot over centerfield showing all in attendance what the playoffs are all about, grit. Sarah Broadwell, Jason Keener and Rosa Greeley each singled to reload the bases and Montana and Mallory Zimmerman connected to score two more Psychos to pull within one heading into the third inning.

The game was teetering in Psycho’s direction as they followed that up with a 1-6-3 double play but Sanders cranked a three-run shot to undo all the good Psycho Rocks did and the Psycho bats turned eerily silent.

But the Psycho Rocks team would continue to provide plenty of defensive highlights. In one instance Townsend chased down a pop fly from center only to have it bounce off his glove, then his leg and into Hayes’ glove for the out. The next inning Zimmerman pulled off a charging, bobbling grab as well yet not even those plays were enough because, as they were scrapping for highlights, the Meatsticks kept punching random home runs and doing what they do, winning.

A dinger from Hayes and base hits from Claire Bartholomew and Dayna Regan helped keep the Psycho hopes alive though and by the seventh inning they were down just four runs and in a prime position for a comeback with the last at-bat as the home team.

Ultimately though, Pitas had the last say as Crooks connected for a two-RBI base hit and, for the second night in a row, Frank Magri caught the outfield playing in and drove a two-RBI single to deep left center for an 18-12 lead.

Those last two hits were the last two nails in the coffin as Psycho was tired of trying to reel them in and failed to mount one last surge, as the Meatsticks won another Tuesday/Thursday league title.