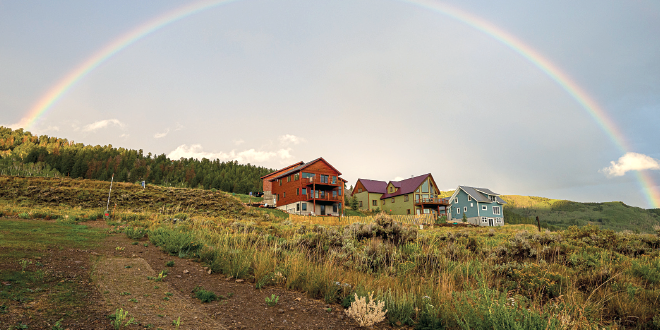 It seems with everyone more than a bit on edge, there is plenty of credit and blame to go around for pretty much anything.

People are already blaming Vail because they missed the first powder day of 2021 (that hasn’t even been forecast by Joel Gratz yet) because they have to make a reservation to hit the chairlift. Horrors! Crested Butte Mountain Resort officials are basically saying that if you pay a modicum of attention, you shouldn’t miss the first foot of fresh next year. Frankly, I’ll give them credit for figuring out how to open a ski area in these weird times when people are driving around in masks and worrying about catching a virus that has had a part in taking lives of people we know in this valley.

I’ll take credit for the rain this past week. About 10 seconds after I finished and put on last week’s front page the story of “severe drought” in the valley, it began to rain. And it was a good, soaking rain. It’s done it more than once since and I can’t figure out why the same thing isn’t happening with the coronavirus, which I’ve written about for months. And now that I’ve written about the rain I see the forecast is calling for sunny skies for the next week.

Joe Fitzpatrick deserves big credit for his longtime service to his home, Mt. Crested Butte. Joe retired this week on his September 2 birthday after 16 years of steady leadership as the Mt. Crested Butte town manager. Since he arrived in town decades ago he has been actively involved in the town, trying to make it better. He’s been a councilperson, mayor and manager. Joe and I are generally political opposites but he is one of those in the valley who knows what he believes and makes no hidden bones about trying to accomplish his goals. I really appreciate that about him and anyone. He is full of integrity (and kindness). Mt. Crested Butte is losing a deep source of knowledge and experience that is rare in these mountain resort communities and I for one think he deserves credit for shepherding Mt. Crested Butte through the recent changes it’s seen in the past several years.

The local Black Lives Matter group deserves credit for pushing local organizations into thought and action through sometimes tense but always peaceful protest and activity. KBUT is changing the name of Soul Train Night; some local businesses are making diversity a conscious part of their business plan; the local marshals are looking at adding a fashionable splash of blue in their uniforms; and the town of Crested Butte will be considering potential action items next week meant to pull up the awareness and process of justice for all and inclusivity. The conversation is happening.

In that realm, if you watched any of the Republican National Convention last week as I did, you saw that the Trumpers did indeed co-opt the term “Defund the Police” and are using it to scare moms in swing states to vote for conservative “law-and-order” candidates instead of more grounded alternatives. Letting Donald use it as a bludgeon that might help him get reelected is a major error and blame can be placed on those so focused on their bubble they miss the bigger picture that could harm whatever movement they support. Words and their meaning matter.

Saw some numbers showing the increase in lodging revenues from the Tourism and Prosperity Partnership. It shows the focus on mountain biking and trails appears to be working in bringing people to the area—which like it or not, is what the TAPP has been charged with and they have been successful. So they deserve the credit, or blame, depending on your perspective.

Looking at how Crested Butte compares to other similar mountain resorts in this pandemic, it looks like Crested Butte is leading the charge compared to similar resort communities. The Gunnison Valley for the first half of 2020 was down about 7 percent in lodging revenue. Telluride, Aspen and Steamboat were all off between 22 percent and 28 percent for the same time. Between 2014 and 2019 the TAPP stuck to its simple trails promotion strategy and lodging revenues grew 57 percent in that time. The data indicates TAPP is meeting its goal of supporting the tourism industry throughout the valley and getting “heads in beds.”

I congratulated TAPP executive director John Norton on the growing winter numbers. I believe that makes the most sense for our valley in terms of growing tourism and supporting local business. I am less enthused personally with the spring and fall increases.

As I have written about for years, I wish his plan and execution wasn’t being so successful with what used to be known as “off-season,” which morphed into “shoulder seasons” and now oftentimes is framed as “the season that reminds me of June in the old days.” I like the locals having some time to refresh and recharge. I like knowing that those living here are not always at work but actually enjoying the reasons they probably moved here. But Crested Butte has been found with help of the TAPP and the people are coming to check it out almost any month of the year. Heck, second homeowners even sued our county when told they couldn’t come here in April because of a pandemic.

While there is blame to be had with the infamous second homeowner postcard sent out by the county at the start of the coronavirus crisis, the county deserves a lot of credit for keeping this coronavirus under control in the valley in the big picture. Some second homeowners point out to me regularly that it wasn’t the order to not come here in the spring that was the issue but rather the demand telling part-time residents who were already here to get the heck out of here immediately. Okay, that was pretty bad and a more than clumsy attempt to make sure the Gunnison Valley Hospital wouldn’t get overwhelmed during a time where nothing was known. It was the start of a pandemic, after all. Still, the county figured it out and pivoted to allow those people already here to stay if they registered so county officials knew what potential impact there would be. Some second homeowners can’t seem to get over that initial error and that’s too bad.

Since then, the county team dealing with the pandemic has stayed the course and kept our numbers under control. We have opened more than most other places and Joni Reynolds deserves big credit for pushing to find the balance this summer of public health and economy. She has done a great job with that balance. The entire team deserves a lot of credit for keeping us safe while allowing business to take place in really strange and uncomfortable times.

So it is Labor Day weekend and that is when we normally see a turn. It is expected to be really busy but it is a sweet time to be at 9,000 feet in the Rocky Mountains, even during a pandemic, protests and a contentious personality-based presidential campaign. Take that fall shoulder season breath and be grateful for the vibrant rainbows and first snow on the peaks. You deserve some credit for picking a pretty nice place to be as we start the new season.