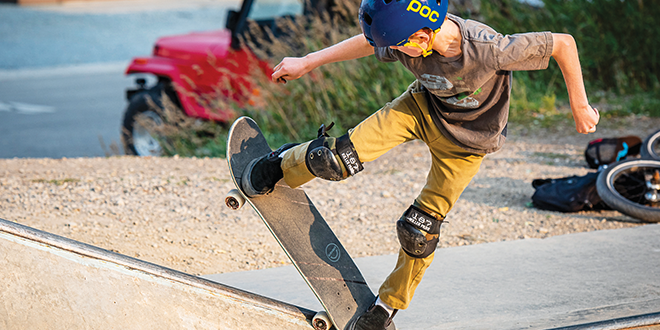 Every Tuesday and Thursday afternoon the Crested Butte skate park, aka Crank’s Tank, is stuffed full with kids from first to eighth grade learning skateboard skills through a Parks and Recreation program. It’s quite the sight, with Hunter Donleavy and Joe Steckdaub at the helm of teaching 30 or so young skaters technique as well as respect for the park and the sport.

Crank’s Tank has quite a backstory and was the result of the hard work and efforts of a handful of passionate skateboarders in 1996.

Hartigan was a part of the initial groundswell to build Crank’s Tank that was led by a guy from Florida named Lenny Byrd and some of his friends.

The energy grew and the Crested Butte Town Council agreed to listen to their request. Hartigan recalls a packed house at the council meeting.

“I couldn’t even get in the room,” recalls Hartigan. “We all showed up in droves and there were people lined up outside.”

The council agreed to give the green light on construction of the skate park and that’s when town manager at the time Bill Crank said his famous quote: “If I go down, you’re going down with me.”

The skaters went to work and completed the park in a feverish pitch in the fall of 1997. So much so that they finished up the deep end in the rain, in the dark, and when they ran out of concrete, they hopped the fence at Alpine Lumber to get more and went back the next day to pay for it.

Crank’s Tank served as a jumping-off point for the people who helped build it as well, as Byrd and others involved went on to start companies such as Team Pain and build parks around the country.

With the park built, Dave White started a youth skateboard instruction program through his skateboard shop The Air Up There. Once he left town, Parks and Recreation took over and Hartigan was called to help get that going. Eventually a youth sports camp, Gravity Groms, took over youth skateboarding instruction, again with Hartigan’s help. When Gravity Groms folded, there was a lull but Steckdaub started doing some instruction on his own until he and Donleavy started talking.

“I had talked about doing something with Joe for a couple of summers,” says Donleavy.

Then, last fall, Donleavy proposed a project to get a kids’ skateboard program going in Crested Butte as part of his capstone class at Western Colorado University—and youth skateboarding was reborn.

“It was dormant for about five years and then we brought it back,” says Crested Butte recreation supervisor Joey Carpenter. “The big reason was Hunter reached out to me through his capstone class. From the beginning he was on board to put in the work and make it happen.”

The summer kids program started the week after the Fourth of July and was kept small due to the COVID outbreak without much promotion, but caught fire as the summer progressed.

“We started out with 15 kids and ended up with 30 and the program was completely full,” says Donleavy. “I was going to be happy if just three kids showed up.”

The success of the summer sessions then led to a call for a fall program.

“I had parents asking me if we were going to do a fall program,” explains Carpenter. “I talked to Joe and Hunter and they were both into it.”

The program garnered so much attention that Donleavy, Steckdaub and Carpenter agreed to create two levels available for kids first through eighth grade. They have 16 kids in the beginner/intermediate class and 11 in the intermediate/advanced class, with plenty of other kids on the wait list.

But the program is more than just about Donleavy and Steckdaub sharing their knowledge and love for the sport. It’s also about rebuilding a positive energy around the sport.

“A big motivation is to create a program that will help create more pride in the park,” says Donleavy.

“The park has gotten a negative reputation the past few years,” adds Carpenter. “We’re super excited to get these younger kids to be stewards of the park. We’re trying to change the message around the skate park.”

In addition, Donleavy hopes that if they can rebuild some respect, they can revisit the discussion with the town to make improvements and repairs to the existing facility.

“We want to clean it up and build momentum for renovations and improvements to the park,” says Donleavy.

For Hartigan, it’s great to see the park come full circle, since his daughter is participating in the Parks and Recreation skateboard program.

“It’s awesome,” says Hartigan. “That thing has been giving back to me my whole life and it’s awesome to see that many kids using it and that stoked. It’s such an amenity for all kids.”