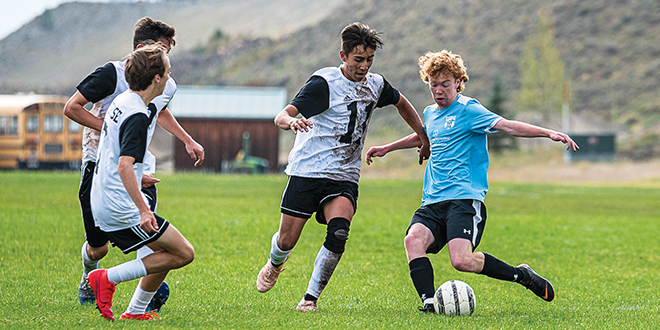 West Elk u19 draws with Montrose

Still searching for the right mix

The West Elk Soccer Association (WESA) u19 soccer team continues to fine-tune their formation and tactics this fall as they match up against a couple of club programs from the Western Slope and I-70 corridor.

The u19 Black team got another test of their progression when they lined up against the Montrose Avalanche on Saturday, September 19 at the community school field, coming away with a 1-1 draw.

The team opened the match in a fairly standard formation asking the players to work the creative process with the foundation in place but the players continued to struggle, making adjustments on their own.

They opened the game with a slight numbers disadvantage in the midfield and therefore resorted to hopeful long balls over the top to strikers Jacob Bernholtz and Blue Gardiner. While the two tried their best to create off of the long ball efforts, the Montrose defense proved too disciplined to allow any seams to goal.

Meanwhile the back four of Asher Weinberg, Grayson White, Otto Billingsley and Eric Lain were equally successful in turning away the Montrose attack and the two teams were locked in a stalemate the opening 20 minutes of the game.

Montrose eventually broke the scoreless draw when a cross slipped through the six-yard box of WESA to a Montrose player on the far post and he tucked it home for a 1-0 lead.

Erratic play continued to plague WESA while they searched for the right mix of possession and long balls with the team resorting to the latter in fits of frustration and headed into halftime locked in the one-goal deficit.

“We did not play an excellent half,” says senior captain Nathan Miller. “It looked like there were gaps in their defense and we kept playing the ball to Gabi, Blue and Jacob up front, hoping they would break through.”

“We started out okay but we weren’t shifting very well as a unit together and were not looking to switch the attack,” adds senior captain Alex Eldridge.

The team remained in their original formation with coach Sam Higby switching things up top finding success with the attacking duo of Bernholtz and Gabi Marmolejo but WESA continued to struggle to find the back of the net. It almost teetered on the brink of destruction when a flurry of five shots in one single attack bounced off the posts of the Montrose goal, leaving WESA wondering if they were ever going to find success.

Then, Higby made a formation adjustment with 15 minutes left in the game and the switch proved fortuitous as WESA’s pressure eventually led to a penalty kick and Marmolejo did the honors, tucking the ball into the low corner to tie the game 1-1.

“The switch allowed us to dominate the midfield more and play out of the back and stop looking for that hopeful long ball,” says Miller.

Both teams failed to break the tie in the final 10 minutes and they were left with the bitter taste of a tie by the final whistle.

“We had so many opportunities but just couldn’t finish,” says Eldridge.

“I thought we were the dominant team on that day,” adds Miller. “We just couldn’t get the finish.”

Meanwhile, the WESA u19 White team had the dubious challenge of facing the same overpowering Colorado Mountain United team from the weekend before and fell 8-0 despite the heroic efforts of Aksel Lindenmeyr in net and Baden Garmhausen and Darshan Narayana in the center of the back four.

WESA Black has the upcoming weekend off from contests as the White team heads to Montrose on Saturday, September 26 and then back to Newcastle on Sunday, September 27.