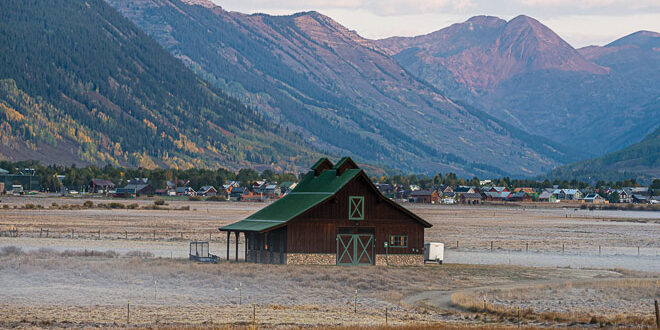 Last week I laid out my reasoning for supporting Jonathan Houck and Liz Smith for Gunnison County commissioner. This week we’ll touch on some of the other issues and races. My feeling is a whole lot of ballots will be filled out and sent back to the county clerk’s office way before November 3—and that’s a good thing. Do it!

On the presidential race—No surprise here: I think a vote for Joe is a lot better than a vote for Donald. Trump has not been entirely horrible—just mostly, in my opinion. It’s like every time he does something good—and for example, I’ll agree with Biden that the administration’s influence in the Middle East with Bahrain and the United Arab Emirates publicly agreeing to normalize relations with Israel is a positive accomplishment—he has to override it with something bad. To me, whatever it is he is building with bricks like the Middle East accomplishments is falling apart because he continuously is taking a sledgehammer to the foundation. His focus on divisiveness, his habit of lying to satiate his ego, his general incompetence with the coronavirus and lack of talent in hiring “the best people” (who all seem to get fired or quit within months) counts. As Republican Senator Ben Sasse said recently about his party’s leader: The president “sells out our allies,” “kisses dictators’ butts,” “mocks evangelicals“ behind their backs, flirts with white supremacists and mistreats women. I’m on the same page as that Republican. Donald’s wheelhouse is conflict and he is continually chipping away at the very foundation of the ideals of an America that is best when it is compassionate, open and a leader among global allies. He is none of that and Joe is. Vote Biden/Harris.

On the vote for our 3rd Congressional District, I’ll agree with another Republican—former Colorado speaker of the house Russ George. Republican Lauren Boebert is facing Democrat Diane Mitsch Bush. Boebert is a staunch conservative who talks loud and carries a gun. She touts the fact that she is sick and tired of compromise. Her biggest accomplishment is apparently standing up to Beto O’Rourke. Wow! Meanwhile, Bush gets credit from both Republicans and Democrats for finding good compromise solutions as a state legislator and that matters in politics if you want to accomplish things. Bush wants to accomplish things like protecting Colorado’s environment, protecting our public lands and access to clean water, lowering prescription drug costs, passing DACA into federal law with congressional action. Republican Russ George of Rifle (Boebert’s hometown) has even endorsed Bush. There I go again agreeing with another Republican. Vote Diane Mitsch Bush.

Take away the garbage political ads from both sides and the race for Colorado’s senate seat is between two normally decent candidates. Both can be moderate and both have worked across the aisle. But for some reason Cory Gardner, like so many Republican figures, keeps choosing to suck up to Donald and that is a big detriment. He will likely eventually wonder what the hell he was thinking. He is also conspicuously not helping with the CORE Act, which directly benefits us. When in Crested Butte this summer, Gardner dodged an opportunity to meet with local constituents who disagreed with him. Lame. John Hickenlooper has shown he is pragmatic and down to earth and he understands that Coloradans value things like public lands and public health care. Vote for Hickenlooper.

Here’s a quick rundown of where I lean on the ballot issues after spending some time in the Blue Book and consulting with some local people impacted by the measures, including Republicans:

—Amendment B: Repeal the Gallagher Amendment. My initial instinct was a Yes but this is tougher than it looks, so No. As it stands, the unintended consequences of the Gallagher Amendment have not been good. It has burdened businesses because of the mandated disparity between residential and commercial property tax rates. It’s not been a good practice over the years and this measure could help rural communities without much business base. That’s not us. When I reached out to longtime conservative Crested Butte businessman Eric Roemer, who I assumed would support the measure, his thought was that he’d be voting No. “After reading the details … the impact on business taxation will change very little as the assessment rate will remain at 29 percent. What will change is that it is a money grab at the state level and the residential property owners will be the ones getting tagged. Residential property taxes will increase significantly, which will burden homeowners as well as renters…” So as written, the property taxes on your house will not adjust down with this repeal and could go up much more as prices here skyrocket—and businesses won’t see much, if any, relief. Our community is good about considering and passing tax hike requests (such as for local schools) if the reason is valid — and that’s a better solution for us than this.

—Amendment 76: Citizenship Qualification of Voters. No. The big takeaway is that if passed, 17-year-olds who will be 18 in November will no longer be able to vote in the primary election. Let the young citizens stay engaged with the democratic process.

—Amendment 77: Betting Limits. Yes. One of my vices is the occasional bet. Let the state’s gambling towns be gambling towns. Plus much of the money raised will be targeted to community colleges.

—Proposition EE: Nicotine Product Tax: Yes. Smoking is not one of my vices. Sin taxes are easy marks and this one would help fund education, housing, tobacco prevention, health care and preschool.

—Proposition 113: National Popular Vote. Yes. Not an easy decision given our small state status but it seems fair that when picking the president, every vote should count equally. Small states get more U.S. Senate representation per capita so the winner of the country’s top elected office should be the one who tallies the most votes of the citizens.

—Proposition 114: Reintroduction of Gray Wolves. No. While I personally have no issue with wolves in the local backcountry, ranching is a keystone industry and characteristic of our valley. I asked around and local ranchers do not like this idea. Wolves and ranchers don’t mix well. Our ranchers use a lot of the public land around here and that’s a good thing. Wolves already live in parts of Colorado. Don’t spend the money to “reintroduce” what is already here.

—Proposition 115: Abortion prohibition after 22 weeks. No. Women and their doctors should make their personal health decisions, not the state.

—Proposition 116: State Income Tax Rate Reduction. No. Hell No. The majority of Colorado citizens will see a savings of less than $50 per year. About 2 percent of Coloradans, the richest 2 percent, will pocket more than half the total tax savings. It will hurt state services. This proposition is not good for anyone except the already rich.

—Proposition 117: Voter Approval for Certain New State Enterprises: No. It’s another measure like the TABOR Amendment meant to hobble government.

—Proposition 118: Paid Family and Medical Leave Insurance Program. No. It sounds good but the cost can be significant on every employee who works in a large business. And those employees may never see a dime of it. I’ll go with former Crested Butte mayor and state senator Linda Powers who is a lot more liberal than me and said while it’s a good idea she is not a fan of the proposed execution.

—7A: Colorado River Water Conservation District tax. Yes. This one is not in the Blue Book but would provide a valuable tool for protecting our water. And water is important to us on the Western Slope. While we may not think about the need to protect the water we see running through the valley, it needs protecting and is something every single one of us values. It is worth the small increase in property tax to keep quality water in our watersheds.

There you have it. Take it for what it is worth and do your own research and then, no matter where you fall on the people and issues, get out and vote. And it really will help the county stay ahead of the game if you vote early.