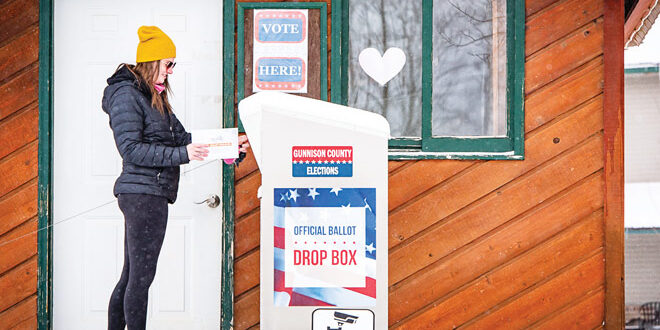 Accounting for every ballot

The 2020 election ballots keep rolling in to the Gunnison County clerk’s office at a rate of almost 1,000 per day and it is anticipated that more than half the expected votes will be turned in by the end of this week.

As of Wednesday, October 28, 7,100 ballots had been returned and tabulated in the county. In 2016 there were 9,738 ballots cast. The majority are being deposited in the ballot drop boxes located at both ends of the valley, with a few trickling in through the U.S. Postal Service.

“It is so great to see so many people voting early,” said Gunnison County elections director Diane Folowell. “Crested Butte tends to vote later but this year we are seeing a large early turnout. Down here in Gunnison, people are also returning ballots in big numbers already. Who would have thought that the main voting station would be a parking lot? But it is working really well.”

The county’s primary early in-person voting site and drop-off location is the Blackstock Government Center, across from the Gunnison Post Office. Teams of election officials are monitoring the parking lot from a centrally located tent and directing people to the drop boxes or a place to cast their vote in person. No one is allowed to drive a vehicle into the parking lot if there are political advocacy messages on the vehicle. So, for example, someone with a Biden or Trump bumper sticker cannot drive into the voting area.

Folowell credits a new signature-scanning machine purchased this year for letting election officials keep up with the huge numbers. As election judges bring in boxes filled with ballots to the official election room, the documents are organized and fed through the AgilisDuo machine, which scans the signature line. From there, two election officials, one Democrat and one Republican, can compare these signatures from previous signatures. Without the machine, the process that takes minutes for hundreds of ballots would instead take hours.

On Tuesday morning, the machine kicked out a half dozen ballots for review. County clerk Kathy Simillion said the judges then inspect the ballots that are flagged and if there is a problem beyond, say, a torn envelope, the voter is contacted and asked to rectify the problem. Voters have eight days beyond Election Day to make their ballot right. On this particular Tuesday, it took the officials about 10 minutes to locate one ballot that was flagged by the machine but a coordinated search located it in a bin with a few other problem ballots.

“Everything has to be accounted for before we move on,” explained Folowell. “There are a lot of checks and balances in this system. It is great and works extremely well. We can track down any ballot and any issue.”

Gunnison County’s relatively small signature-scanning machine still cost about $60,000. “It has been a life saver and was a great purchase by the county. We will be able to upload the early results probably a half hour after the polls close on Election Day next Tuesday.”

Folowell understands there are some people who will not vote early and will cast a vote only on Election Day. For Tuesday, the drop-boxes will be continuously checked and it is expected that the tallying process will be nonstop all day. The election judge team of 35 people hired for this election and paid $14 an hour will have had plenty of time to practice their role in the process, so Folowell expects a smooth Tuesday on the horizon.

By the end of day on November 3, Folowell expects to have counted between 13,000 and 14,000 ballots. She is confident that by the time you read this, the county will have collected and counted close to 8,000 of those ballots.

“I’m confident we will know who won in our county by Tuesday night,” Folowell said. “We have a great team and understand how important it is for people to have confidence in the voting process.”