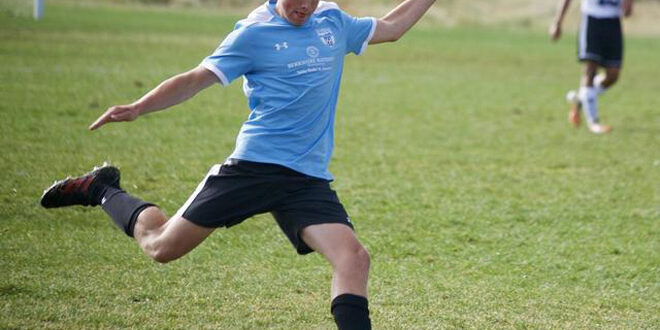 “I think it bodes well for the spring season”

The fall season came to a close for the West Elk Soccer Association u19 boys’ soccer teams at the CSA Cup in Durango last weekend. The u19 White team secured their first win of the season and while the u19 Black team had only strung together two wins during the regular season, they rattled off two wins on Saturday, October 24 to earn a spot in the finals on Sunday, October 25.

The tournament provided a fresh opportunity for the WESA side as they spent the fall season playing a series of games against the same three opponents. Durango brought in teams from throughout Colorado and New Mexico, giving WESA a chance to see some new competition and put everything they worked on throughout the fall to the test.

“It was great to see some new opponents and not just the same 12 people over and over again,” says midfielder Nathan Miller.

Saturday morning was their first challenge, as they faced the Rio Rapids, a club team combining players from Durango and Bayfield. WESA took all they learned from games against faster and physical opponents during the regular season and applied it in their match against the Rio Rapids, setting the pace for the game from the opening whistle to the final.

From the start the WESA midfield found time and space to dictate play with quick passing and an uptick in energy. Rio Rapids scrambled to keep up and were successful in turning away WESA through the opening minutes of the game but the constant pressure and pace eventually bore fruit for WESA, as a shot on frame was bobbled by the Rio Rapids keeper and Jacob Bernholtz followed to poke it in.

WESA took their 1-0 advantage into the second half and added to it when Bernholtz found the back of the net again to put WESA up 2-0.

With the back line of Eric Lain, Otto Billingsley and Trent Pulliam securing the game at the center stripe, WESA carried possession through the rest of the second half and continued to knock on the door of the Rio Rapids net. They never did score again but cruised to the 2-0 win, gaining additional confidence for their next match of the day.

“I feel like we didn’t play as well as we could have but it was nice to get the win and I think it raised our confidence for the rest of the tournament,” says Miller.

WESA returned to the field at 1 o’clock that afternoon to face the New Mexico Kings, and while it appeared the Kings had a size and speed advantage at first, WESA’s efforts with possession soon eliminated any perceived edge of the Kings.

WESA scored midway through the first half when a series of passes through the midfield found Rowan Featherman slipping through on the weak side flank. Featherman’s first shot was turned away but he followed on the rebound to punch it through. The Kings were awarded a penalty kick soon after but WESA goalie Alex Eldridge turned away the attempt and WESA carried their 1-0 lead into halftime.

They maintained their possession advantage in the second half to score two more goals in the first 20 minutes of the half. After Jamis Matlock’s chip through to Gabi Marmolejo was turned away, Matlock jumped on the loose ball to drive a volley past the outstretched hands of the Kings’ keeper from 20 yards out and a 2-0 lead.

Ten minutes later, Marmolejo dropped the ball back and turned to run to the corner. Two quick passes got the ball back to Marmolejo driving to the end line and he slotted a low pass to Nathan Sawyer at the 18-yard mark for Sawyer to slot home for a 3-0 WESA lead.

The Kings responded, scoring with 15 minutes left in regulation to close the gap but WESA’s backline and midfield held off any additional attacks to seal the 3-1 win and punch their ticket to the finals on Sunday.

“They were fast and big but not very skilled as a team,” says Miller. “We were able to move the ball quickly through the midfield and not afraid to drop it back to defense and keep possession.”

Following a series of games Sunday morning, WESA found they would meet the Kirtland Broncos out of New Mexico in the tournament finals. Kirtland had handed the WESA u19 White team a 10-0 loss at the start of the tournament so WESA Black knew the Broncos would be a tough opponent. In addition, Marmolejo’s ankle injury had grown worse over the previous day so his availability as a striker was limited, leaving the team hampered even further.

“We were confident but nervous because they had beat our White team by so much,” says Miller. “But our confidence was riding high going into the game.”

Energy from both teams was high for the opening 10 minutes and it was clear that the Broncos held a speed and size advantage. Nevertheless, WESA matched them in the opening minutes and struck first when Bernholtz sprinted through the Broncos back line to take a pass from Matlock and slip it past the keeper for a 1-0 WESA lead.

But as the battle continued, the Broncos’ speed and size wore down WESA over time, disrupting WESA’s attempt at a more composed style of play. The Broncos would end up scoring three unanswered goals over the rest of the game and could have scored a fourth had it not been for another penalty kick save from Eldridge.

WESA did punch through for a couple of more chances but their shots were turned away and they ultimately fell 3-1.

“They were skilled individually and worked well as a team so it was a hard game,” says Miller. “I definitely think we still could have come away with the win. We had our chances.”

“They played out of their skin in that game,” says White team interim coach Tom Lewis.

The players now take a break for winter, with some WESA programming planned to keep the kids engaged through the snowy months as they prepare for the high school season, set to kick off on March 1, hoping to build off their progression this fall.

“I think it bodes well for the spring season,” says Miller. “We’re a small team and we’re definitely young but I still think we should do well.”